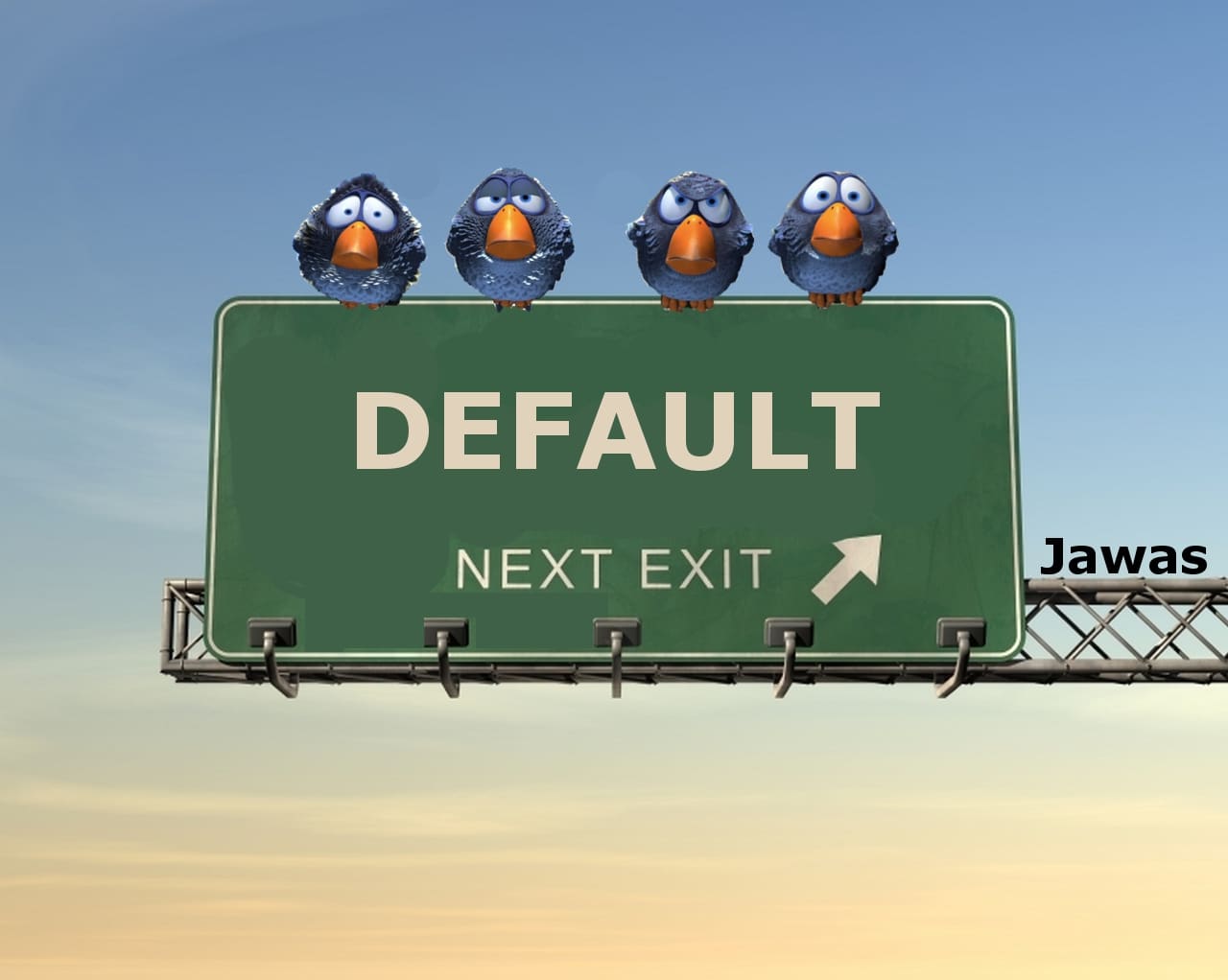 We’ve just had another big downgrade: Reliance Communications. The telecom stock hit an all-time high of Rs. 800 in the euphoric bull market of 2007 and while the markets recovered, many stocks including RCOM couldn’t make it. And now, it’s fallen to Rs. 20 just as rating agencies downgrade it to “Default” grade. 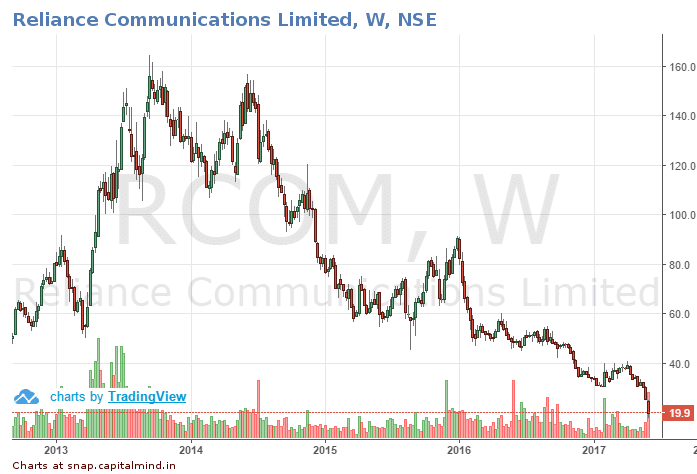 Reliance Communications (RCOM) was the brainchild of Mukesh Ambani but slipped away from him during the family split with his brother Anil Ambani, whose group now runs RCOM. RCOM had launched with great fanfare and a stunning 500 Rupee offer when it started operations (2005). By 2010, it was the 6th largest operator with a market share of just 3.87%. The Indian Telecom sector has for long worked on thin margins with competition always trying to take away market share from the weaker players. The government didn’t do any favours by trying to maximize the revenue it could get in Spectrum Auction by providing spectrum that wasn’t enough for everyone, and auctions were bid at very high prices.
The consequence: the high payments meant highly leveraged balance sheets of the telecom majors who took on huge amounts of debt to pay up.

And then came in Reliance Jio – the older brother, Mukesh Ambani, decided to get back into telecom with his own business, and cut rates again by a huge amount. That hit all the telcos.
Vodafone and Idea decided to merge, Airtel, the leading operator bought out Telenor India and also acquired Spectrum from Videocon and Aircel to boost its operational strength. Aircel and Reliance Communications will now merge their wireless assets. (Reliance Comm also has wired assets like FLAG, the undersea cable link that it bought a while back)
These mergers may be the only way for RCOM (or the others) to survive.

Reliance Communication burdened with huge debt has been for long trying to reduce the burden by offloading assets such as Towers. They have reportedly sold their towers to Brookefield, and should receive Rs. 11,000 cr. for it – which they think will come by September 2017.
They will also hive off the wireless business into a 50-50 joint venture with Aircel, which will take out debt from RCOM (of Rs. 20,000 cr. or so) and move it to this joint venture.
The financials have been crazy. With over Rs. 42,800 cr. of debt, they have an interest cost of over 3500 cr. per year. EBIDTA for FY17 was about Rs. 5300 cr. and with depreciation of 4221 cr. , the company saw a full year loss of nearly Rs. 2,400 cr.
Q4 has been brutal: Their EBIDTA was just about Rs. 900 cr. against interest payable of Rs. 935 cr. – meaning that on an operating basis, they are just about using their operating profits to pay interest.
As a percentage of operating income, Interest burden was 0.14% for the year ended March 2007, this has jumped to 72% for the year ending 2017. This clearly is unsustainable.
Reliance has communicated that while it is under financial strain, it will not default on the loans. They expect to pay back Rs. 25,000 cr. once they demerge the wireless business and get the cash for the towers business. That will reduce their debt profile but investors don’t seem convinced.
Note: This isn’t the first time that RCOM has tried to unwind its Tower business. It tried first way back in 2007 with some US Global Telecom giants. That didn’t see the light of the day. Another serious attempt was in 2010 when it tried to do the same with Global Tele. That too didn’t play out. Would this deal happen? Third time lucky?

And Now: The Cash Crunch Makes A Technical Default

Yesterday, CARE and ICRA downgraded the credit ratings for Reliance Communication, Reliance Telecom and Reliance Infratel to “Default” status.
Links: CARE, ICRA: Reliance Communications, Reliance Telecom, Reliance Infratel
While the credit agencies downgraded the company yesterday, this was a very much delayed action given that RCOM is supposed to have defaulted on payment of interest on debentures (disputed by Axis Bank, the Trustee for the Debentures) in February 2017.
They paid up in April. But the rating agencies took till May 30 to recognize this as a default. Sounds like they woke up now.
The default is technical – it’s about money that has been paid, but paid late. The stress is evident, but RCOM isn’t in default yet.

The IMPACT: Nothing Much On Banks, or Mutual Funds

42,000 cr. is a lot of debt. But it’s well distributed, apparently. Bloomberg has posted the list of banks with their exposures to Reliance Communications, and that shows that banks only have a collective exposure of Rs. 14,000 cr. to it.
While SBI is the biggest player, an actual default will hurt smaller banks like Yes Bank or IDBI Bank a lot more – an 800+ cr. NPA will be a fairly big addition to their list of bad loans. However note that there will be no need, currently, for any bank to call this a bad loan – they are not behind on loans (apparently) and banks need a three month period of non-payment to call something an NPA.
However, RBI has asked banks to provision more for telco loans and this might force all the banks to add a higher provision for such loans.
Addition to Banks, some risk is also borne by funds and Institutions who hold Reliance Communications bonds.  While no Indian fund-house has direct exposure to Reliance Communications Bonds, some do have exposure to Structured Obligations that are directly related to Reliance Communications.
Two key bonds where this exposure is seen are
12.35% Reliance Inceptum Pvt Ltd (04-Aug-2017)
12.33% Reliance Communications Enterprises Pvt Ltd (22-Dec-2017) (Promoter company of Reliance Communications)
Franklin Templeton holds nearly 600 cr. of the second bond. It’s backed with RCOM and RELINFRA shares, and promoters had about 64% of their shares pledged. Meaning: more shares can be pledged to make up the difference. Given that these bonds are not actually downgraded (yet), Franklin may not have to mark down their bonds.
It doesn’t look like this downgrade has a major impact on bonds or banks yet. It will however impact any further bonds that RCOM sells – since mutual funds will not want to buy, and banks will see a lower rating mean higher provisions and hike rates.

In 2015, Reliance Communications raised $ 300,000,000.00 by selling 5 year bonds with an interest rate of 6.5%. These bonds are listed on the Singapore Stock Exchange and currently trade with a Yield to Maturity of 20%. In other words, investors are assuming a definite haircut or a risk of some sort of default. It’s way too early to summarize how this story will play out. After all, big infrastructure firms have been in default for a long period of time with no solution being seen on the horizon.
At Rs. 20 this company trades at an “option” value. If it turns in terms of lower debt or such, it might give you big returns. If it falls it might just have to go down to a shareholder value of zero.
If banks convert their debt to equity, a 20,000 cr. converted would result in current shareholders getting diluted by 80%. However if they are able to hive off the entities well and get their debt reduced, the resultant entity might be able to service debt. We say “might” because we don’t know what things will look like.
Given this situation, a shareholder has to see if the shares are worth their “option” value. It’s a highly risky play that needs a sudden spate of good news for things to work out. Things are remarkably good in this bull market, and RCOM hasn’t performed – it’s not clear what kind of miracle it would take for this stock to move up.