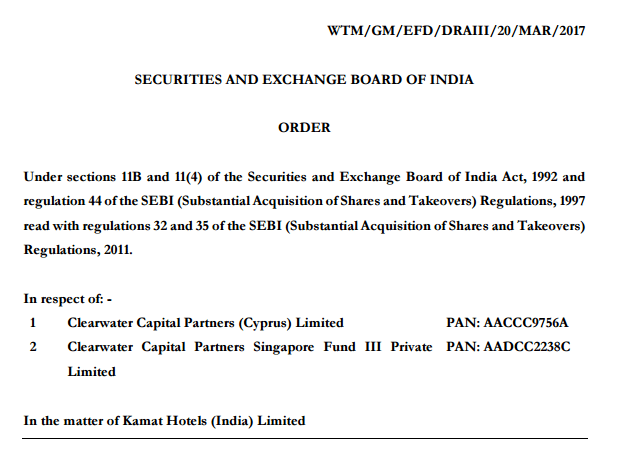 News often flows about large institutions selling shares. Sometimes its innocuous – they sell to each other, as one exits and another enters. And then other times there’s a real intent to sell – but when the sale comes up in the bulk deals section on the stock exchange, you have to ask yourself: What made them sell so their transaction appeared in Bulk deals?
The bulk deal revelations tell you who sold or bought shares (greater than 0.5% of the shares of a company). If you’re in the process of selling shares, you don’t want to reveal any information about your sale until it’s over. So why would you advertise that you, as an institution, are selling?
Today we look at three bulk deals each with a unique story to tell. In addition, we will also take a look at the exits made by shareholders of recently listed companies now that they have cleared the 1 year lock-in hurdle.

Well, here is the backstory. There has been some clarification made by the market regulator SEBI in the case of the conversion of the FCCB held by Clearwater Capital. Sometime in Feb-2010, Kamat Hotels converted the bonds held by Clearwater Capital at Rs. 135/- per equity share. Clearwater then got more than 32% and made an open offer to buy more shares. But SEBI blocked it saying that Clearwater effectively controlled the company through some agreements that allowed it to veto key decisions. The SEBI block meant that Clearwater couldn’t sell when it wanted to.
SEBI in its latest circular confirmed that the agreements didn’t actually cause a change of control, so Clearwater could now sell shares. Catch the complete development here. This update from the regulator came less than a week back thereby clearing the path for Clearwater to liquidate a major position held for almost 7 years now. (The price is still lower, below Rs. 50 per share)
Clearwater could have cleared the necessary stake quietly over a period of time in smaller quantities. But they even with big sales each day, they got a better price from the earlier time. This stake sale also was not surprising as the FCCB’s were converted at more than 2x the price seven years ago, and the investor would have needed to recoup what was left.
Lesson learnt: Regulation can be throw you off. Selling Kamat Hotel shares now was more about getting regulatory clearance than of actually believing something was wrong with Kamat Hotels today.

This deal is between IFCI Venture Capital Fund and MBL Infrastructure
Back in May, 2016 we highlighted the perils of excess pledging which resulted in MBL tanking 75% in a year. Noticeably this was when 83% of promoter shares were pledged.

This did not stop the promoter from further pledging their shares and on the 9-Aug-16, the Promoter Anjanee Kumar Lakhotia pledged a total of 1,915,000 shares or 4.62% of the share capital with IFCI Venture Capital Fund and another round of 20,000 shares or 0.05% on the 13-Feb-17 to the same entity.

In India, pledging happens for a variety of reasons. One major one is as collateral to the debt taken by the company. Such collateral is usually sold if the stock tanks. And that’s what seems to have happened.
From the August price of Rs. 77, the MBL Infra stock has fallen to Rs. 42. And that has triggered a sale.
IFCI Venture Capital Fund on the 11th, 12th, 13th and 17th  sold a total of 1,321,451 shares or 3.19% of the share capital.
This was surprisingly a difficult find since we were unable to locate the Venture Fund in the shareholders table on the exchange or in the Annual Report. Even though this was part of the disclosure submitted for the pledge of shares a year ago.
Also the only way we have been able to figure out this action was through the bulk deals. Neither the company nor the Venture Capital Fund provided a disclosure or update as to this pledge revocation.
The Pledging Killer: Yes Bank and Jyoti Structures
This is a story similar to the MBL Infrastructure. On the 14th July last year, Valecha Infrastructure – a promoter owned entity, pledged a total of 5,431,400 shares or 4.96% with Yes Bank. On the 18th April, 2017 Yes Bank sold 1,000,000 thereby realizing a meagre Rs. 1.04 crore. So why did Yes Bank liquidate a part of the pledge? 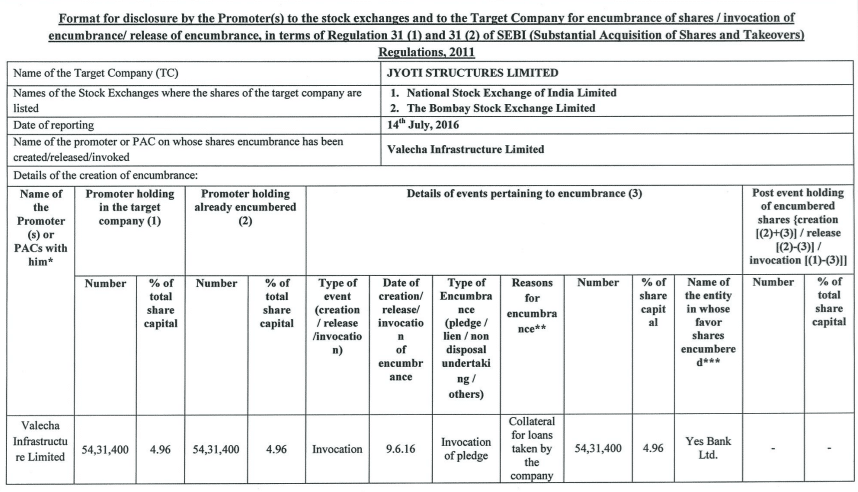 That is because, as reported by Financial Express, a consortium of entities are looking to cut their losses from the debt laden company which had a gross debt stood of Rs. 6,917 crore (including interest overdue) at the end of March 2016.
Jyoti Structures had defaulted on debt, and banks are in conversation to invoke Strategic Debt Restructuring. But the banks haven’t converted debt to equity (a process under the new SDR) and instead, tried to look for sellers themselves.
Essel Infraprojects and Shriram EPC are eyeing a stake in the restructured company, but nothing’s moved so far. Promoter pledge in the company is 83.70% as of March, 2017.
About a month back, Jyoti Structures asked for time till April 17 to finalize buyers. That hasn’t happened, and it looks like Yes Bank has taken all those pledged shares, invoked and sold them.
Lesson: When a financial institution sells shares, look carefully at the pledge status. It’s quite likely that if the stock falls suddenly, lenders will invoke and sell.

There are 9 companies that have been listed since the end of December, 2015 which makes them ripe for the investors now that the 1 year lock-in period has lapsed.
Here are the transactions of some of these recently listed IPOs which has seen its pre-IPO investors liquidating some part of their holdings.

Dr. Lal Path Labs witnessed some exchange by its investors Wagner and Westbridge to the tune of 1.36 lakh shares with Westbridge raking in the moolah. In fact Wagner in its press release just today confirmed its new stake down to 5,604,165 shares or 6.77%.
On HCG or Healthcare Global Enterprise, PI Opportunities Fund or Azim Premji’s Family Investment Office i.e. Azim Premji Invest which was one of the anchor investors in HCG, liquidate a major stake and transferring the remaining 66.54 lakh shares to the Prazim Trading And Investment Company – another company belonging to the same family office.
Infibeam witnessed its Chief Operating Officer – Sachin Pukharaj Oswal liquidating 275,262 shares on the first anniversary of the company’s listing on the bourses.
Equitas Holdings – the only financial stock in the above list, witnessed sale by CMD – a Mauritius based entity that had received the transfer of the holdings from Canaan Partners, Mauritius.
The idea is: Shares held by promoters and early investors are locked in for a year after the IPO. When they get unlocked promoters or institutions tend to sell. And that’s what has happened in many recent IPOs.

Institutions sell for a number of reasons:

In general, these are not causes for immediate overreactions. It’s the analysis of “why” that helps more than a knee-jerk reaction.