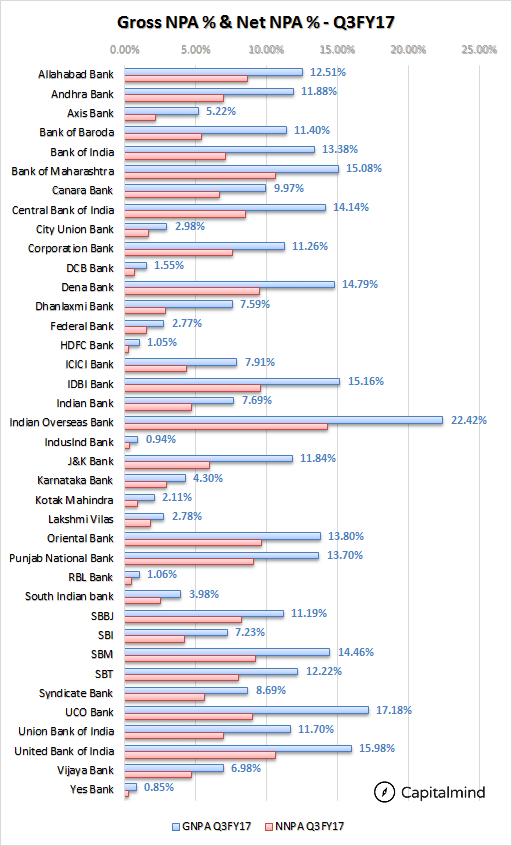 RBI has made an interesting notification, requiring banks to disclose if they didn’t provision for bad loans as much as RBI thought they should.
The notification says that:

This will come in Bank annual reports from now on.
The NPA situation has been very high already. Here’s how it looked. (Read Our Premium post) And this has already hit banking somewhat. Yesterday, when Yes bank announced results, it had to take a hit of about 911 crores in extra provisioning. Yes Bank has a 911 cr. exposure to someone – we don’t know who but the guesses are it’s part of the JP Associates group. That someone is an NPA according to RBI.
Yes bank doesn’t agree.
But Yes bank has had to name that as an NPA, which nearly doubles its NPAs to 2018 cr.
They provision only 25% on this loan. Yes Bank expects to recover it soon, as JP Associates is closing a deal to sell its cement plants to Ultratech. Yet, the extra provisioning is likely to help if that deal doesn’t go through right or in time.
JP Associates has a lot of debt – over Rs. 50,000 cr. If all entities lending to JPA are going to have to make provisions of 25%, that will be a hit to the profits of the banking system by over Rs. 12,000 cr. Remember, it’s otherwise considered a “standard” asset – where interest is being serviced on time.
Hopefully, this will help bankers push the management to ensure the deal is done in time. And this provision will further increase if the deal has a hitch of any sort.

RBI has also asked banks that there may be some really bad situation in telecom. So they must provision more than necessary for those loans.
With Reliance Jio changing the dynamics here, there could be a real situation for existing players. Even Jio has over Rs. 100,000 cr. in debt. Vodafone and Idea are looking to merge. Airtel’s having to cut prices. The smaller players are struggling.
If loan provisions go up, banks will also increase the interest rates for such loans. If that happens, and revenues fall due to competition, telcos are even less likely to be able to service debt.
These excess provisions are not mandatory, though. So no bank will take them unless they have huge buffers. But you can expect that because banks won’t take it on their own, RBI will at a later point force it on them.

Side Note: Why Do Banks Do This?

Banks are a pampered lot. They can define what to take as NPA, and how much to provide for each loan. That changes their profits, so they can shape profits any which way they want. The regulators stop them going overboard, but they do get a lot of leeway.
A huge exposure – like Bhushan Steel (48,000 cr.+) or JP Associates (50,000 cr.+) will not easily become an NPA just because payments haven’t come for three months. JP associates was downgraded to Default rating way back in 2015. Yet, banks refused to call it an NPA because, perhaps, their loans somehow were being serviced. Banks can lend to a promoter owned company or subsidiary and that money can be used to just pay back the interest on a loan, so that the loan doesn’t qualify as an NPA. But the time for that too has passed.
Now the loan amounts are so large that if the banks took the hit, they would lose SO much capital that they might have to change operations substantially. A bank has a capital adequacy ratio (CAR) which is the bank’s capital divided by total loans. If you take a loss, your capital falls. So your CAR falls. And if CAR falls to below 10% you will be in trouble with BASEL guidelines and the RBI will then put additional restrictions on operations.
A refusal to accept an NPA is what RBI frowns upon now, because hiding the problem doesn’t mean the problem doesn’t exist.  So RBI is trying to ensure that disclosure is early and mandatory, and provisions are taken right.

In general, the banking index has run away and is scaling new highs just as:

The incongruence between the two is a matter of concern. Large private or public sector banks are likely to see tougher times ahead.