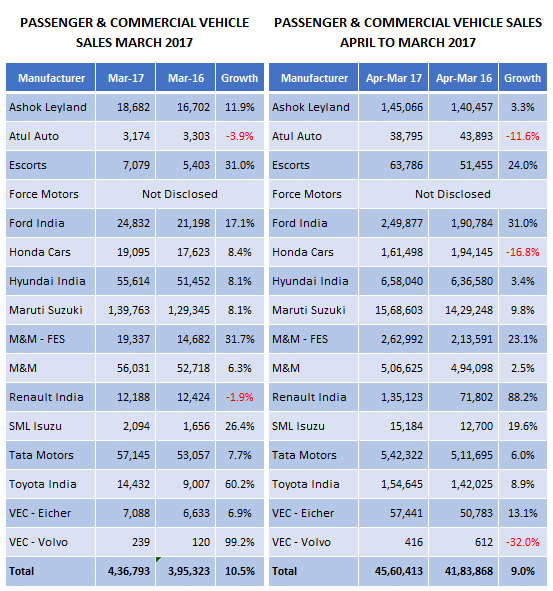 Sales of Passenger & Commercial Vehicles stood at 4.36 lakh units in March, 2017 against 3.95 lakh units during the same time last year resulting in a growth of 10.5%. 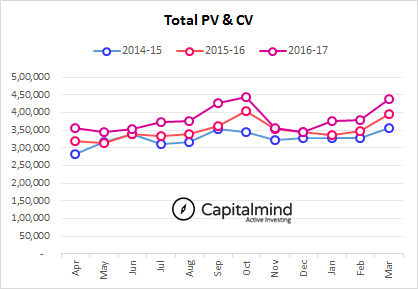 While most vehicle manufacturers hiked the prices of their products after the New Year, Ford has now decided to hike the prices of all its products by 2% from April. The hike has been attributed to partially offset rise in input costs.

We continued to delight Indian families with products that promise safety and compelling value for money. Furthermore, our efforts in addressing the cost of ownership perception and the promise of a differentiated and transparent experience helped us deliver above industry growth rate in the first quarter.

With a focus on newer and more contemporary models, Hyundai India has decided to phase out the i10 mini car. A company official confirmed that the model is no longer being produced. The new Santro will sport a different name and is being developed by Hyundai’s global R&D team in coordination with the India centre at Hyderabad meant only for India. 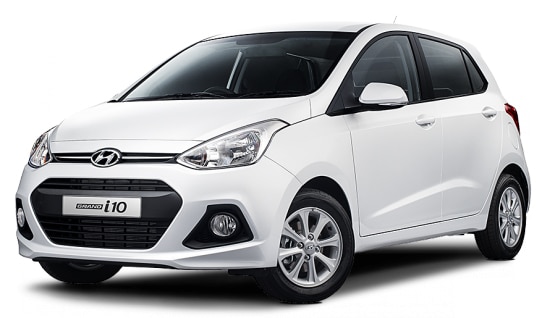 Hyundai has also decided to investment Rs. 5,000 crore by 2020. The investment is targeted towards new products, including new Santro and a compact SUV. Also as part of its new tailor-made package called `Prime’ the company will sell special versions of Grand i10 hatchback and Xcent entry sedan which would be Rs. 25,000-30,000 cheaper. While 2020 is a long time, the company is also focussing on a play in the hybrid vehicle segment. Hyundai Motor India (HMIL) Managing Director and CEO YK Koo confirmed the company’s plans of launching Ioniq hybrid in 2018 during the Auto Expo. The The Ioniq will be imported as completely knocked-down unit and assembled in India.
Hyundai reported sales of 55,614 units in March, 2017 against 51,452 units during the same time last year resulting in a growth of 8.1%. 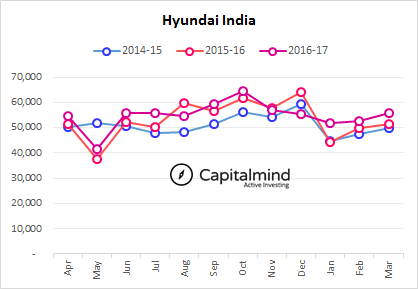 The company was able to close the financial year with highest-ever sales creating a strong momentum for the next year.

The company’s popular models Grand i10, Elite i20 and Creta achieved a record sales of over 10,000 units each in a single month in March.

Honda launched the all-new Sporty Lifestyle Vehicle WR-V [Honda WR-V stands for ‘Winsome Runabout Vehicle’] during the month based on the Jazz platform. It is also the first model developed in collaboration with Honda R&D, Japan team. The Honda WR-V is offered in two grades S and VX in both Petrol and Diesel variants.
The model will compete directly with Ford EcoSport and Maruti Suzuki Brezza.
https://www.youtube.com/watch?v=8BVfBHy0iHI
Speaking on the occasion, Mr. Noriaki Abe, Chief Operating Officer, Regional Operations (Asia & Oceania), Honda Motor Co., Ltd. said:
The WR-V is an all-new premium model in the Honda family and features the brand’s global DNA. Based on Honda’s most successful platform world-wide, WR-V has the best of Honda technology and design. India is the first country to manufacture and launch the Honda WR-V in the world which is testimony to Honda Motor Company’s commitment to the Indian market.
Speaking at the launch, Mr. Yoichiro Ueno, President and CEO, Honda Cars India Ltd. said:

The fast-evolving Indian market has shown strong demand for compact vehicles that are stylish, comfortable and have premium features. With the launch of the Honda WR-V, we would like to provide joy for recreational usage and comfortable driving for daily use in the city for customers in India. We are confident that WR-V will help us to fortify our premium image in all segments.

Since the launch of the product, Honda has confirmed to have received 2,500 bookings within a week of launch with the demand for the diesel variant being much higher than the petrol derivative. 2 weeks into the launch, the bookings have crossed 4,500 already.
While a few medial reports have confirmed that Honda will be exporting the new W-RV to Brazil, the company has turned down all such claims. Honda’s Senior Vice-President (Marketing and Sales) Janeshwar Sen mentioned that the company has its own R&D team in South America which is developing its own variant, the company has no plans to export the new W-RV to any other country.
Honda has also proposed a price hike on its models [Honda Brio, Honda Jazz, Honda Amaze, Honda WR-V, Honda City, Honda BR-V, Honda CR-V and Honda Accord Hybrid] by up to Rs 10,000 effective April 2017 although the price of the newly launched Honda WR-V will remain unchanged. The hike has been attributed to the increase in freight charges and input costs.
Honda is also developing a brand new global car platform which would lead to a new premium compact car, a sedan, and an SUV.  Here is what Noriake Abe, Honda’s Chief Operating Officer for the Asia & Oceania region said:
It may take at least three-to-four years for the new platform to develop. India will play a key role in development of the new platform, along with teams in Thailand, Brazil, and headquarters Japan.
Honda India President and CEO Yoichiro Ueno described the current condition of the company as:

We had a big slipped disc a few years ago and this year is our hospital period. The biggest problem was our inventory. I came in April and the inventory level was extremely high. Also, it was slow moving so it was extremely difficult for us to clear that. Our sales efficiency was down. And people had already shifted to petrol. So we offered discounts on diesel but it was still not easy to move the inventory.

Currently the inventory levels look healthy. We are making a lot of changes in our marketing activities and we are now developing a lot of retail tools for enhancing dealer operations. These activities will eventually improve the efficiency of the dealers. The company is also planning to bring its higher end SUV called HR-V soon to Indian shores.

Honda used to sell Civic and Accord in India but now we only have Accord Hybrid here. Our traditional customers want a replacement and those cars are a part of our future line-up candidates. The Civic segment is only about 15,000. But, if we see the price range, there are some SUVs and MPVs in that segment. Customers in India can switch the segment easily. The volume in that segment is much higher and as the GDP increases, the volume will also increase.

In order to achieve premium-ness in that segment (WR-V) it is important to have the equipment that are best in the segment. So we are trying to modify our specifications. In WR-V, we’ve completely eliminated the base segment and launched only quite fully equipped models.

This fiscal ending March, the growth will in the negative territory. This is due to the fact that the market has shifted to petrol and we had a lot of diesel inventories. This has to be corrected. Due to demonetisation in November, we had a bit tough phase. But the next fiscal, we expect a stable economic growth and we had started to see recovery from January.

Another cause of being optimistic is the fall in interest rates will help boost sales. Our two plants at Greater Noida in UP and Tapukara in Rajasthan was having a combined capacity of 2.4 lakh units per annum. So there is no immediate need to set up the third plant. This is for future plans. As we enter into the new fiscal year, we are confident of a strong show in 2017-18 with a robust product-portfolio and good demand from the market.

Renault launched the KWID climber – one of the two concept cars revealed at the auto expo last year [the more adventurous Climber and the sportier Racer].
Toned down from the original concept, the Climber has been launched as a special edition with a 1.0-litre Kwid engine. This is the third variant of the Kwid 1.0 and is about Rs 25,000 more expensive than its standard sibling in both manual and AMT versions.
The launch has been part of Renault’s strategy of launching one new variant of Kwid every 6 months. 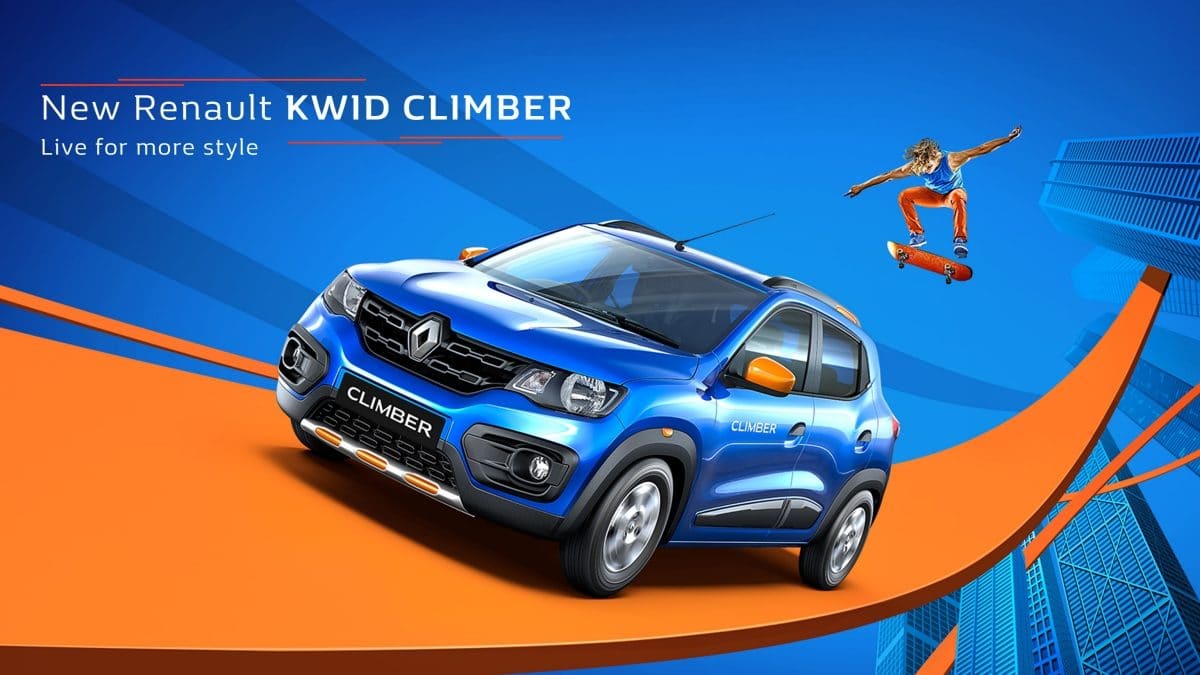 Renault Kwid is a great success, revolutionising the compact hatchback segment in India. At Renault, we are committed to our core specialty of ‘concept innovation’, with the endeavour of redefining a segment, offering new and innovative products to customers.

The Renault Kwid CLIMBER has been developed keeping in mind specific customer needs and caters to diverse audiences, becoming the perfect offering for young achievers who are moving up places steadfastly. This new launch reflects our intent to keep pace with global innovations and at the same time make products to suit the local needs.

Renault also plans to expand its dealership to 320 by the end of the year from the current 270 dealerships. Sumit Sawhney, Chief Executive Officer, and Managing Director, Renault India Operations also confirmed that the company will also add 50 outlets for its pre-owned (used-cars business) cars outlets — Renault Selection from the current 20.

We are in full network expansion mode. We are getting full advantage — somewhere while we are growing — we are also catching the depth. For instance, in Delhi, we have 11 outlets and probably by end of next three months, we will have 15 and by end of the year, 18 (dealer outlets).

After-sales is a key business and our dealers are happy because it gives additional revenue to them. This will have good advantage because the future products that we will be launching years ahead of time, our existing customers may look for selling back to our used car outlets. 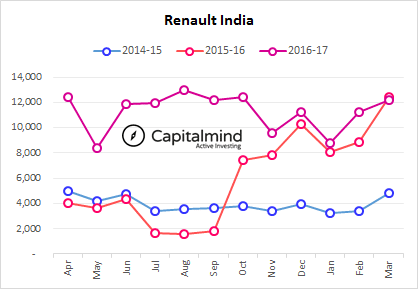 Get ready to arrive in style with the ultimate showstopper. Presenting the new Renault #KwidCLIMBER. Know more here: https://t.co/DLYCKa1FIX pic.twitter.com/s9PD62ttd3 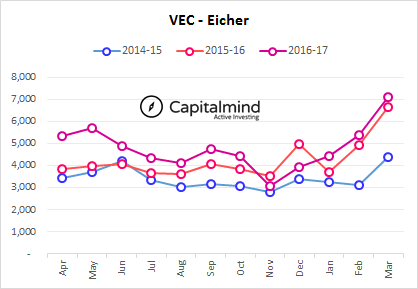 Here is how the sales stood between Eicher and Volvo for the year across the segments. 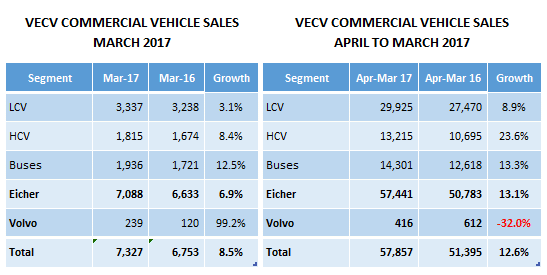