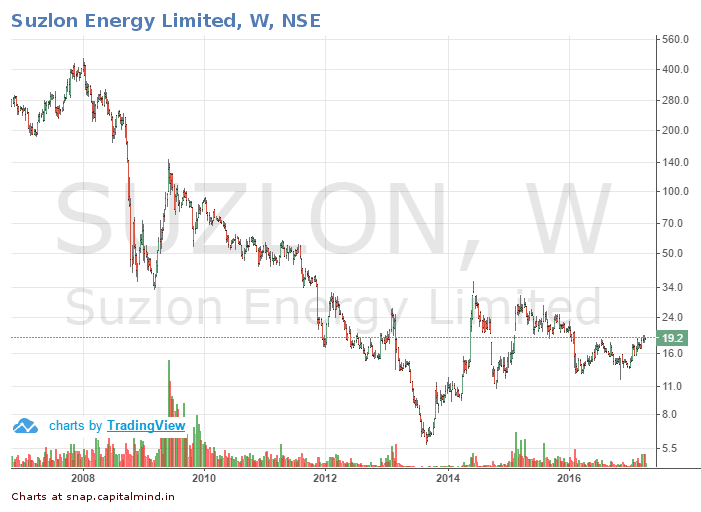 We come across a large number of interesting stocks in Capitalmind SNAP Outliers, our discovery tool for stocks with momentum. See a video of how Outliers works, and how to use Outliers to find all-time highs. Here’s a stock we found interesting that’s been an outlier.
A company whose share price has fallen 96% from the peak is generally written off. The company’s stock price is a barometer of the health of the company and being down 96% from the peak, there is a question hanging about the very survivability of the company. Suzlon was one of them.
Even good stocks can take a steep dive when valuations reach a crazy level and the market corrects the imbalance. In 2000, Infosys like most other firms of the Infotech Industry were trading at insane valuations. When the bubble burst, every stock fell hard and even Infy got dragged down 85% from its peak. In fact, adjusted for bonus / splits, Infosys got back to its 2000 high only in late 2006. Wipro hasn’t even done it yet.
Suzlon, the stock under consideration did not get such high valuations. The wind-turbine company for a long time showcased steady growth even as the advantages that propelled the company initially such as 100% accelerated depreciation were slowly reduced.
What nearly killed the company though was its Acquisition of the European REPower (later renamed as Senvion). The acquisition was based on Debt, and a lot of debt. However, wind power orders cracking post the financial crisis of 2008, and the future of the enterprise came under question.
Biting off more than one can chew is an acronym used in cases such as this or the Tata Steel takeover of Corus. With booming equity markets, raising debt wasn’t tough but when the tide went down, companies that had gone down the acquisition road buying up companies that were way larger than the parent company found the going tough.
What hurt Suzlon even more was the total removal of accelerated depreciation in 2012. The idea of accelerated depreciation for Suzlon was a major tax loophole: you could buy into a wind-power project for, say, Rs. 1 cr. and get a tax-loss of Rs. 1.5 cr. (150% depreciation) on the first year. This allows you to offset other business gains or capital gains. And then, since the project exists and generates cash, you continue to make money on the capital (and can sell your stake later). This is usually done to excite investment into a new sector, and having seen a lot of wind power projects, that tax benefit was removed in 2012,
Without that advantage, sales took a hit and this got reflected in numbers with Suzlon ending the year 2013 with an Operating Loss.
What saved Suzlon was maybe the fact that the acquisition of REPower while expensive was still a valuable asset and one which could be sold at some point of time. Suzlon was also not the only company to take such massive hits with most of the major wind turbine manufacturers too reeling in debt.
After dipping into losses in March 2010, Suzlon finally managed to get back in the green in the year ending March 2016.

There has been three big moves which has helped the company get back to profitability and while its still a long path ahead, the probability of bankruptcy is pretty limited. So, what were the changes that undid this?

The company had to let go of a company that in the nine-month period ending December 31, 2014 contributed as much as 73.5 percent to Suzlon’s consolidated revenues . In other words, Suzlon decided to cut the loss and sell of the Crown Jewel.

Renewable Energy is all the rage once again with there being fresh impetus on boosting production using Solar and Wind. While Suzlon is not the market leader, it has a 26% market share among turbine manufacturers in India trailing Siemens Gamesa by a small margin.
India has set a target of 175 Gigawatt by 2022 of which 60 GW would come from wind. Suzlon being the second largest company is bound to benefit if we took the government’s promise to be bonafide and one that is achievable.
Suzlon also has a solar power story now, and implements solar power projects as well.
While Suzlon theoretically broke back into the end of the financial year 2016, it managed to do so thanks to the sale of RE Power. But it’s only in the quarter ending September 2016 that the company has truly been able to come back to Net Profit.
The turnaround has come at some cost. Equity capital is now 182% higher than what it was in 2012. What this means is that the company will have to earn a lot more on an earnings per share basis.
The risks: That crude prices will fall and make wind power less attractive or cheaper. Already, prices for wind and solar power projects in terms of prices per unit offered to the electricity companies are at such lows that margins are dropping (for new projects). This could pose a future risk in terms of growth, all over the world. Also, Suzlon still has a lot of debt and a rise in interest rates will hurt it when it refinances.
The stock currently trades at 34 times its earnings, but earnings in a stable period might still be Rs. 2 to Rs. 2.5 per share. At a price of 19, that’s not an unreasonably high valuation. The stock hit its first 52 week high since 2014 in the run up to the Election but cooled off and even today trades at price lower than what we saw in June 2014.
Here’s a chart of the stock, in a log-chart. The price fall from 400 to 19 might not be replaced but at least we are seeing the stock show signs of an upmove.

With problems seemingly taken care off, the stock is once again hitting new 52 week highs.  Is this a good time to enter? Companies that mess up big time barely get second chances. Suzlon has got that chance and from the make of things, it isn’t doing anything wrong for now. If the winds shift once again, in its favor, the stock price should improve though we may never see its all-time high being tested for years to come.