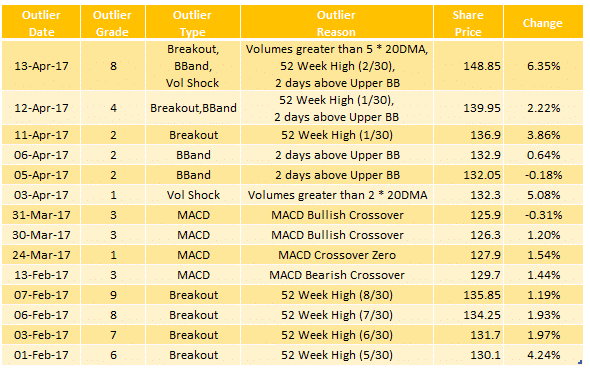 We come across a large number of interesting stocks in Capitalmind SNAP Outliers, our discovery tool for stocks with momentum. See a video of how Outliers works, and how to use Outliers to find all-time highs. Here’s a stock we found interesting that’s been an outlier. Catch them all here.
Today we take a look at Sterlite Technologies [STRTECH]
Headed by Anil Agarwal, STRTECH is a Telecom Solution Provider with wings spread across the globe coupled with manufacturing presence in China [optical fiber capacity of nearly 27 million fiber kilometres on an annualized run rate] and Brazil. STRTECH is engaged with key customers across Europe and partners global telecom operators in the Middle East, Latin America as well as Asian markets and European markets.

With unprecedented opportunities surfacing in telecom industry, STRTECH demerged the power products and transmission business into a separate company called Sterlite Power Transmission last year. This helps STRTECH narrow its focus on the telecom space which is witnessing operator consolidations and spectrum wars.
With the government’s Digital India program [STRTECH is working on the Smart Cities projects in Ahmedabad. , Gandhinagar and Jaipur. Some of the projects include 10,000 km long fibre-based communication network intrusion-proof smarter data network for the Armed Forces, rural broadband for BharatNet, Smart Cities’ development, and establishing high-speed Fibre-to-the-Home (FTTH) networks] playing a major part in the future of the company.
Adding more muscle power to its presence in the telecom industry, ST acquired a telecom software product company – Elitecore Technologies  to increase its offerings to global customers in the form of software solutions for operations support, business support and revenue management.
The stock as can be observed in the table below has been popping up in our Outliers table for quite some time and is currently trading at near its all time high.

With the demerger having taken place, we look at the financials of the pure play telecom entity for last year alone coupled with information available as of April, 2017. 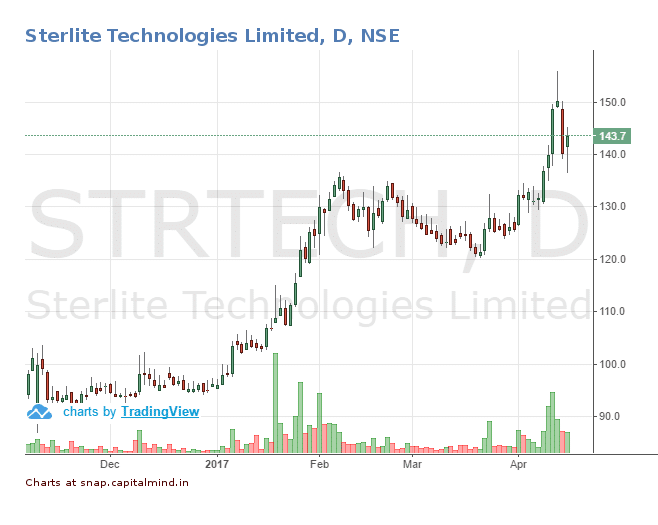 Connectivity, Content and Low Cost Smart Devices – are the three fundamental drivers that the company states are crucial for its growth.