Coming to the company’s rescue, Bajaj Dominar looks to close the gap in the 350cc motorcycle segment. Media reports suggest that Bajaj has sold a little over 3,082 units of the 373cc motorcycle in February against RE’s 2,628 units sold [Res sales fell 35% in February] in the same segment.
Dominar customer form close to 20% of the customer base for Bajaj currently and has a run rate of close to 3,000 units in the past 3 months and Bajaj expects this to grow further as the company expands the model’s presence from 22 to 32 towns which is expected to go to 110 towns by the end of March.
Eric Vas, President (Motorcycle Business), Bajaj Auto said:

The Dominar is an important product for us. It has emerged as a leader in the 350-cc-plus motorcycle segment within three months of launch, despite being available only in 30-odd towns. The company seeks to expand its reach to 200 towns by the end of April and is ramping up production to attain monthly sales of 10,000 units by September.

Dominar 400 buyers are largely in the age group of 25 years who have already owned a bike .There are no first time users yet but this is expected to begin happening once the network grows and more customers start going in for the relatively less expensive disc brake version which has a price tag of nearly ₹1.4 lakh.

On the migration to BS-IV vehicles, Bajaj confirmed inventory of 79,000 BS-III motorcycles and almost 1,700 units of BS-III three-wheelers valued at Rs. 500 crore. Though the company has been demanding sales of BS-III units not be allowed from 1st April, which did not stop the company from manufacturing a few thousand BS-III motorcycles in February [as per the report submitted to Supreme Court]. 5,100 units of BS-III Pulsars (motorcycles) were produced in February to liquidate ‘high value components’, lying with the company and its vendors.
Bajaj also brought an end to its partnership with Kawasaki. Here is what the company said:

Under the tie-up with Kawasaki for sales and service of Kawasaki motorcycles in India, which commenced in 2009, Kawasaki bikes in the range of 250cc to 650cc were sourced from Kawasaki and sold in India. Being in the high priced segment, the sales have not been significant for many years now. Sales through this tie –up in 2015-16 was 867 units and for 2016-17 up to February, 2017 was 642 units. Thus the closure of this tie-up does not have any impact whatsoever on the overall performance of the company nor do we anticipate this to have any impact on the stock price of the company.

Going forward from April, Kawasaki motorcycles will be sold by India Kawasaki Motors a 100% subsidiary of Kawasaki Heavy Industries Japan — through its dealer network. 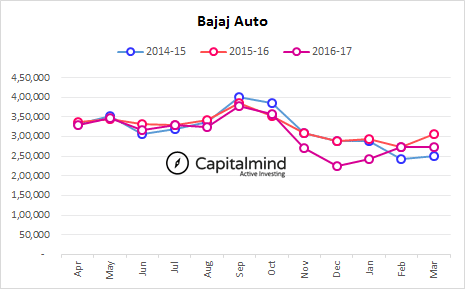 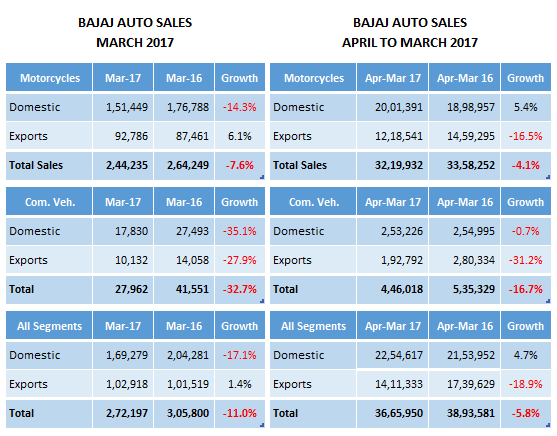