Taking a leaf out of HDFC’s master plan of merging its insurance business with Max India to create the largest listed insurance company, Vodafone will now merge with Idea Cellular. However, while HDFC and Max were not a one-one competitor, Vodafone idea merger is like that of a movie scene – Mere Dushman ka Dushman mera Dost – Dushman being Reliance Jio this time.
The rumours crept up in August 2016 when Idea clarified that the news flashed on CNBC TV18 about Idea and Vodafone merging as absolutely untrue and preposterous.
India is the second largest telecom market in the world with a reported subscriber base of 1.03 Bn as of March 2016 [adding 63.7 Mn subscribers in 2015-16]. The net subscriber addition in India for the first time surpassed that of the world’s largest wireless market – China just last year.
Vodafone and Idea Cellular merger will create one big Goliath with close to 400 million subscribers, 35% market share and a market value of $23 billion.
Why does this come now? In 2016, Reliance Industries Chairman Mukesh Ambani decided to flood the market with its free high speed data and voice calls with it’s Jio offering [rumored to have spent $20 billion]. This cash burning exercise meant a quick addition of 70 million subscribers to Jio.

This merger brings some cheer to the parent company Vodafone UK – as this would now give the company an opportunity to sell out of India if needed rather than be holding on a to a private subsidiary.
The merger will create India’s largest telecommunications company would be equally controlled between the Aditya Birla Group and Vodafone Group.

How does the merger run through?

Idea will issue fresh shares to Vodafone, diluting everyone by 100%. Vodafone gets 50% shareholding in the merged entity. Which will come down”
Vodafone would own 50% in the merged entity while the Aditya Birla Group will hold 21.1%. Aditya Birla will buy 4.9% from Vodafone for Rs. 3,900 crore in cash [Rs. 108/- per share] so as to increase the its share in the new entity to 26%. (Vodafone will own 45.1%)
Sometime in the future, Aditya Birla Group will have the right to acquire up to 9.5% additional shareholding [at Rs. 130/- per share] from Vodafone Group so as to equalize its stake with Vodafone’s.
If this does not happen within 4 years from the completion of the merger [which is expected by 2018 end], Vodafone must sell its shares over the subsequent five years to reduce its holding and equalize with the Birla holding.
This is how the entities look prior to the merger: 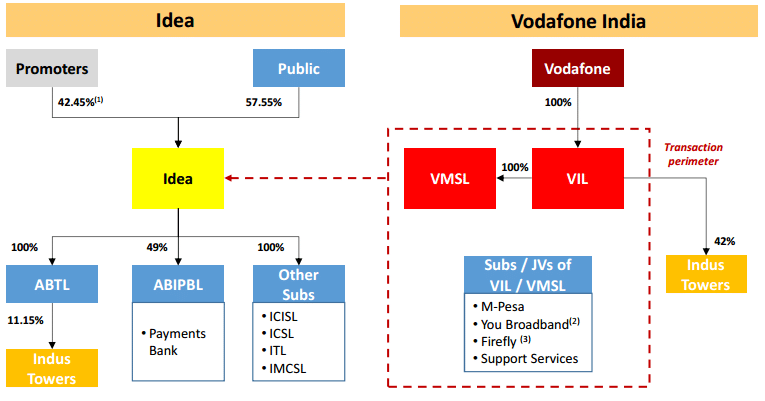 Vodafone India (VIL) and Vodafone Mobile Services (VMSL) will be merged with Idea Cellular leaving out VIL’s [42%] stake in Indus Towers.
On Idea’s front, Idea Cellular will need to monetize the captive towers including Idea Cellular Infrastructure Services – a tower Company owning towers [9,744 towers as on March 31, 2016] in Bihar and Odisha service areas. And also the 11.15% stake in Indus Towers [a joint venture with the Bharti Group and Vodafone Group providing passive infrastructure services in 15 service areas – 119,881 towers].
This is how the new entity looks: 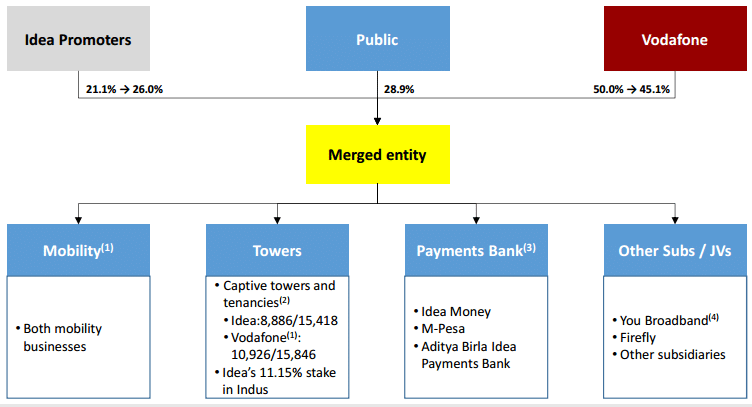 How will this play out in the Boardroom?

Idea Promoters and Vodafone Group will be joint promoters of the combined entity with equal affirmative rights to both promoters on key matters.
While Idea’s current Chairman Kumar Mangalam Birla will be appointed as the Chairman of the new company, the 12 member board will consist of 6 independent directors with equal representation from Aditya Birla Group and Vodafone Group.

What is Goliaths new size?

How does this play out financially?

Aditya Birla Group will pay Rs. 3,900 crore for the acquisition of a 4.9% stake in the new entity thereby valuing the new entity at a valuation of Rs. 80,000 crore.
The enterprise value considered for the merger is Rs. 82,800 crore for Vodafone India and Rs. 72,200 crore for Idea excluding the Indus Towers stake.
The merger ratio will be based on Idea’s share price at Rs. 72.5/- per share (excluding the Indus Towers stake of 11.5%). Before the completion of this merger, Vodafone and Idea will sell their standalone tower assets and Idea’s stake in Indus Towers to reduce the leverage of the combined entity with Vodafone as well exploring a partial or full disposal of its 42% stake in Indus Towers. Effectively, Vodafone will put about 55,200 cr. of debt into this entity. And there’s already 52,500 cr. in Idea’s debt. That will together add up to a whopping 107,700 cr. of debt in the merged entity.
To bring this down, Idea-Vodafone will sell the 11.5% in Indus towers that they own, and also attempt to sell their standalone towers business.
That means there will be a lower contribution to growth from the Tower businesses (or in fact, no contribution at all) and nearly all of the future revenues will be in the mobile business.

Our View: Just Bigger For a Jio Kill

This creates a large entity but the space is dominated by Airtel and potentially, Reliance Jio. The smaller player in RCOM will likely have to be merged with one of the above, leaving a three player field in Indian telecom.
With the kind of investment required for moving things along in the telecom business, the future will remain difficult for all players in terms of revenue growth. As competition heats up, prices are likely to remain very low. And if prices are low, then the whole market has to grow. The Indian market is reasonably well penetrated – with over 112 crore mobile subscribers. (88% penetration in terms of population) With limited scope for market growth, companies can try to only wrestle away market share from each other or raise prices. With Jio as a new entrant, with better technology, and a better debt profile, prices won’t go up – and market share will change.
The Idea-vodafone merger ensures, for the most part, that both players survive together where they might have floundered individually. But they will need a lot more investment to ensure that the combined entity beats the competition.
There’s some confusion about how Vodafone valued Idea – which was at Rs. 72 per share excluding its stake in Indus Towers. However the transaction of Vodafone buying the 4.9% stake from Birla is done at a market valuation of about Rs. 80,000 cr, which would value the combined entity at Rs. 110 per share. The company’s share price has now fallen to about Rs. 92 per share, an 18% fall since the deal announcement.
We don’t like this sector. When everyone’s out there trying to kill each other, there’s only destruction to deal with. At some point, if ARPUs begin to rise, or if alternatives like Mobile Banking become prevalent, this sector will look attractive. But till then, the best thing about the telecom sector involves being a customer, not a shareholder.
Disclosure: No positions and no recommendations.