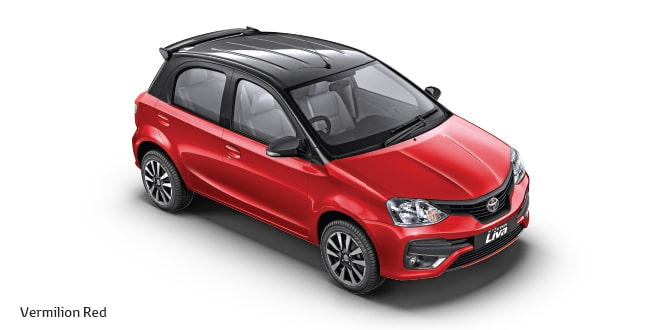 Toyota kicked off February with the inauguration of its 303rd new dealership in Muzaffarpur, Bihar. With the opening of this new dealership, Toyota Kirloskar Motor holds 360+ customer touch points across 230+ cities in the country.
With the EPCA ban on Euro III vehicles from April 1, 2017, TKM confirmed that the company has stopped manufacturing BS III vehicles and all vehicles currently being sold in India are BS IV compliant. The company is also in the process of introducing BS VI fuel complaint vehicles as soon as the required fuel is made available across the country. All manufacturers will be forced to sell their BS III inventory within the next month to adhere to the April 1 deadline.
Having successfully recovered some market share after the Diesel Vehicle ban with the facelift of Innova Chrysta and Fortuner, TKM now looks to recover some market share in the lower end of the passenger vehicle market as it launched the New Dual Tone Toyota Etios Liva. The new Liva comes with a redesigned roof Spoiler, dual-tone painted contrast roof and pillars and a lot more. This new model will take on Maruti Swift and the Hyundai Grand i10.

Toyota Kirloskar India reported sales of 12,113 units in February, 2017 against 11,215 units during the same time last year resulting in a growth of 8%. 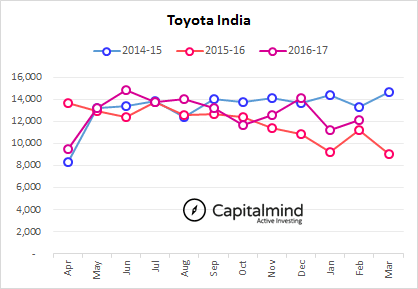 We clocked a 12% growth in sales in February 2017 when compared to the sales in the corresponding month last year. Both the new Fortuner & Innova Crysta have been performing consistently, attributing to TKM’s domestic growth. The Fortuner which captures more than 70% segment share in the SUV segment, has sold 2027 units in February making it the highest ever sales for Fortuner in a month ever since its launch in India in 2009. The new Fortuner has sold over 8200 units in the last four months. The Innova Crysta has also maintained its growth trajectory selling over 67,500 units since its launch last year. We are very happy with the way our customers have appreciated both the new Fortuner and the Innova Crysta.

We launched the new Prius and the new Camry Hybrid last month. The Camry hybrid which is the first and the only strong hybrid to be manufactured in India, has always been very well received by our customers and we are confident that our customers will appreciate the new Camry Hybrid as well. We are actively working to promote strong hybrid technology and other environment friendly vehicles based on our stance that environment friendly vehicles can have a positive impact on the environment only if they are used widely.