The bond market cries: Short Squeeze! Of course, we equity players know that short squeezes are different and massive. This one wasn’t huge, but it’s still interesting to read into what’s happened.

First, the Dynamics of the Bond Markets

Bonds are not as easy as stocks. For one there are multiple markets. For another, there are strange clearing mechanisms and barriers to entry for different players.
There is a market called the NDS-OM, where players can buy and sell bonds. This is an institutional market (though you and I can participate as customers) but there’s one thing: Only banks and primary dealers can go “short” on bonds – that is, sell them before owning them, hoping to buy back later at a lower price.
How is this done? The other side of the “short” is the buyer, and he needs to see the bonds. Settlement is every day. So how does the market get settled, if one player sells short and doesn’t own the bonds?
Enter the CROMS or the Clearcorp Repo market. A bank can do a “repurchase” transaction (repo) saying: Give me cash, take this security as collateral, and I will pay you, say 5% interest rate on the cash for one day. Mutual funds and other institutions too can use this market for short term liquidity.
The other side is another bank that says give me this security and take cash. CROMS allows either a “Basket” of securities (TBills, G-Secs) or there is special repos for each security. (Note: Mutual funds and insurers are NOT allowed to do this – only banks can take securities and offer cash. More on this later)
Now a bank A that goes “short” a bond (say the 7.59% 10 year bond) will go borrow the bond and give cash in the special repo in CROMS. A short in the NDS-OM market will offset a similar long (borrow) of a particular security in CROMS and they are cleared together, so there is no default. Of course the repo will unwind the next day, so the shorting bank has to keep borrowing the security every day (daily rollover through a fresh repo buy).
Then, there is CBLO, where you borrow or lend cash, and the borrower has to put a security as collateral. The collateral goes to CCIL, so the lender of cash doesn’t see the security transferred to him, even overnight. (Unlike repo)

Ok, So What? Here’s what just happened:

There’s been a short squeeze of sorts. Some banks (mostly foreign, apparently) have been shorting the 7.59% and 6.97% 2026 bonds (the de-facto 10 year bonds and the most liquid of the lot). The view is that yields will rise because hey the RBI is so hawkish on rates and inflation. Yields rose all the way to nearly 7% (from 6.4%) which is a hefty fall on the bonds – note that bond prices move inversely with yields.
Public sector banks have huge amounts of money they haven’t been able to lend, so they just bought government bonds. They are full with government bonds, with more than 30% of their deposits sitting in G-Secs. These G-Secs have fallen in value. And that hurts the banks – who are sitting on losses of about 2% to 5% on their bond holdings. Our estimates are that this results in a hit of around 25,000 cr. to the banking system profits.
Banks, an anonymous source tells us, didn’t want to lose this kind of money, which they believed was to be blamed on the foreign banks that were shorting those 10 year bonds.
So they decided to squeeze the shorts.
A short position needs a borrow from CROMs. Someone has to give them the security in CROMs against their cash. You put a bid saying, here, take my cash at 3% (ultra-low rate) because I want this security (the 7.59% 2026 bond, for instance). You hope that someone will say – wow, I get this much cash so cheap, so let me give the security. Remember, another bank can give this security, take the cash at 3% and give to RBI overnight for around 5.75% and earn that spread.
But suddenly, there was no availability of this security. Even at an interest rate close to 0%! Meaning, some banks refused to take cash at 0% overnight and produce this security in exchange. (There were trades in other securities – even at 5% rates – which means the banks were colluding to deny only this security. Actually, two securities – the 7.59% and 6.97% 2026 bonds)
This became a huge problem, because if even at low rates banks aren’t giving securities and taking cash, then the borrower is stuck – he needs the security to deliver against the short position in NDS-OM. What can he do?
CBLO doesn’t help – he gets no securities. Reverse Repo with RBI might not help, as RBI may not give you the exact securities you need (RBI just needs to give securities)
The short positions had to be squared off, and that means they would buy back what they had short sold. More buying means the price of the security would go up (and yields would fall). See what happened: 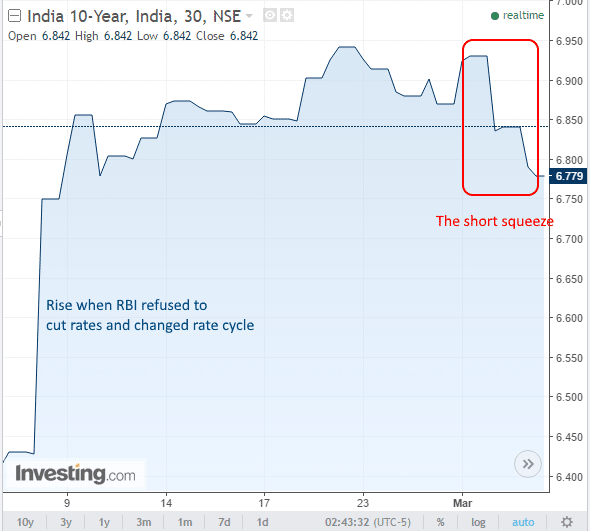 Yields by about 0.2% or 20 basis points. That’s a near 2%-3% rise in the bond price. This sounds piddly to you if you are an equity market person, but a 2% rise in bond prices are huge for a bond player.
The squeeze is still on. As of now, the market in CROMS still shows you sub-2% rates in the CROMS market for these bonds while everything else is at 5% or more.

It’s quite likely that PSU banks are themselves borrowing all the securities out there, just so that there is no supply given to the “short” players.

Foreign banks are saying this is market manipulation, blah blah. This is hogwash. There is no requirement for any bank to be forced to lend its securities. Call me stupid, I refuse to take this opportunity to get cheap cash. What are you going to do, force me to make a profit?
PSU banks might have done this in a coordinated fashion which is the only real reason to believe something is shady here. (You can do what you want by yourself but if you manipulate markets by colluding with others, that becomes illegal as exchanges don’t allow it) However the RBI is the regulator here – and we think this should have been SEBI instead, because we need a securities market regulator. RBI isn’t likely to censure PSU banks easily – and in fact might even applaud PSU banks for winning over the sophisticated foreign banks.

What Can Be Done To Fix Short Squeezes?

You have to increase availability. Banks aren’t willing to lend those 2026 bonds. So what? Why not allow other players to lend this security instead?
Mutual funds, for one aren’t allowed to lend their securities in CROMS. Because, technically, if an MF has the 2026 bond, it can lend it out, get cash and buy a different bond. Now, with the same cash, it has TWO bonds, which is effectively leverage and MFs are not allowed to leverage.
Same with insurance companies.
Why not change this?  MFs and Insurers should be allowed lend the security, take the cash, and place cash only in overnight trades (like CBLO). Then there is no risk of leverage, since the cash investment tenure (overnight) matches the CROMS repo (overnight). Then, a mutual fund can give the 2026 bond, take say Rs. 100 crores at 1%, and put it overnight in CBLO at 5.5% and earn the spread.
The other option is for the RBI to issue more 2026 bonds for the government, replacing or buying back certain existing bonds (like the longer term bonds which were issued at 8%+ earlier) and effectively reduce the interest rates paid by the government. Remember India’s government’s largest expense is: interest payments. Any reduction should be welcome.

Typical short squeezes are intended to kill the player on the other side (who is short). This happens often in equities but the moves are much bigger. A short squeeze in Akruti in 2009 took the stock from 800 to 2000!
This time, in bonds, the foreign banks are too strong and will find a solution. If they can’t short the bonds now, they’ll cover and come back later. The forces driving bond prices down (and yields up) are fundamental: RBI signalled the end of the rate cut cycle for one. For another, as more people draw cash, banks sell the bonds they bought with the deposits that came in (from demonetization) and that puts more pressure on bond prices.
You can’t fight fundamental moves forever, and eventually bond prices will adjust. But this squeeze offers you an opportunity to exit any gilt funds you may still be holding, as prices have risen somewhat. We should suggest only staying in shorter term bonds (or bond funds) instead.
The big beneficiary? NSE Bond Futures. Current data shows that bond futures have seen trading volumes go from an average 800 cr. per day to nearly Rs. 3,000 cr. per day. The “short” banks have used the bond futures to go long the 2026 bonds to hedge themselves in the short squeeze.
There is potentially some action that RBI might take to ease the pressure, but we expect that this pull-and-push action will continue till March 31, which is when banks want lower yields (Banks mark-to-market securities on the last day of the quarter, for their financial results).
Foreign banks – the “short” positions – might simply make deals with mutual funds that own such securities, and ensure they continue their positions, or go long on bond futures instead. Unless there is a reason for yields to fall, fundamentally, the bond market will see yields go back up in the medium term.