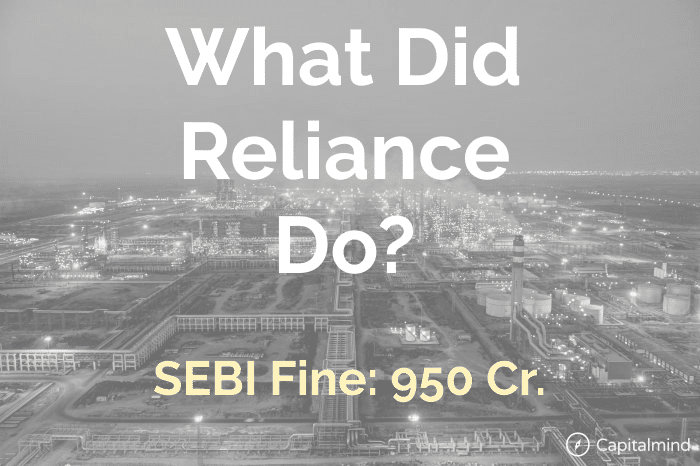 Reliance Industries was fined Rs. 950 cr. (around 447 cr. in retracted gains, and 500 cr. in interest) for a 2007 case of manipulation of Reliance Petroleum Limited (RPL) shares. What you’ll read now is: What the heck actually happened? Reliance owned 75% of RPL, and Chevron owned about 5%. Reliance had stated in March 2007 that it would sell some of its stake in RPL, and they decided that November was the time.
Also read: We had noticed RPL was oversubscribed in the IPO in April 2006 – and said the market was just too hot.

The SEBI Order: How Reliance Sold These Shares

The SEBI judgement has excellent details on how Reliance proceeded. Here’s a quick look, and then we’ll explain. 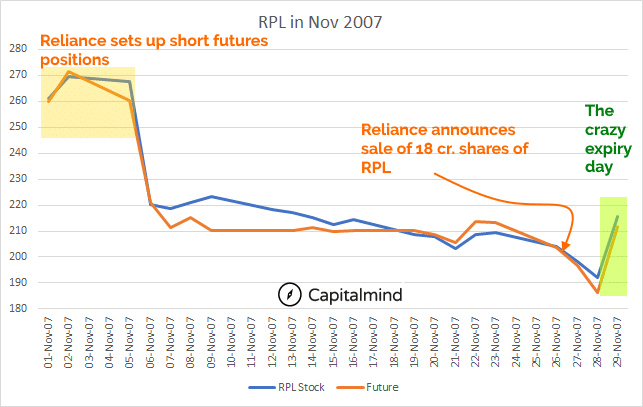 RPL shares were to be sold in November. They wanted to sell 22.5 cr. worth shares. But at prices of 250+ and very little floating stock, there was a very good chance that RPL prices would fall like crazy. So Reliance decided it would short-sell RPL futures to hedge against the price fall. When it sold stock, the price of the share would fall. So would the future, and the lower realization in the stock sale would be offset by the profit realized in the futures.
But there was a problem.

Any single entity could only be short about 1.01 cr. shares of RPL. The position limits specified that any one entity could only have positions of 1% of the free float which meant Reliance couldn’t hedge the 22.5 cr. shares they intended to sell.
So they did this: They contracted with 12 other entities to set up short futures on RPL.
Who promptly short sold a huge chunk of RPL shares. Within 5 days, they had short sold nearly 10 cr. of RPL shares. And then, the stock went into the F&O ban period. Apart from individual limits, there’s a limit on how many positions can even exist in derivatives – when you hit that, no fresh futures positions can be taken, only existing ones can be squared off.
The problem here: Reliance had 63% of all the positions when this limit was hit. One entity controlled 63% of all the short interest on Reliance, and that’s what SEBI rules on position limits are intended to stop. This violation is one reason SEBI is miffed.

The Other Part: It’s Not A Hedge

Reliance defended itself saying look this was a hedge. SEBI said it’s not. Why? Position limits didn’t allow Reliance to take the hedge completely to defend their position initially. Meaning they could hedge much lesser shares (10 cr.) than they intended to sell (22.5 cr.).
Then, they sold RPL shares. By 23 November, they had sold 18 cr. shares of RPL. The price had fallen to around Rs. 210 by then, a fall of 20% from the close on 2 Nov.
But they didn’t take off the hedge correspondingly. After 16 November, they had many more shares in the hedge (short futures) than they had left to sell. 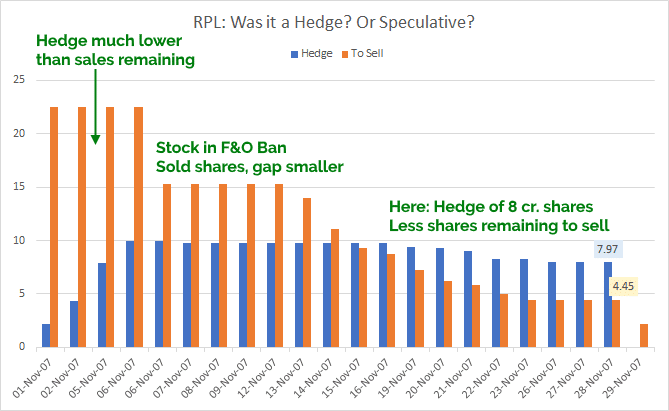 Having a hedge greater than you intended to sell means you were “net-short”. In this case, it meant Reliance didn’t have so many shares left to sell (only 4.45 cr.) but it had a much higher hedge (nearly 8 cr. shares) left.
That means this: If Reliance sold all the remaining shares, the profit it would make on the short-futures trade (8 cr. futures short) would be much more than they lost on the selling of shares (only 4.45 cr shares to sell).
SEBI calls this speculative, and manipulative.
Because of what happens next.

On 26 November, Reliance made an announcement saying they had sold 18 cr. shares of RPL for Rs. 4023 cr.
The stock then crashed because oh my goodness, Reliance is selling! This kind of knee jerk reaction was largely about retail traders panicking, but the damage was enough to take the stock down to 190 levels. With an F&O ban, there was no way to arbitrage any fall either.
On 29th November 2007, the futures would expire. The stock had closed at 192 the day earlier. If it didn’t sell anything today (it wanted to, but didn’t *have* to), Reliance would close a profit of over Rs. 60 per share on the hedge of 8 cr. shares, which was around Rs. 480 cr. That’s just on the hedge – remember they had made a lot of money (4000 cr., most of which was a profit) on selling the stock itself already.
But markets have a way to beat you up. The stock rose over 10% to 222 by 3:00 pm. This threatened the Reliance profits on the hedge.
And Reliance acted. They sold 2.29 crore shares in the last 10 minutes of the day.
The price fell from 224 to 209.8, giving an average price of Rs. 215 on the market. (They didn’t square off any futures, they let it expire at 8 cr. shares)
In 10 minutes with around 8 cr. shares short in the futures market, Reliance also sold 2.29 crs. of shares, hitting the market with Rs. 500 cr. of volume in 10 minutes.
To give you a context, even today, 10 years, later, Reliance shares themselves trade only 500 cr. in an entire day. They hit that much in RPL in 10 minutes. Obviously the price had to fall.

Prices Lower Than The Bid

SEBI is also miffed that in these 10 minutes, orders to sell were placed BELOW the best bid. Meaning there was a better price, but they chose to sell at a price below (limit order).
SEBI says this is indicative of manipulation. In reality you have to do this because the best buyer may want to buy just 10 shares. But you want to sell 2.29 cr. shares. And you have 10 minutes. So yeah, you will place orders lower than the bid.
(You could otherwise hit market orders, which SEBI would deem even more manipulative)

The End-Result: Reliance Fined, Can’t Trade Derivatives For A Year

Reliance has been fined for all the profit made in the futures trade – of Rs. 447 cr. Plus 12% interest a year since then. This adds up to around Rs. 950 cr.
They also cannot trade derivatives for a year. This means Reliance can’t buy or sell futures or options.
This DOES NOT MEAN Reliance shares cannot be traded by you in F&O. Reliance shares will continue to trade normally in both the cash and derivatives segments.
Reliance will contest this ruling. It’s been trying to get a consent order on it for the last decade, and pay a lower fine. But the order is strongly indicative of fraud, and Reliance won’t want that to hurt its name, or pay that massive fine. At least, not easily. It will appeal to SAT and perhaps later, to the Supreme Court.

The new SEBI chief, Ajay Tyagi, seems to be a no-nonsense guy. This case has been stalled because of a lot of political pressure on SEBI, apparently. Tyagi took over recently and has let this happen, which is refreshing.
Reliance was going to pay a fine. It knew that. That’s why it wanted a consent order. The question is largely about “how much”. And now, it also means the murky details are out, which would have been hidden in a consent order. So while it appeals to save reputation, a fine of some sort will eventually be paid.
The amount isn’t a big deal. Even Rs. 1000 cr. will not crimp Reliance much, and remember it made nearly 4500 cr. on that one RPL month, selling about 20 cr. shares of RPL. And later, in March 2009, it bought Chevron’s 5% stake (22.5 cr. shares) at a price of Rs. 60. Just the difference between the two prices in 18 months would have made it about Rs. 4000 cr. in profit including the hedge. The money isn’t punitive, so shouldn’t hurt that much.
In general, I believe position limits are too small. We should allow them to be increased. In today’s day, such a sale would be done by QIP. Such shares will be thulped onto institutions in big blocks, and those institutions love to buy and buy and buy. Money is flowing, so such QIPs are easy. You don’t have to do hedges and all that. But what Reliance did is what larger participants have to do if they want to sell in the market. But Reliance could have done it better – selling evenly through the period, not maintaining a higher hedge than necessary and so on.
Taking away the profit on such transactions is good regulation, but weak. To deter players, you need punitive damages so others don’t do it. And as we’ve said, today such transactions are done wholesale rather than retail. In the retail market, there are far more manipulative trades rigging up stock prices and letting them fall, and SEBI needs to address that as well.
Also read: Suckered: Manipulating Expiry Prices, Ruchi Soya Edition
And: Akruti: The Mega Short Squeeze
Disclosure: No positions on Reliance. RPL Doesn’t exist: it merged with Reliance at an effective price of Rs. 60 per share. I used to own RPL shares at the time – bought around the IPO, and sold my positions around the Rs. 200 mark. I was miserable for a few days watching it hit Rs. 270 but hey, all’s well that didn’t end at Rs. 60 instead.11