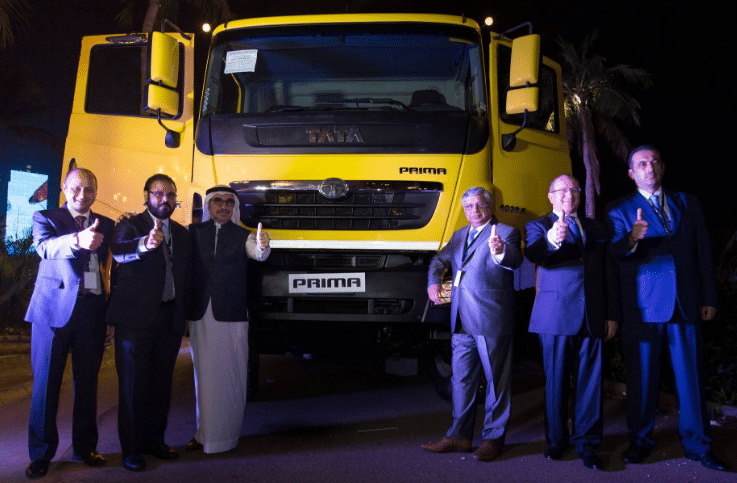 After a successful launch of its premium SUV Hexa under its IMPACT design, Tata Motors followed this with a delivery of over 1,498 units in the first month of launch. The other model – Tiago to have come from under this IMPACT design will soon be offered under the Automated Manual Transmission (AMT) technology in two petrol variants in the month of March, 2017. With this AMT technology, Tiago will challenge the market share of Celerio AMT and Grand i10 AT. Tamo is also looking to launch Tigor from the stable of IMPACT design.
The new sub-brand created by Tata Motors has been named Tamo – which will most likely come out with a two-seater sports car which is expected to be launched after 2018-19. This sports car will be unveiled at the Geneva Motor Show in March. This is what Tata Motors had to say:

TAMO, the company said, will operate on a low-volume, low-investment model to provide fast-tracked proofs of technologies and concepts, which will translate to mainstream cars in future. The company is setting up offices in Silicon Valley, the UK, Europe and India to create a web of incubators, which will contribute for the TAMO brand.

To improve its current line of products after having tasted success with the IMPACT design, Tata Motors new product strategy will involve only two new platforms as compared to current six platforms.
This is what Mayank Pareek, President, PV Business, Tata Motors said:

In line with our new PV strategy, our portfolio will include a mix of brand enhancing products and ones that are well aligned to the rising aspirations of the different target customer segments. Our strategy is to deliver 7-8 product variants from two platforms, for greater coverage and sizable economies of scale.

Our new architectural approach supports our effort to reduce complexity, enables future technologies and ensures global relevance. We have mapped technology solutions in key areas such as powertrain systems, ADAS and enhanced connectivity to our future product portfolio and have defined the application framework. Our goal is not to just comply with the emerging regulations but be ahead of the requirement.

Now that the future roadmap on Passenger Vehicles has been streamlined, on Commercial Vehicles front, Tata Motors is looking to launch a revamped version of its ground breaking vehicle – ACE. Closer to April (with BS IV in effect) the company hopes to hit the markets with 2 versions of the product XL versions of the Ace Zip, Ace and Mega Ace (a quick flash back – Tata Motors currently is the leader with a 62% share in the 1.0-1.25 tonne mini-truck segment for several years now. However, new entrants like Mahindra & Mahindra’s Maxximo, Jeeto, Supro and Ashok Leyland’s Dost have slowly chipped away their market share). The XL versions of the Ace will allow for 15% higher payload and will come with BS IV diesel engine options, new interiors and power steering as standard.
Here is what Ravindra Pisharody, Executive Director (Commercial Vehicles) at Tata Motors had to say on the Commercial Vehicle strategy of the firm:

When you are such a strong leader and companies are coming out with new products, discounts play a major role. We have a responsibility. If we start looking at market share at any cost and aim to get back to over 60% share anyhow, that will drive the whole industry down. Where it suits somebody, they are aggregating products and are projecting certain volumes in total LCV market. We still hold 55% market share in M&HCVs, and in the past 18 month we have not lost any market share. Yes, we had lost some share earlier.

There are products such as pick up (by competition) whose price has been brought down closer to an Ace (Tata’s best- selling LCV). When you get a pick up at Rs 4.5 lakh, it becomes difficult for a customer to go for an Ace. With our launch of Ace Mega, we are gaining market share. Xenon Yodha was launched in the traditional pick up format in January.

We HAVE intentionally decided to play a ‘more balanced game’ in last 18 months and have stayed away from discounting beyond a point. Discounts hit a new high during the first month of demonetisation (November 2016 and from our past experience we do know that discounts do not get you anywhere. 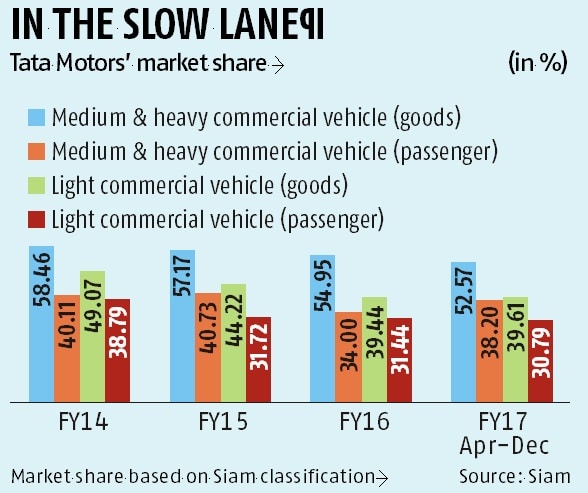 The launch of our next-generation range of Tata PRIMA heavy-duty commercial vehicles is an important milestone in our journey towards further enriching the value trucking proposition, in one of the largest construction and infrastructure hubs in the Middle East.

Shaped by technology know-how and expertise from across the globe, the Tata PRIMA is world-class in every sense, enabling customers to upgrade to a next-generation commercial vehicle, with the trusted credentials and reliability of the Tata Motors brand, as they ready themselves for the next wave of growth in the country’s logistics sector. As the country readies itself to become the largest construction and infrastructure destination in the world, we at Tata Motors are geared up to meet customers’ requirements of the market and will continue to introduce new products and solutions as we move forward.

Tata Motors also expanded its partnership by signing up with both Microsoft and Volkswagen. The partnership with Microsoft will allow Tata Motors to leverage Microsoft’s Connected Vehicle Platform technologies that bring together artificial intelligence (AI), advanced machine learning and the Internet of Things (IoT) capabilities on the global, hyper-scale Azure cloud. The concept car from TAMO will feature this technology and will be unveiled in the Geneva Motor Show. The partnership with Volkswagen is more on a joint venture or a technology tie-up with Tata Motors looking to use the Volkswagen’s MQB A0 platform.
Tata Motors reported sales of 47,573 units in February, 2017 against 46,674 units during the same time last year resulting in a growth of 1.93%. 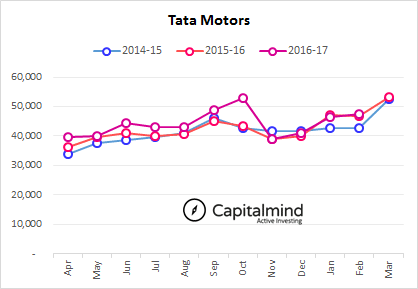 Tata Motors’ passenger vehicle business grew by 12% in February owing to a continued strong demand for the Tata TIAGO. Our recently launched lifestyle UV HEXA, has received an encouraging response and going forward our robust product portfolio will drive growth in the coming months