Sales of Passenger & Commercial Vehicles stood at 3.78 lakh units in February, 2017 against 3.48 lakh units during the same time last year resulting in a growth of 8.5%. 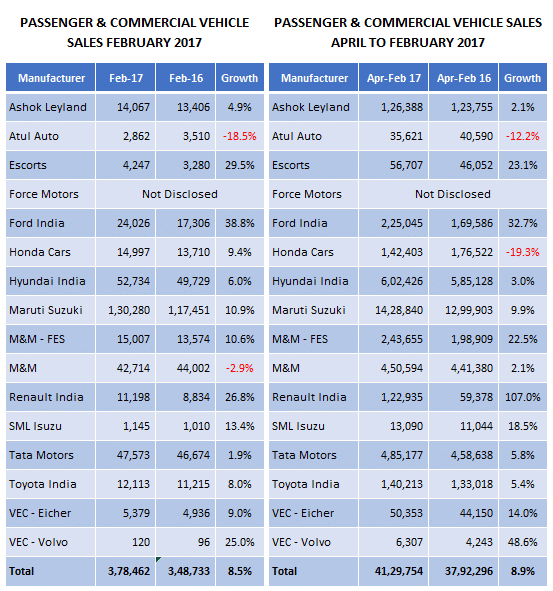 Ford EcoSport 2017 – that’s the new 2017 facelift of Ford’s compact SUV for the Indian roads – this is what one of the media reports state. The new Ford EcoSport 2017 if true, would come with a new front grille, reworked front and rear bumpers, and new infotainment system complete with Apple CarPlay and Android Auto commands.
Ford reported sales of 24,026 units against 17,306 units in February, 2017 resulting in a growth of 38.8%. 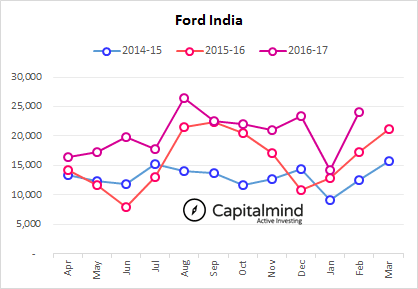 The industry is seeing some green shoots, recovering from the impact of demonetization. Ford continues to grow faster than the industry, which bears testimony to our three-pronged strategy of product led transformation, busting the myth of cost of service and enhancing dealership experience.

The Korean giant has geared up its product’s portfolio as it takes on both the bigger players in the larger SUV market and the smaller players in the passenger cars market. Hyundai is reportedly eyeing the launch of 8 new products over the next 3 years for the Indian market including the recently unveiled facelift of Grand i10, Elantra hatchback, a New i30 and the New Accent. The other models that the company plans to launch are full hybrid sub-4 metre compact SUV on the concept of Carlino, a small family concept car above its entry product Eon in the B segment, a new sedan (completely refurbished Verna) and a compact car in mid segment.
Managing Director and CEO of Hyundai Motor India said:

With India becoming No 3 in the world for parent in terms of volume, it has been decided to capitalise with a slew of new segment products as well few upgradations for next three years to completely utilise our existing capacity in Chennai. The company is ready to bring down its exposure on exports to exploit the huge potential in India.

Over the years, the export component of the company’s total sales in India has come down from 40% to less than 25% now and may go down further to meet rising domestic demand owing to new launches. Having crossed the half a million sales mark in India in 2016 (500,537 units sold), the company hopes to post a high single digit growth in 2017 on the domestic front and may cross 700,000 mark in total sales in 2017.

We will expand and strengthen our product line with eight new launches equipped with new technologies out of which, three will be new segment products and five will be full model change, apart from regular product enhancements and facelifts. Accordingly, in Auto Expo in February 2018 we will showcase our strong hybrid IONIQ and in second half of 2018, of the three new segment products we want to introduce a new family oriented concept and design led product, followed by a sub-4 metre SUV in first half of 2019. 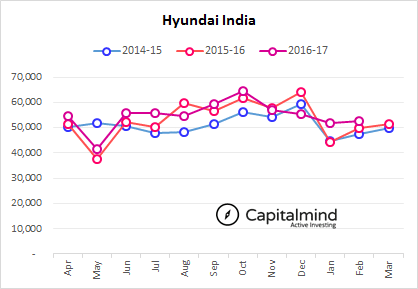 Hyundai with an all-time highest ever sales of 9,002 units of The Perfect SUV– CRETA had a domestic all models volume of 42,327 with a growth of 4% with increased customer visits and conversions on the strength of improved customer confidence generated by the Union Budget positively impacting the customer disposable income and overall business sentiments. With this Hyundai also continues its positive growth momentum month on month strengthening its brand trust within the customers.

In the mid of February, Honda launched the new 2017 Honda City. The model (since this is just a facelifted version of the existing mode, the upgrades are only going to be cosmetic) is up for booking against an amount of Rs. 21,000/- and will take on its rivals Maruti Suzuki Ciaz, Hyundai Verna, Nissan Sunny, Renault Scala, Volkswagen Vento and Skoda Rapid. Priced at Rs 8.49 lakh, Honda has already received close to 5,500 bookings within 12 days (latest numbers 7,500 bookings in two weeks) of the launch with 70% bookings for the petrol variant.
The new Honda City 2017 is offered in 5 grades. Petrol Manual Transmission will be available in S, SV, V & VX grades. Petrol CVT will be available in V, VX and the ZX grades. The diesel manual City will be available in SV, V, VX & ZX grades.
The launch comes after the launch of the recently updated versions of its compact sedan Amaze and Brio Hatchback.
Honda Cars India President and CEO, Yoichiro Ueno said:

The Honda City has been our most successful model ever since the start of operations in the country. It commands tremendous loyalty among customers and we are extremely excited to add another chapter to the success story of the model with the launch of the new Honda City 2017.

We are so overwhelmed by the response to our new City. We have already received more than 5,500 bookings for the new City. And with this we hope to regain the market leader in the segment as well as to regain our premium player tag.

After the New 2017 City, rumours are abound over Honda now brining in a new Civic and sports vehicle WR-V. The WR-V which is based on the Honda Jazz platform may hit the markets as early as March.
Honda Cars India President and CEO, Yoichiro Ueno said:

I cannot reveal much but we are launching the WR-V which is based on the Jazz platform. This car will capture different kind of customers in India and we hope it will drive the sales in the coming weeks.

The CEO also confirmed that the company does not have any plans of introducing a sub-Rs5 lakh category car in the near future though the segment accounts for close to 50% of the new car market. He said:

Below Rs. 5 lakh we are not launching. Maybe it is not our market. We are talking about a couple of years. In the long term, (when) big motorization comes and this sort of small cars become very popular, we might consider. For a while, we aren’t considering.

To aid the production of the current models and for future expansion, Honda has purchased a land parcel of 380 acres in Gujarat for Rs 1,000 crore. This new site is at Vithalapur, about 80 km north-west of Ahmedabad, where Honda last year opened a facility for two-wheelers (current facilities are at Greater Noida and Tapukura, Rajasthan which have combined production capacity of 2,40,000 vehicles).
Honda Cars India President and CEO, Yoichiro Ueno said:

This is at a preparatory stage. It depends on our sales pace. Currently, we have our 240,000 capacity in Noida and Tapukara. Currently, our sales are not exceeding that capacity; we have to exceed that capacity in order to further expand capacity. However, Tapukara plant has some space to increase production. If we exceed 240,000 units not really necessary to build a new factory. May be it will take a while. We don’t have any specific timing to start a new factory. 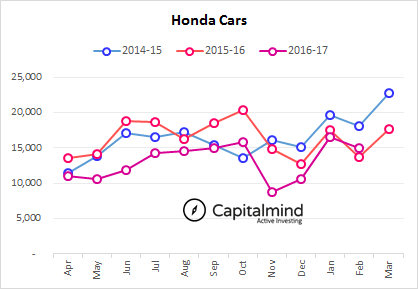 The market has shown positive sentiment during February and HCIL has also benefitted from it. This month’s sales growth has been driven by an excellent response to the New Honda City 2017, which has received over 10,000 bookings so far. We are thankful to our customers for their support to Honda and hope this momentum will continue 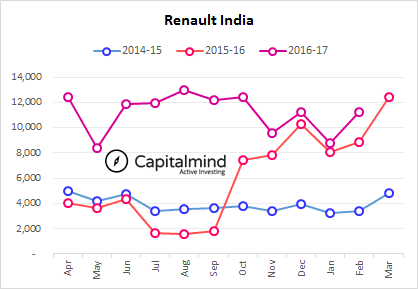 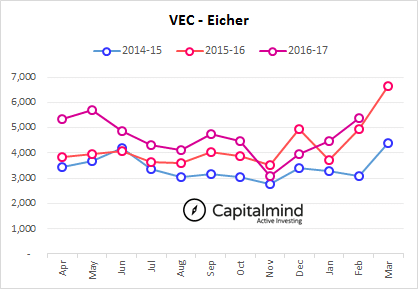 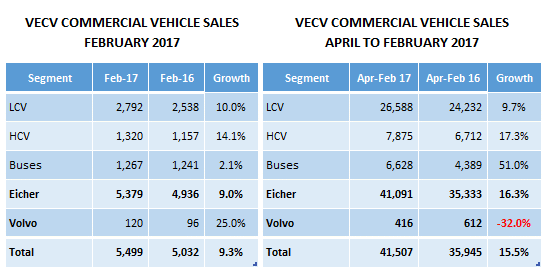