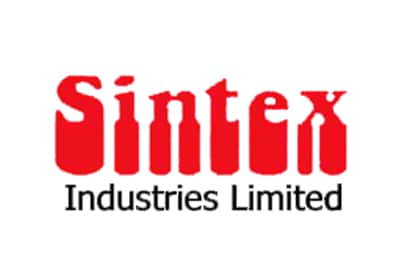 The best companies are those that have figured out the optimal way to allocate capital. When promoters diversify into areas that aren’t related to the original vision and mission of the company, its seen as a case of bad allocation and one that could pull down the performance of the firm. Very rarely does a diversification do wonders.
Sintex is a 90 year old company and its name has become a generic name for Plastic Overhead tanks.  It was, a very long period of time, known as The Bharat Vijay Mills. While it’s the World’s largest manufacturer of Plastic Tanks, it is also Asia’s largest manufacturer of corduroy fabrics.
Sintex also owns through acquisitions: moulding units for the auto industry in Bright Autoplast, European injection moulding units in Nief Plastics and a US Composites units through Wausaukee.
A demerger of Sintex Industries has been on the cards for a long time. The board approval for the demerger came in September 2016. The National Company Law Tribunal  approved it on 23rd March 2017.
Now, after they announce a record date, they will demerge the company. And look at hte chart: The stock has been climbing higher since January 2017 and is recently hitting new 52 week highs though the stock is still 30% below its 2008 high. 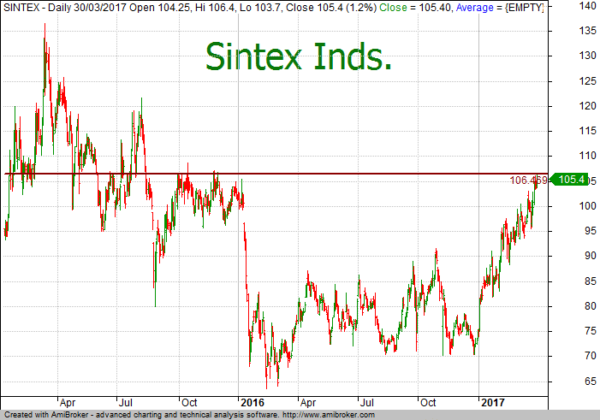 Let’s take a look at the Key Highlights of the Demerger:

What happens to the current shareholders? 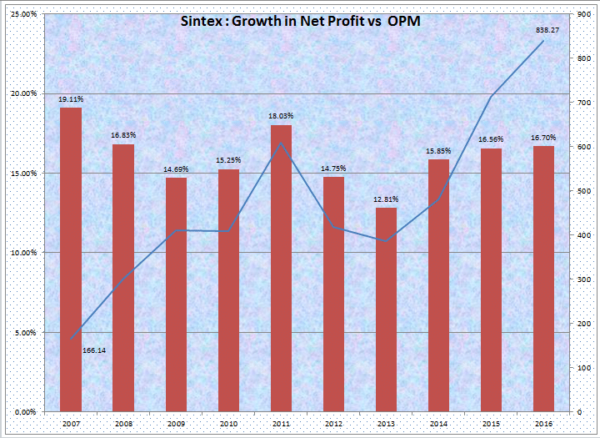 A spin off is generally accretive to existing investors. The sum-of-the-parts is usually greater than the whole.  With the stock trending higher, it’s quite likely investors recognise this.

Why the Demerger in the first place?

A primary reason for companies demerging their core and non-core operations is to attract buyers for their non core business which is attractive as a standalone business, but it doesn’t add that much value to the core.
This is visible in many places – Arvind Limited recently demerged its infra business and listed it – and the prices of both entities jumped. Marico demerged Kaya and Polaris spun-off Intellect – all of which have been good.
Sintex has a lot of debt, currently at 6300+ Crores. Its Market Capitalization is 5,500 cr.. This even as Mid Cap and the market as a whole has seen a strong rally in recent times. Some of this debt is Foreign Currency Convertible Bonds (FCCBs) which inflates the debt component. (If they convert, the FCCB will no longer be debt)
While most such companies eventually find themselves straining under a debt burden that gets tougher to service every year, thanks to sustained growth in sales, Sintex has managed to keep a cap on the percentage of Operating Profits that goes to servicing debt. 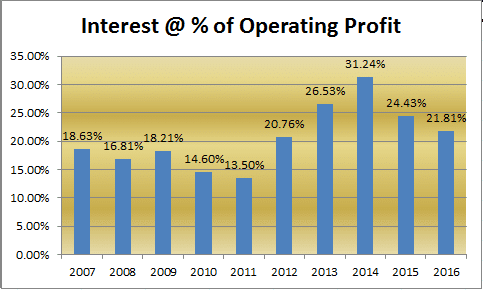 Recently, Mint reported that the company was in talks with large PE funds for raising of money for the Sintex Plastic, the new company that will be coming out of the demerger.

They have recently issued $110 million worth Foreign Currency Convertible Bonds (FCCBs) which can be converted to equity at a fixed price of 92.16 at a rupee to dollar price of a fixed 67.4463.
That means that if all FCCBs are converted, 8 crore shares will be issued fresh. The current outstanding 52 crore shares will become 60 crore shares, which means a dilution of around 15% from current levels. The current EPS of about Rs. 12 per share will actually fall to Rs. 10 per share. Even then the company isn’t too expensive at Rs. 105, because the P/E still is at 10.5.

Promoters hold 32.47% stake in the company and this stake has been constant over the last 1 year. Of the above holding, the promoters as of date have pledged nearly 70% of their shareholding.
The risk with a very high number of shares being pledged is the risk of a fall in stock triggering a sale by the entities to whom it has been pledged for.
Nearly 26% of the stock is held by Foreign Institutional Investors which is a comforting factor.  In addition, Government of Singapore and other Foreign Companies hold a additional 4.83% stake.

Buying before the demerger might actually help us realize gains after the demerged stocks are listed. There will be two eventual companies – one that holds the custom moulding and plastic tank manufacturing, and one that does textiles. The textile unit is one of the largest yarn manufactures in India and competition like KPR have done well.
The plastics business has all the foreign subsidiaries and much of the FCCB debt, and can then be sold or operated independently.
Most importantly the stock was stuck at the FCCB conversion level of 92-93, which has now been broken. Beyond 100, the stock looks like the dilution impact is less important for the market now (people who buy stock will dilute and sell)
Disclosure: We have recommended this stock in a Capitalmind Premium portfolio.