We come across a large number of interesting stocks in Capitalmind SNAP Outliers, our discovery tool for stocks with momentum. See a video of how Outliers works, and how to use Outliers to find all-time highs. Here’s a stock we found interesting that’s been an outlier.
We take a quick look at Astral Poly Technik (NSE:ASTRAL). This is a Grade 6 Outlier.

Astral Poly Technik Ltd is a manufacturer and provider of CPVC piping and plumbing systems in India and has been listed on the stock exchanges since 2007. In addition to pipes which contribute nearly 74% of its revenue, its other product segment is Adhesives which accounts for the remaining 26%. The company is headed by Sandeep P Engineer, a Chemical Engineer by profession with more than 30 years of experience. 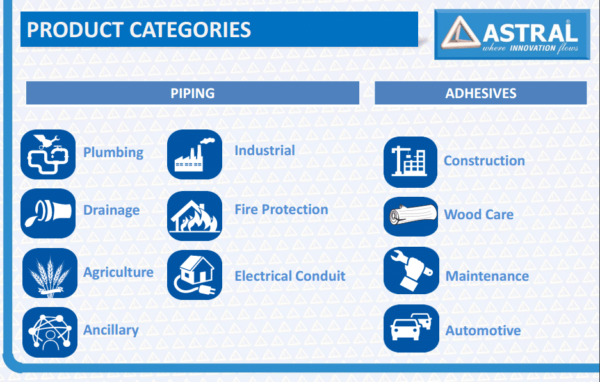 Thanks to its deep expertise in the field as well as tie-ups with global giants, the company serves a number of product categories most of which are complimentary in nature.

Astral closed at an all time high (ATH) twice in the last 30 days, and is making a new ATH after a year, at a level it’s not broken since 2015. Also, with two days close above the upper Bollinger Band, we have some serious momentum.

The stock saw a stupendous growth in its share price, partly due to its earnings and partly due to its valuation of P/E as it got re-rated from the low single digit to a high of 80 though currently it trades just a notch below 50 (Consolidated earnings). 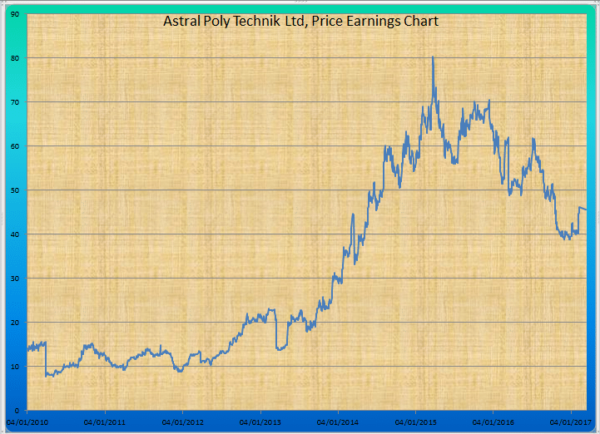 In fact, as the following numbers show, performance / growth hasn’t been any great in recent times with EPS seeing just a 10% growth over the last couple of years. But this seems to have changed in the current financial year where the profit after tax for the last 9 months has already crossed the profits for the entire financial year 2015–16.

A reason for the stock to come to the highlight of ordinary investors is when a large investor takes a substantial position in it. This trigger generally prompts other players to take a closer look at the company, along with those who coat tail such investors blindly buying in.
In 2015, noted value investor Sanjay Bakshi named the Managing Director of Astral, Sandeep P Enginner, as one of 7 intelligent fanatics.
Ashish Kacholia, a noted investor whom we cover in our Big Whales report  was also a big investor in the company though he exited the company in the financial year 2015. In addition, Axis Long Term Equity Fund, Steadview Capital and Tree Line Asia fund have institutional stakes of about 3% each in the company.
At the current  juncture, just a little over 10% is held by retail investors with the rest  being split between the Promoters who hold 59.34% stake and large investors / institutions holding the rest.

We don’t have view on the stock, but this is an interesting outlier. With high returns on capital (around 20% on equity, and 18% on capital employed) this company has good fundamentals and strong momentum behind it.
While the stock looks expensive relative to its historical mean, the strong growth in earnings could carry it through. The making of a new all time high through a two year resistance has, in our experience, been a good indicator of a strong uptrend.
Disclosure: No positions.