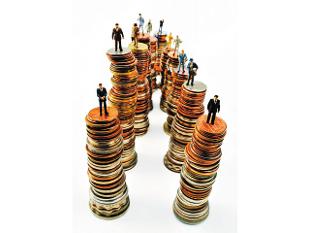 #bonds: How is tax on NCDs calculated?

People at the highest tax rate will have to pay about 30% tax on NCD income instead of the lower capital gains tax rate. One Mint

The Amtek Auto fiasco appears to have had a rub-off effect on the Indian mutual fund industry. Franklin Templeton Asset Management, the country’s seventh-largest mutual fund, has seen redemptions of a little over Rs 11,500 crore from its debt schemes in September from August. Economic Times

#bonds: Know the tax treatment of gains on bonds before investing

A risk parity model is used to construct portfolios that seek to equalize the contributing risk of each asset class under consideration. Risk parity portfolios typically have lower volatilities and higher Sharpe ratios as a result of effective risk based diversification. Stephen Marra

Managing risks is crucial, and risk parity looms large as one way to achieve it. The financial crisis led investors to take a closer look at asset allocation techniques that emphasize the diversification of risk. ETF.Com

#general: Sears, Kmart owner has ‘substantial doubt’ it can stay in business

The company that operates Sears, the department store chain that dominated retail for decades, warned Tuesday that it faces “substantial doubt” about its ability to stay in business unless it can borrow more and tap cash from more of its assets. Kare

India’s government is likely to sell part of the stakes it holds in Axis Bank Ltd., ITC Ltd. and Larsen & Toubro Ltd. through an exchange-traded fund (ETF) this year, people familiar with the matter said. Shares of the three companies fell. Livemint

India’s finance ministry has called bankers into a meeting on Friday to discuss setting up a new facility to absorb surplus cash in the banking system, according to a letter sent to all heads of lenders seen by Reuters on Thursday. Financial Express.

#general: In Digital India, EPFO’s UAN portal out of order; helpless employees left in the lurch

The much touted e-Sewa facility of Employees’ Provident Fund Organisation (EPFO) for universal account number (UAN) holder members is down since past few months. This has left thousands of UAN members in lurch as they are clueless as to whom should they contact to address their grievances. Money Life

So I wrote a few words about Aadhaar. Will be happy to be proven wrong if you find something incorrect https://t.co/CHKBAR0gP7

Vasupal, founder of the online accommodation aggregator, was arrested on March 14 on a charge of cheating, after a vendor complained that dues of Rs 1.69 crore were not paid by the company that had also suspended its operations. Business Standard

India’s current account deficit widened to $7.9 billion, or 1.4 percent of gross domestic product, in the October-December quarter from the same period a year earlier, the Reserve Bank of India (RBI) said in a statement on Thursday. Times of India

Lenders to paper maker Ballarpur IndustriesBSE -1.33 % (BILT) have proposed to invoke strategic debt restructuring (SDR) and seize control of the flagship unit of the company that contributes as much as 85% of the operating profits of its publicly traded parent. Economic Times

Ppl who talk about FII buy figures in cash not talking about their stock fut sell figures.. why ? pic.twitter.com/s1K8Rt51hj

#stocks: Greenply: preparing for a better future after GST

Greenply getting ready to meet the expected higher demand as a result of implementation of GST, which may encourage a shift from unorganized to organized markets. Livemint

At least 84 per cent of the current Jio users are expected to subscribe to its Prime membership in April, a survey conducted by Bank of America Merrill Lynch. Economic Times

#stocks: Is D-Mart India’s Walmart in the making? What explains its success

India’s Walmart in the making, as a number of analysts have called it, is Avenue Supermarts Ltd, the parent company behind a chain of supermarkets and hypermarkets called D-Mart. Business Standard

#general: The 34-Year-Old Hedge Fund Manager Who Bet Everything On A Stock That Tanked.

Vadim Perelman was a young hedge fund hot shot not so long ago, overseeing a portfolio in the hundreds of millions at the age of 31, hopping on corporate boards, and issuing lengthy slide presentations about his favorite stock picks. But then Perelman placed an enormous bet on a single company, Walter Investment Management. Forbes

The state government has directed its officials to restore the licences of permit rooms and bars on national and state highways. The order is based on an opinion from attorney general Mukul Rohatgi that the Supreme Court’s ban on liquor shops on highways applies only to shops where liquor is sold in retail. Times of India

#trading-room: What fund managers are buying in the smallcap, midcap space

Economic Times
Love it or hate it, do leave us with your reviews in the comment section below!