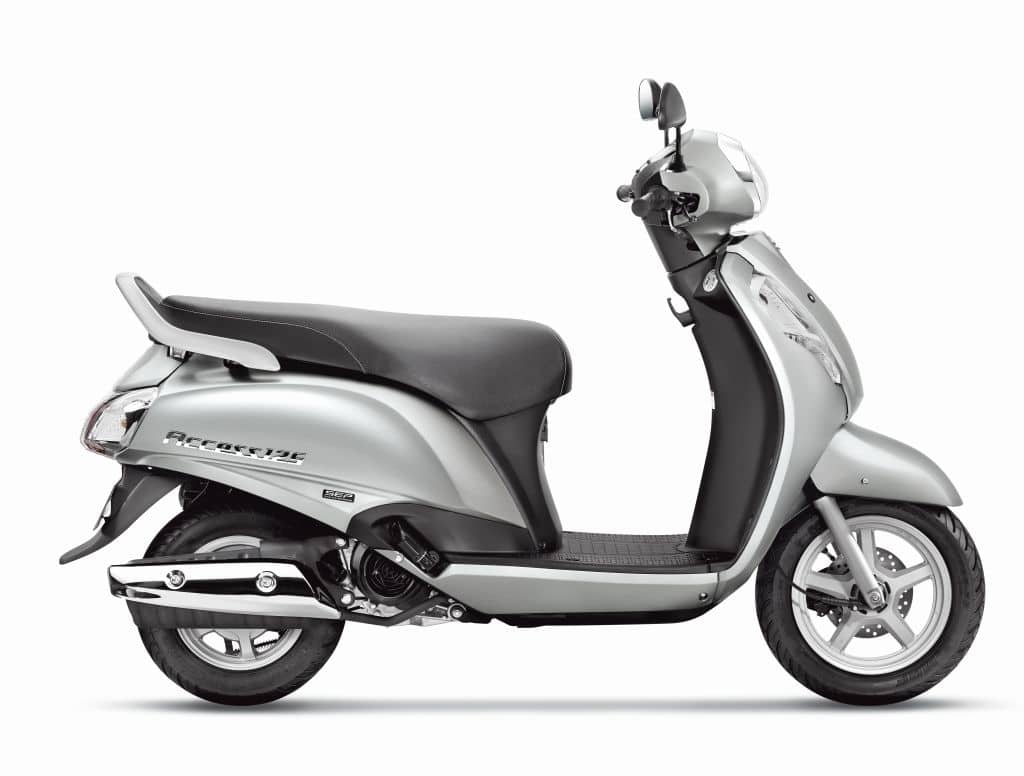 Sales of Two Wheelers and Three Wheelers stood at 14.38 lakh units in February, 2017 against 14.43 lakh units during the same time last year resulting in a contraction of 0.4% 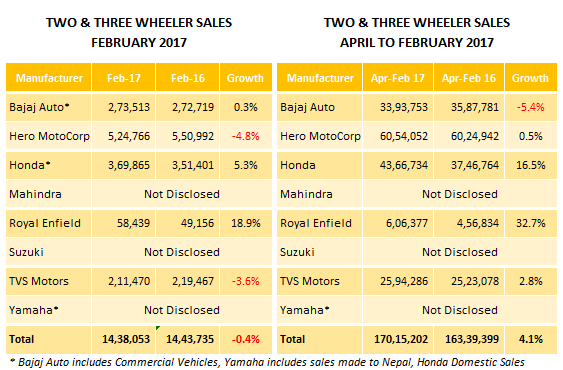 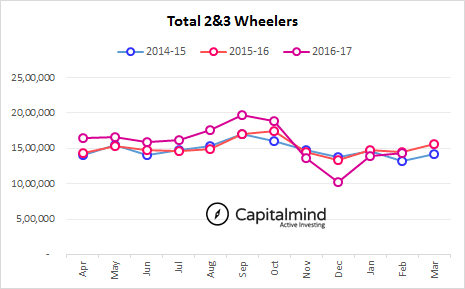 The parent company of HMSI Honda Motor Company has lowered its sales expectations citing demonetization impact. Honda has reduced its 2 wheeler sales target for the Asian region by 560,000 units to 15.975 million units.
Here is what Keita Muramatsu, CEO at Honda Motorcycle & Scooter India said in a recent interview:

HMSI launched BS IV complaint Activa 125 and CB Shine SP. One of the requirements effective April 1, 2017 is that the headlamp of all two-wheelers manufactured in India should be equipped to automatically turn on as vehicle starts to improve visibility in all conditions also known as AHO – Automatic Head Lamp On.
The New Activa 125 became the first scooter in the country to come equipped with BS-IV engine. HMSI confirmed the price variance between the older versions and the BS IV complaint was only Rs. 500/-. Also rolled out was the 50 lakh unit of CB Shine from the Tapukara plant in Rajasthan which as well comes with a BS IV upgrade. With this HMSI now it’s stable of BS IV complaint models – CB Shine, CB Unicorn, CB Hornet, and Activa.
Just this week, Honda launched the Activa 4G with BSIV compliant engine. This is HMSI’s second launch in India this year after the new-gen Honda Activa 125, which was introduced last month. 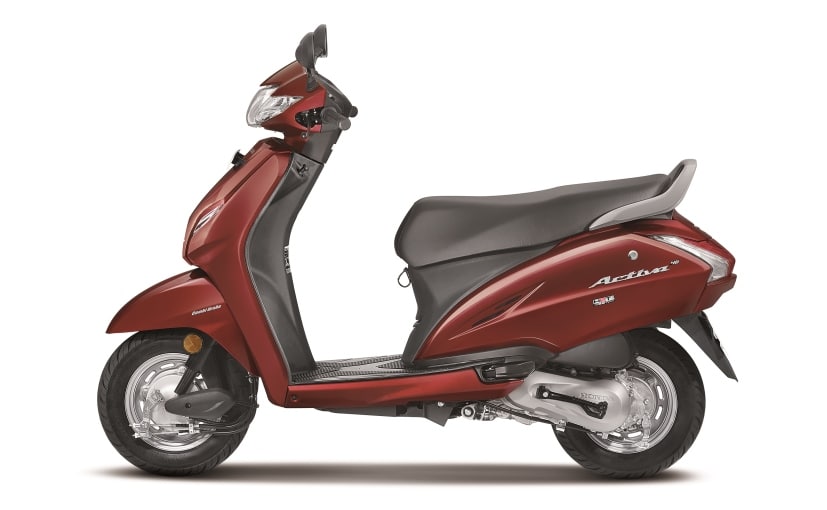 With trust of over 1.5 crore Indian families, Honda’s iconic Activa is the first automatic scooter to become not only India’s but also World’s Number 1 selling two-wheeler in 2016. The fourth generation BS-IV complaint upgrade of the most loved family scooter -Activa 4G is ready to delight customers once again with added convenience of mobile charging socket & new colours.

Honda reported sales of 369,865 units in the Domestic Market against 351,401 units during the same time last year resulting in a growth of 5.3%. 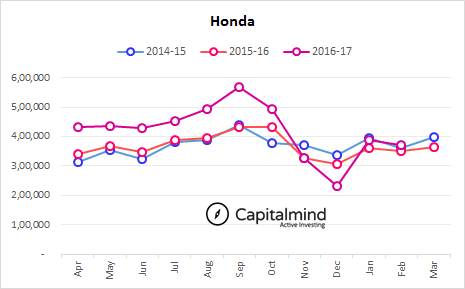 The company in its statement said:

Over HMSI grew by 13% growth (YTD February’17 Domestic+Exports) and the company also claims that its market share increased by 1.4% at 27.2% in February’17. HMSI emerged as the highest volume contributor with 24,150 units added in overall two-wheeler industry, Honda said in a media report. Company’s exports grew 39% from 1.84 lac units YTD to close at 2.56 lac units in April’16 to February’17.

With the continued momentum of recovery post demonetisation, Honda has emerged as the first choice of Indian 2Wheeler customers. This recovery period has been favourable for Honda, as we continue to grow with a 1.4% increase in domestic market share of 27.2%.

For Honda, our market strategy is well placed and from today i.e 1st March 2017, we have started production of only BS IV models at all of our 4 plants. The customers will be delighted with the complete new BS-IV compliant line-up with AHO in the coming days.

With BS IV compliance closer on the horizon, Suzuki launched the updated versions of Gixxer, Gixxer SF and Access 125. All the models are expensive by a little over Rs.1,000/- compared to the older versions.
Commenting on the re-launch, Suzuki India – Managing Director, Satoshi Uchida said:

Since their launch, the Gixxers and the New Access 125 have gained immense popularity in their segments. In order to provide our customers with environment friendly technology in line with the latest regulations, these vehicles now comply with BS-IV and also feature AHO. We are also refreshing this range with new colour & graphic variants. For the New Access, the Metallic Sonic Silver is aimed at the fashion conscious customers who are looking for more options in terms of modern styling. The Gixxer and Gixxer SF 2017 variants will appeal to the young rider who wants to make a style statement on their mean machines. We are confident that these new colours will find universal appeal and further propel our growth in their respective segments.

Yamaha India’s parent company Yamaha Motors reported their 2016 annual performance with a 5.2% growth in Net Income while attributing the growth to business expansion in emerging markets and improved profitability in various business sectors.  Increased sales of higher-priced products and cost reductions were witnessed in emerging markets such as India, Vietnam and the Philippines. For 2017, Yamaha Motor expects to grow income and profits with only forex being the major party spoiler.
Yamaha India on the other hand, initiated a recall of over 1,000 units of YZF-R3 bikes stating that the step was part of a global recall by the parent company which has detected a defect in the bike’s Fuel Tank Bracket and Main Switch Sub Assy.
In a statement released, the company said:

The YZF-R3 is an exceptional performer and has been very successful on Indian roads. As a responsible manufacturer, Yamaha has initiated a factory modification campaign under which the defective parts will be replaced with a modified one on ‘free of cost’ basis at Yamaha dealerships.

The replacement activity would begin immediately as the company would communicate with customers directly. This recall is a reiteration of Yamaha’s commitment to the safety of its customers by offering safe and satisfactory products.