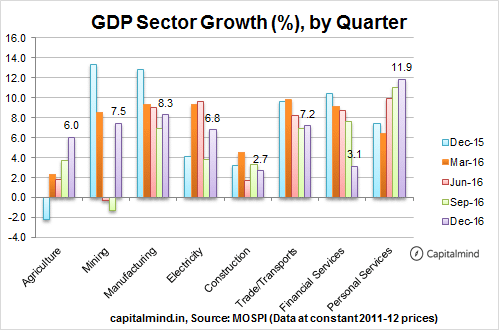 India’s GDP data is here. You might not believe it, but it’s here. The numbers are interesting. Nominal growth was up about 10%. Real growth (Nominal minus inflation) was up about 7%, over the December quarter in the previous year. 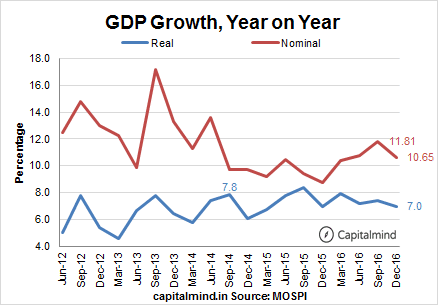 A lot of people, including me, wonder how we could do this in the Demonetization quarter. There are good explanations, and entertaining ones, but we’ll come to that later. Note carefully that:

Private consumption went up 10% in the demonetization quarter. Which is surprising! 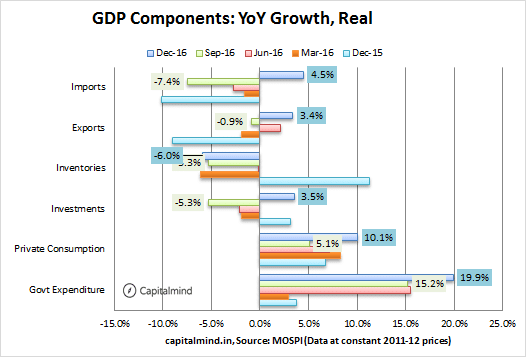 But apparently, explanations defending this noble data are coming out of the woodwork. These are likely, though, and some are that:

However what is perplexing is:

Agri growth at 6% is understandable since we had a lousy quarter the previous year. But when people couldn’t transport goods, we saw a big growth in Trade/Transports. Personal services (which includes government services) went up over 11%!

Inflation was only 3.8% so while the nominal growth rate fell from the earlier quarter, the impact on real growth wasn’t as much. 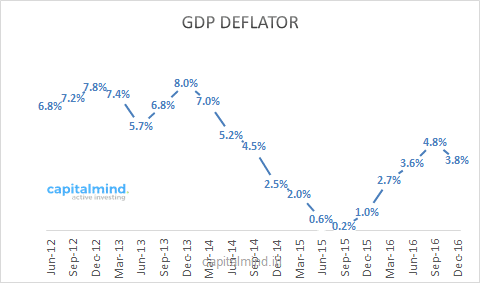 Our View on Demonetization was Wrong, But At Least We Didn’t Sell

We had mentioned in our post that there could be a contraction in the economy going forward. While this data looks difficult to believe, it’s the only data we have. So we’re going to have to believe it. So it appears like demonetization has had no impact in any meaningful sense, on the GDP. (This could change if later quarters show something lousy, but why predict again when it’s obvious that an earlier prediction didn’t work?)
But there was something interesting – we continued to maintain our Capitalmind Premium Long Term Portfolio, and created an entirely new Momentum Portfolio which has done well. We remained invested in nearly everything – selling only about two stocks and adding many more during the process. The idea was – and we mentioned that in the post – to invest over time, to not panic-sell, and to continue to find good opportunities. We’ve been lucky enough to have had some good stocks, but then it didn’t matter if your stocks were good or bad in the last two months.
There are some interesting points in a Pronab Sen interview (he was India’s chief statistician):

Q4 is usually a brilliant quarter. But if we look at the data right now we see low credit growth (still less than 5% year on year), rising interest rates (yields are up big time), a difficult time for two-wheeler and rural sales.
This will be another interesting quarter to see – if all it takes to move GDP numbers is change a “projection” formula, then we can have GDP at whatever level we want. There will always be valid-sounding explanations for everything. Perhaps it’s just easier to live in a post-fact world and buying companies selling spectacles with rims made of roses.