Today we cover the Form 483 [What is a Form 483?] issued by the US FDA [United States Food and Drug Administration] to Dr. Reddy’s API manufacturing plant at Miryalaguda. On another note, the company’s formulation manufacturing facilty at Duwada, Visakhapatnam also went through the re-inspection process which completed 2 days ago on the 8th March and has reported 13 observations.
You can catch all our detailed coverage of Form 483s issued here for Alkem Laboratories, Divi’s Laboratories, Lupin, Glenmark and Sun Pharmaceuticals. Additionally you can catch all content written on pharmaceuticals here.
This is not a recommendation to buy or sell the stock. Analyst and family do own some of the positions listed here. Please assume we are biased.

The US FDA reported three observations to the plant that had received its first warning letter in 2015 [The warning letter issued to Dr. Reddy’s sometime in November, 2015 was what led us to start covering pharmaceutical stocks in detail. You can catch our first coverage of this warning letter here].

Failure to prevent unauthorized access or changes to data

After allowing the company a total time of more than 12 months, the US FDA team inspected the company’s facility from the 13th February, 2017 to 21st February, 2017 – for a total of 7 days and reported three specific observations [down from the earlier 4 reported which led to the warning letter].

Dr. Reddy’s Miryalaguda plant is one the key facilities for PSAI (Pharmaceuticals Services and Active Ingredients) which clubbed together with the Srikakulam. Though the warning letters did not curtail the production or shipment of products from these facilities, the remediation led to delayed dispatches.
However, it did mean that unless and until the outstanding issues were corrected to the U.S. FDA’s satisfaction, the U.S. FDA may withhold approval [currently withheld for Xeglyze from Srikakulam which the company had won the right to sale in United States, Canada, India, Russia and the CIS, Australia, New Zealand and Venezuela from its commercialization deal with Hatchtech] of new products and new drug applications of the Company, refuse admission of products manufactured at the facilities noted in the warning letter into the United States, and/or take additional regulatory or legal action.
Coming back to the Form 483, here are the three observations reported Reba A Gates (GUDFA lead Inspector) and Jose Lopez Rubet (Chemist).

As part of the test method validation step – the stress (forced degradation) studies done for a particular product failed. Additionally the chromatographic purity test profile [Chromatographic Purity means presence of unknown impurity, calculated by % area] was found different than that obtained during the method validation.
The data supporting validation activities performed to demonstrate the suitability and adequacy of the analytical method used for the release and stability testing of a particular API was found to be inadequate and incomplete.
Validation Documents showed that the validation of the methods does not contain complete forced degradation studies.

Calibration of the Gas Chromatographic [common type of chromatography used in analytical chemistry for separating and analysing compounds that can be vaporized without decomposition] was incomplete. The following were not covered in the calibration report – oven temperature, noise and drift, signal to noise and detector accuracy tests.

Test method for the ultraviolet Absorption as part of USP monograph identification test was not followed. Calculations were performed with the absorbance readings instead of absorptivity [more here on the difference]. These modifications to the USP test method and calculation formulas were not validated.

While most of the observations are too technical in nature, we believe the second and third observations to be less critical since it is a procedural process that can be resolved with the help of the manufacturer of those instruments.
We think the first observation on test methods is something that the company may have to fix immediately since the FDA team needs to be satisfied by a detailed answer/ remediation or through a re-inspection alone. 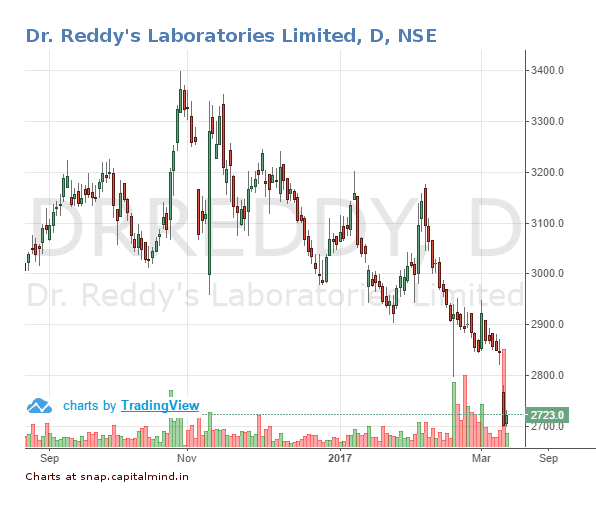 While the failed re-inspection of this facility did not create ripples, the stock has fallen 3% since the news of the failed re-inspection of the oncology formulation plant at Duvvada in Visakhapatnam.
Moneycontrol has reported speaking to company executives and external consultants that the observations are minor and can be correctable.
Love it or hate it, do leave us with your reviews in the comment section below!