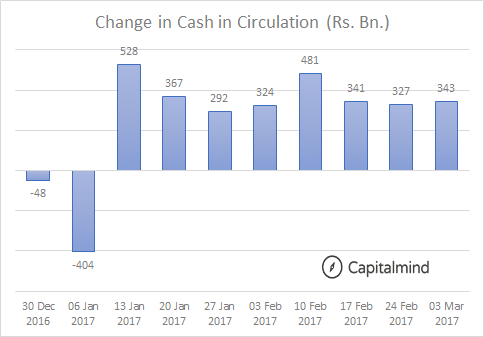 All that cash that went back to banks because of the demonetization of Rs. 500/1000 notes is now starting to flow out again. We’d been initially told that the cash returned would be LESS than the number of notes outstanding but it looks like that’s no longer the commentary, and all the money has come back.
Even now, banks are flush with cash, but people are drawing cash out at the rate of about Rs. 30,000 crores per week. Around 12 lakh crore is now back into the system since December 31. That’s about 300,000 crore rupees more per week of cash being added into circulation.
(Note: 1 billion = Rs. 100 crores. RBI’s gone to billions, but no one really understands what that means so while the graphs show billions, our commentary continues in crores.) The change in cash is significant since the beginning of the year. And till Feb 20, only Rs. 24,000 per week was allowed to be drawn from savings accounts, and since then the limit’s up to Rs. 50,000 per week. From March 13, there are no more limits – and we might see cash being added to circulation till we pass the point where we started (17.9 lakh crores).
Note here – 1,000 billion = 1 lakh crores. Just for reference.

This is not ordinary. Before demonetization, we did see weeks where cash went up big time, and other weeks when they didn’t. Still, 30,000 crores (300 billion) is much more than what we have seen, on average, earlier. 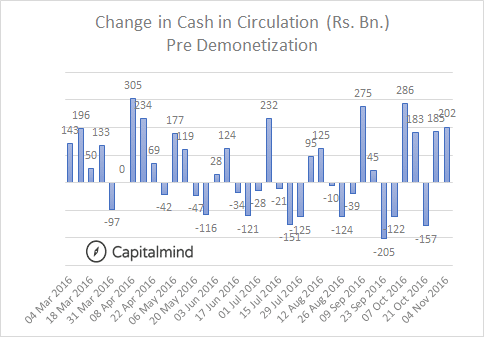 As cash comes back, banks lose deposits. Some banks have now put charges on withdrawals and deposits of cash. That will encourage people to make big one-time withdrawals and keep circulating cash outside the banking system, not to make “black money” but just to avoid bank charges.
Banks losing deposits means pressure on interest rates comes later in the year as cash levels go back to previous levels. This may have to be addressed separately by the RBI or the government.
Banks will also sell government bonds because when they lose deposits their SLR comes down, and they don’t need to own as many bonds. And they’ll have to pay their depositors with the liquidity they have, where most of it remains with RBI.
Cash also means well for the informal economy. This part of India has suffered, but is fast returning to normal (at Rs. 30,000 cr. per week).
We’ll track this metric over time. Let’s see if there is truly a digital revolution – we would like that at Capitalmind – or if we simply go back to the old system of cash transactions.