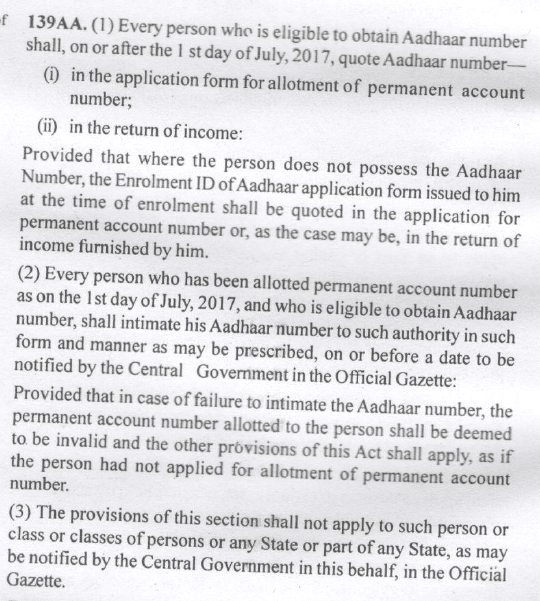 You now have to apply for an Aadhaar number if you don’t have one already. From July 1, 2017, you will need to link your Aadhaar number with your PAN card. This was a part of the amendments to the Finance Bill that was passed in parliament yesterday.\
The Finance Bill is part of the budget. So it doesn’t usually fail. But there’s been some amendments introduced as part of this bill that went through. The one we note:

It is super-strange to impose this on everyone. The wording also says that: if you don’t link your aadhaar to your PAN then we will cancel your PAN number and deny that you ever applied for it.
This is overreaching, and should be thrown out in court. (Laws can be challenged, and in many cases, have been overthrown) Of course, there is a simple way for this to happen: file your income taxes with your Aadhaar (it’s now required) and it automatically gets linked to your PAN (which is anyhow required to file your taxes). It’s the guys that don’t file taxes and don’t link their PAN who will have some trouble but most people here are in the lowest tax brackets so don’t expect a lot of enforcement.

Is This A Good Thing?

You can’t fight it. A single ID was going to happen anyhow – and PAN was nearly there, but Aadhaar became bigger. So in the financial world, the single id requirement won’t be a dramatic change. Of course, now your non-financial habits may trickle into your financial life – for instance, you may have given your aadhaar for your mobile phone number KYC, and suddenly, they can link your mobile usage to your taxes etc.
Such linking can happen today also, with currently present databases. Some people can mask this – and many do. Some of them are scared of privacy issues or of a big government overreach. Some others are criminals who take advantage of anonymity. Some of the fears of the former are valid, most of the fears of the latter are not.
In general, aadhaar has issues of non-redressal in case of stealing of privacy, or of rules that don’t appropriately prosecute fraudsters that steal your identity. Reversing an aadhaar-authenticated transaction (if it happened by someone stealing your fingerprint or phone or such) is currently complex and unruly.
These, however, are fixable. The benefits that a single id provides, especially for the poor, may outweigh the disadvantages (which in my opinion can be addressed, and there are lobbies trying).
A single id has already shown its use in distributing benefits, and PAN has been a very useful concept in linking things (like insurance, mutual funds etc). Moving that to a single identifier – one of the above – can help in the future.
Whatever the justification, the big thing about this move is: it has happened. It may be a point of concern that it happened *this* way, or that there wasn’t adequate debate etc. But to position yourself for the future, it may just be better to ride this trend than to sit it out – get a number, link it to your PAN and be done with it.

You know that from April 1, any shares sold which didn’t have STT when you bought them (say in an IPO, or as ESOPs or such) will see taxes on profits. That’s what the finance bill says.
But in the memorandum, it was mentioned that “legit” transactions will still be tax free (long term capital gains on shares has no tax). These were supposed to come in as amendments in the finance bill. But no, they have not.
So now we have to wait, for some time in the future, for some MORE clarifications via Income Tax “Rules”. This is zany because you can’t plan taxes this way. If you bought DMart shares in the IPO then according to current rules you will be taxed on gains if you sell them after April 1. They need to clarify this part – and they have not.
The media narrative will remain focussed on whatever people in the know want it to be. So we’ll note that the new UP CM is doing X or Y, but the issues that affect us will probably not be discussed. Some things never change.