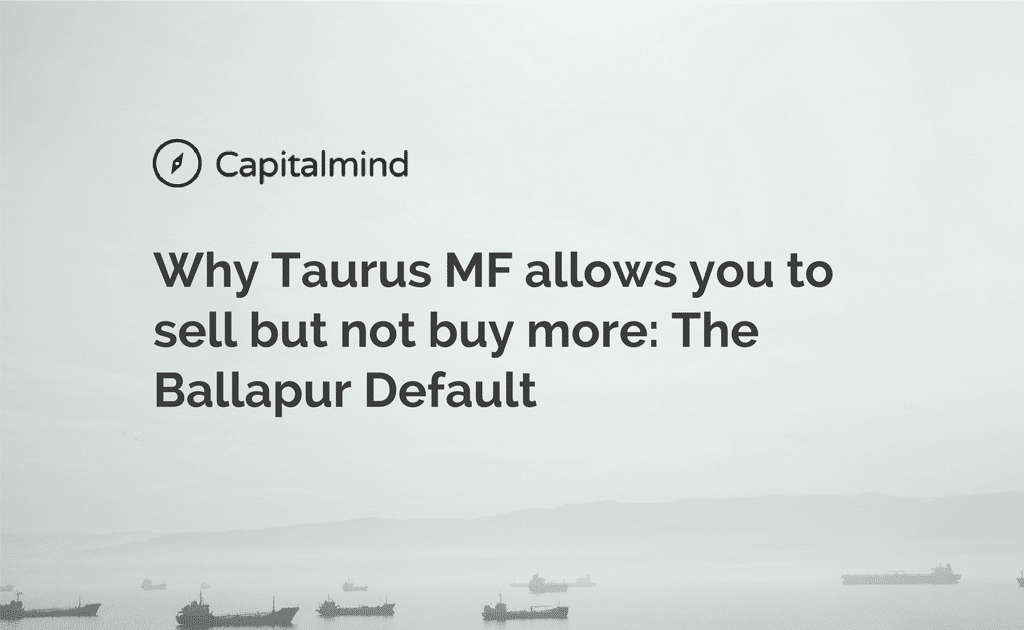 Taurus Mutual Fund, which saw a few debt funds lose a packet on their NAV when Ballarpur was downgraded to default, has done something interesting: They will no longer allow fresh subscriptions into the four impacted funds: Taurus Liquid Fund, Taurus Ultra Short Term Bond Fund, Taurus Short Term Income Fund and Taurus Dynamic Income Fund.
You can sell your units anytime you like.
You just can’t buy any more units.

This is a fair deal for investors

What if Markdowns Were Less than 100%?

Taurus could have even said that the mark down was only 75%. That means, they expect to recover 75% of the money in Ballarpur. That makes little sense too. Why?
Because the Ballarpur debt is now illiquid. To sell, they would have to sell the other securities they hold. Assume they had 10,000 rupees of AUM, of which Ballarpur was Rs. 1000. An NAV of 100 with a markdown of Rs. 250 (25% of the Ballarpur debt assumed to be hit) would result in an NAV of Rs. 97.5 (or an assumed AUM of Rs. 9750 )
Now assume that 95 people put a sell order. That means the fund has to liquidate Rs. 9,263 to pay back – but only Rs. 9000 can be gotten (since Ballarpur has no buyers). Game over.
And the disproportionate return to new investors continues, at the expense of older investors, with the same logic as above.
Remember that SEBI no longer allows funds to easily gate withdrawals either. (See post) So it is in everyone’s interest to mark the bad asset down to zero and then mark it up based on actual recovery. (Investors should have the patience to wait, otherwise they take a larger hit)

But They Need To Segregate

If they can’t take more investments into those funds, then Taurus doesn’t have a liquid fund or an ultra short term fund anymore, for fresh investors. SEBI won’t allow them to create a new liquid fund because the current one exists (and AMCs can’t have two funds doing the same thing).
The best option now would be:

We hope SEBI will consider this action – it remains the best for such purposes.

Q: But These Funds had a 4-Star rating from ValueResearch or a 5-Star from MorningStar!

Well, yes. But so what.
There is no reason that you should believe a rating. From anyone. If someone’s money isn’t on the line, then it’s that much more difficult to be honest about your assessment because you have nothing to lose.
Secondly, Funds, including liquid funds, are not risk free. They come close, but such elements of risk will always surface somewhere. Banks isolate you from such risks (unless they go bust, which is where you lose 100% or close). But you are paid for the higher risk through a higher return.
No one can easily figure out which company’s going to default, and for investors to know this will be crazy. Even most advisors won’t know, except some banks where they know only because their own loans are in as much trouble. Banks however will only inform their biggest customers of any such information.
What’s wrong isn’t that VR or MorningStar rated it highly but more that you relied on it.
(Don’t rely on any rating, including of Capitalmind. Think on your own.)

Q: Should I exit?

We get this a lot. But the answer is truly no.
Ballarpur isn’t a wilful default and they have been paying back, a little every month, according to reliable sources. So they are likely to pay. And that will result in money coming back to you as an investor.
So no point getting all antsy and exiting. If you can hold on, do so.

Q: This is Unsafe and Horrible and all!

Other funds had Ballarpur too. DHFL Primerica’s Low Duration fund had about 50 cr. in Ballarpur debt in November. That somehow vanished in December. This is true of a lot other funds. The typical way to do this is that the sponsor of such funds (the AMC) will take the bonds on to their own books and take the loss, while leaving investors in the fund with no loss. But Taurus isn’t big or deep pocketed enough to do this.
Banks and NBFCs too have exposure. They will just take time to write it off!
Nothing is “safe”. But it’s better to get some risks this way, than to be exposed to 100% risks all the time.
However, early information to other banks etc. is a concern, since they would have told their customers to exit such funds.
There’s no reason why we should trust other people’s rating. There’s no reason to fear defaults. The true rule now is to bet on funds that have a lot more AUM and low concentration risk, and second, to buy into funds where, potentially, sponsors can help with exits of small losses. However, the latter part won’t work if too many companies default.

Buying only very larger funds can help, if they have diversified enough. (Need to check their portfolio regularly) Buying only large AMC based funds (HDFC, Reliance, UTI etc) will help for smaller defaults but not if there is a systemic default situation; however that might be the best alternative for now.
Ballarpur is a bigger banking problem with over 7,000 cr. in debt and deeply in the red. Results will be worse next quarter. But the default may only help in resolution if everyone agrees to take a small hit.