One of the ways through which poverty has been reduced in countries such as China / South Korea is in industrial growth. At some point of time these countries were similar to India economically at but have since sped away, thanks to growth in Industry. While much of India’s growth has come via the Service sector, Industrial growth has lagged.
Let’s take the case of China: Between 1965 to 2004 (WB 2006 data), the share of Industry as percentage of GDP went up from 35% to 46% even as share of Agriculture went down from 38% to 13%. Where are we in India?
Bank Credit forms a crucial part of Industry growth and if credit to industry falls, it means industrial growth too is slowing. PSU Banks account for 70% of the total banking credit and their inability to stem the rot in terms of growing Non Performing Assets has in recent times had a tremendous impact on the amount of credit available to Industry.
We look at Bank Sector data, reported to RBI on a monthly basis. Credit for Industry has seen a decline of 4.4% in December 2016. But this is not a one off incident as the following chart of distribution of credit between Agriculture, Industry, Services and Personal Loans shall showcase. On the other hand, Personal Loans which include Loans for Consumer Durables, Housing Loans, Loan against FD, Loans against Securities, Credit Cards, Education Loans and Vehicle Loans plus Other Personal Loans have seen an annual growth of 13.5%. Amazingly, 55% of this segment is contributed by Housing sector loans which have seen a 14% growth year on year.
In fact as the chart below shows, it’s a mirror image and one which doesn’t inspire too much confidence. 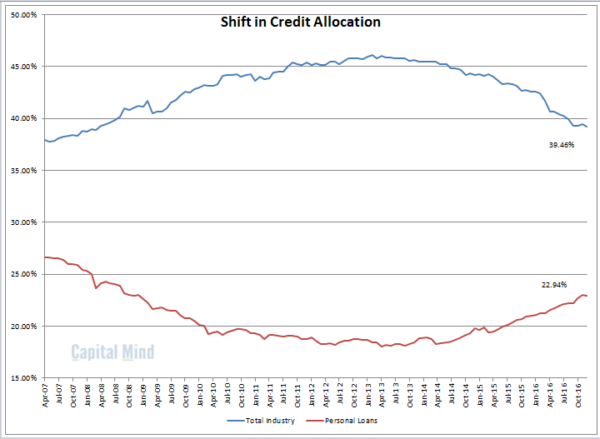 Loans to industry fell by over 1 lakh crores in December 2016. A good reason for it is the failure of the interest rate transmission system – banks refused to cut lending rates to corporates, but the bond markets allowed them lower rates. So many of the good corporates simply moved away to issue bonds (which were bought by mutual funds and insurers, apart from some banks) But a substantial cut has also come about because banks, having all those NPAs, find it difficult to lend to industry.

Loans to Housing continues to rise, even after demonetization, though at a slower pace. Of the 2.5 lakh crore increase in total credit in the banks that reported data, we saw over 1 lakh crore has come from an increase in credit to housing. (That means: loans to individuals for buying or upgrading their house)
Of this, loans to lower cost housing (“priority sector housing”) was a mere 18,000 cr.. Priority sector (or “low cost”) housing grew only 5.5% to the previous year. On the other hand, loans to high cost housing is up by 23%. Even more alarming is the steady slide in total share by lower cost housing (Limit for considering it under Priority Sector is 28 lakhs in Metro cities and 20 Lakh elsewhere) which over time has kept sliding with a crossover seen last year. 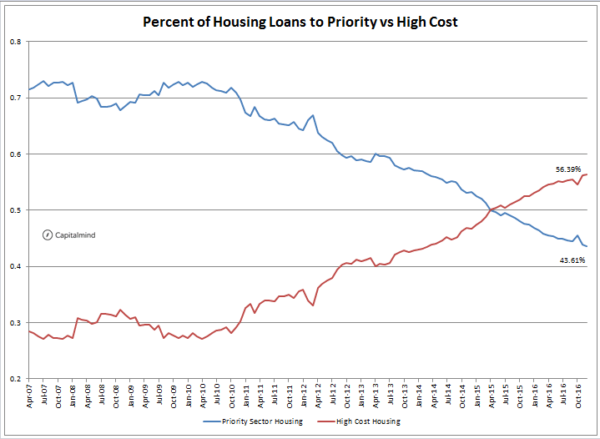 In 2016 (full calendar year) loans to housing were much higher than any other single category of lending. High cost housing was about 82% of all housing loans made in 2016. 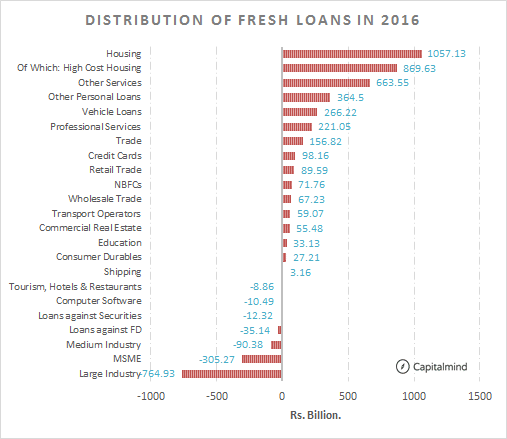 Why is this an Issue:

Even prior to the demonetization, we had seen a decline in real estate prices which has further weakened post the demonetization drive. Real Estate like most other industries is cyclical in nature with the only difference being in the length of those cycles.
While the rate of defaults hasn’t shot up in recent times, if the trend of falling prices continue and one accompanied by even a small amount of job losses, we are bound to see a spike in that number. Smaller home loans have seen defaults (see article that highlights some problems in loans upto Rs. 2 lakh) but in a typical smaller loan, the collateral can be seized and liquidated relatively easily.
As we have experienced in the Industrial sector, selling a small company which defaulted on its loan is far more easier than selling the big industrial empires that were once the crown jewels but now pack the NPA list. Smaller defaults resolve more easily and there are more buyers for smaller assets.
While Indian banks haven’t lent money to real estate in the way US Banks did before the 2008 financial crisis, the fact that this sector occupies a large part of the credit exposure could be a bit unsettling. And then, the focus on higher cost real estate brings about further potential problems. Will this be the bugbear in the coming years?
While Budget 2017 has allocated an additional Rs. 10,000 cr.  towards Bank Recapitalization, given the NPA numbers most PSU Banks are coming up with, it seems a case of too little though hopefully not too late.