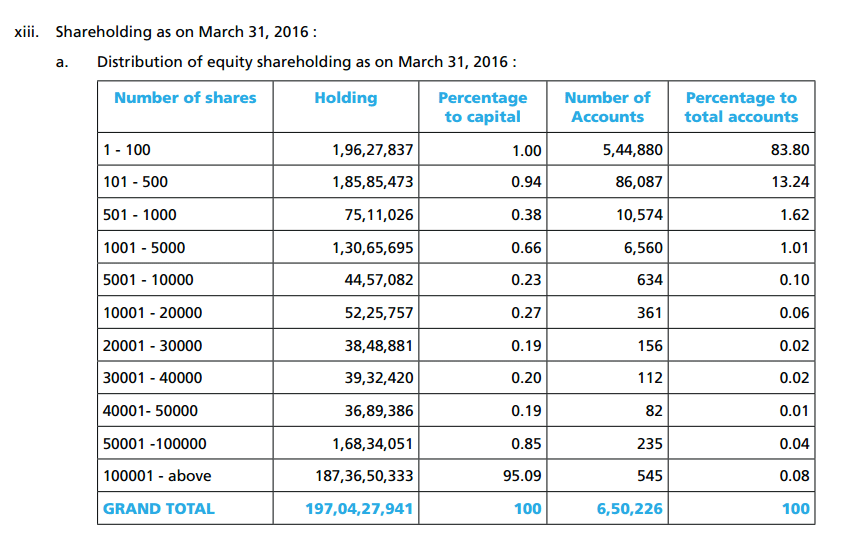 On 16th February 2017, TCS announced that its board will meet on 20th February 2017 to consider a buyback of shares. The stock opened gap up and closed at 2447, a gain of 1.4% for the day.
With slowing growth and not enough avenues to invest their surplus funds, the company has taken a decision to return a large part of the surplus money they have for now deployed in government bonds. If this goes through, this will be India’s biggest buy-back program, at Rs. 16,000 cr. being bought back, but this is just about 2.85% of the company’s shares.
One of the reasons the Tata Trusts had provided for removing their then Chairman Cyrus Mistry from his post was about declining dividends. Tata Sons had said, Quote “Dividends received from all the other 40 companies (many non-dividend paying) has continuously declined from ₹1,000 crore in 2012-13 to ₹780 crore in 2015- 16”
Given that the buyback is only of 2.85% (which is so small that it won’t increase their earnings per share that much) this buyback is akin to a large dividend. Shares are being bought back through a tender offer.
The board meeting note doesn’t provide details as to whether the promoters will participate in the offer which makes one believe that they will tender as well. With Tata Sons holding more than 73% stake in the company, a substantial part of the buy-back will go back to the promoters themselves. Given that N. Chandrashekaran has quit TCS to take over as the Chairman of Tata Sons, this should provide him ample time before the pressure of dividends kick in.
As per the Annual Report for the period ending 31st March 2016, TCS was holding cash (invested primarily in GSec’s) to the tune of 32,533 Crores. This has risen to 38,831 Crores as of 31st December 2016. Reserves and Surplus at the end of fiscal 2016 stood at Rs.65,163.52 crores.

The board approved a proposal to buy back up to 5,61,40,351 Equity Shares of the Company for an aggregate amount not exceeding Rs.16,000 crore being 2.85% of the total equity share capital.
Buyback Price: Rs.2,850.00 per share.
Buyback Mechanism:  Proportionate basis through a Tender Offer
Retail Arbitrage Opportunity: 15% of the offer has to be mandatorily reserved for Shareholders holding shares of a value of Rs.200,000.00 or less on the record date. In case of the TCS buy back, this will mean reservation of 84,21,052 equity shares or about 0.4% of the total shareholding.
As per its Annual Report for the period ended 31st March 2016, the shareholding pattern was as seen below While there will be a bit of change in the pattern as on the Record date, if we were to assume not a great deal of change and If everyone who held 80 shares and below tendered, that would mean a acceptance ratio of around 42%. (42 shares for small retail shareholders out of every 100 shares tendered)
“Small retail” means people who own less than Rs. 200,000 worth shares on the record date. At a price of Rs. 2500, that’s less than 80 shares.
At the buyback price, it’s a 14% premium to the current market price. But since the probability of 100% acceptance is very slim if none at all, Net returns for an investor buying TCS today and offering it in the tender would be around 6% (if shares that haven’t been accepted can be sold at 2500). If price moves back to where it was before the announcement of the board meeting date, the returns fall to 4%.
There is a possibility that many people do not tender, at least at the small shareholder level. Because they may be otherwise occupied and not have the time, or simply because they don’t remember or know about this process. That will increase the acceptance ratio for everyone – and a small shareholder acceptance will go up from 40% to perhaps as much as 60%.

An arb opportunity we have discussed in Capitalmind Premium has been to buy such shares before buybacks and sell them back. (See all our buyback posts) These have generated about 22% so far in about nine months. (Infratel, BEL, Jagran)
Since the time period for buyback to complete is around 4 months, this return is not worth the efforts and the opportunity costs that come with it. We think the price is quite likely to fall after the record date. Since all shares are unlikely to be accepted, you have to deal with the fallen price for the remaining shares.
But if you are a existing shareholder holding less than 80 shares and are willing to hold on to it for the long term, this can be a opportunity to get a small additional return by tendering the shares and then buying them back from the market.