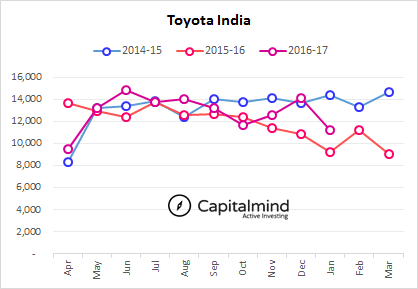 TKMs all-new Fortuner bookings stood at over 10,000 within 2 months of its launch. Having delivered close to 5600 units, Toyota is focusing on reducing the current waiting period of 2-3 months. 60% of the orders received were for the Super White colour unit along with a significant pull for the automatic transmission in both the four wheel and two wheel drive variants.
TKM also expanded its online portal www.toyotapartsconnect.in which looks to facilitate the distribution of genuine spare parts and accessories to the retail market. The portal was launched in August, 2015 on a pilot basis is now being expanded to cater to customers, retailers and other bulk buyers.
On the international front, TKMs parent company Toyota came under fire from the current American President Donald Trump as he blasted Toyota’s plans to make U.S.-bound cars in Mexico with the threat of imposing expensive tariffs.

In response to this Toyota said “production volume or employment in the U.S. will not decrease” as a result of its new plant in Mexico announced in 2015. Toyota looks forward to collaborating with the Trump administration to serve in the best interests of consumers and the automotive industry. Read more here.
Toyota Kirloskar India reported sales of 11,252 units in January, 2017 against 9,256 units during the same time last year resulting in a growth of 21.56%

Three months into demonetisation and we can slowly see that the market is reviving with increased footfalls and customer enquiries. This has been possible due to the overwhelming response the new Fortuner and Innova Crysta have received and we would like to thank our customers for the same.