#general: No proof required: Not business as usual

Budget 2017-18 is probably the most brilliant economic and political document since the path-breaking budget of 1991. Indian Express

Fintech startup Goal-wise says that computers take the fuss out of investing. Their weapon of choice: a proprietary algorithm that invests on your behalf. Bloomberg Quint

Dr. Reddy’s Laboratories said its net profit for the December quarter was down by 19% to Rs. 470 crore (as per IFRS) against Rs. 579 crore during the corresponding quarter in FY16 owing to drop in North American sales. The Hindu

This is one of the more enjoyable finance books I’ve consumed in my free time and I’ve read A LOT cc @ReformedBroker pic.twitter.com/9eCu0EZjwa

#general-from the past: Here’s why you should ignore tax-saving investment option under NPS

The Budget 2015 offers an additional tax saving option of Rs. 50,000 if you choose National Pension System (NPS) as an investment to save tax. Now you can invest up to Rs. 2 lakh and get tax deduction – up from Rs1.50 lakh earlier. Money Life 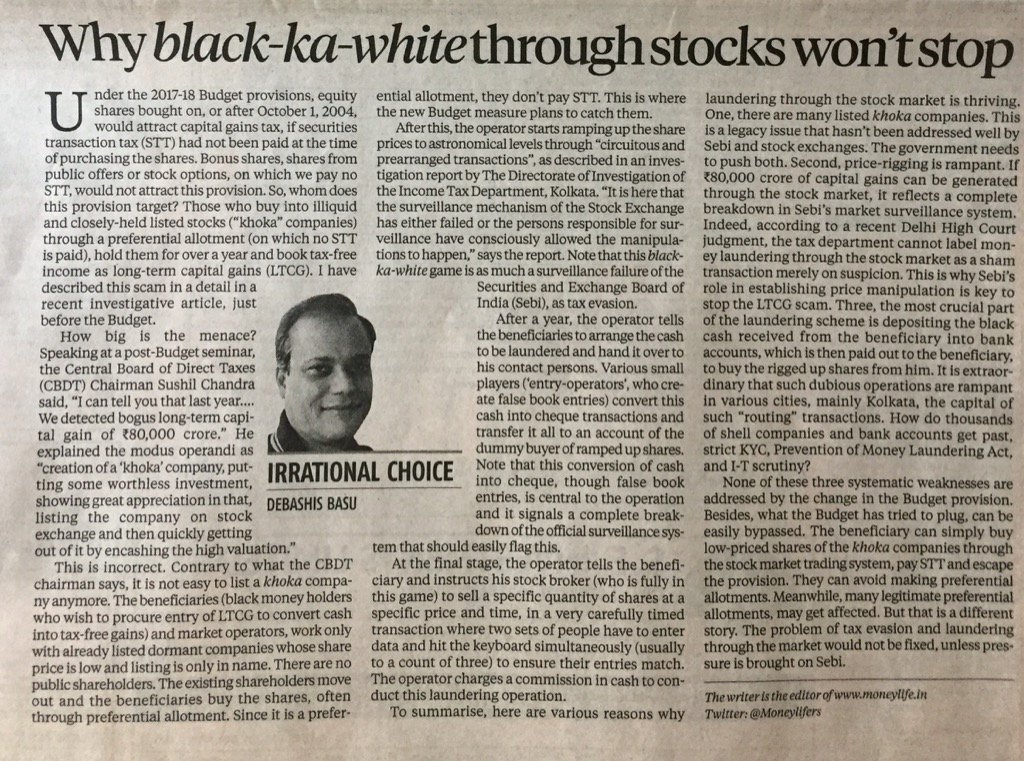 According to Monetary Watch, the Changying Precision Technology Company focuses on the production of mobile phones and uses automated production lines. The factory used to be run by 650 employees, but now just 60 people get the entire job done, while robots take care of the rest. ZME Science

In a bid to discourage cash transactions, the country’s second-largest private sector lender HDFC Bank has decided to steeply increase the fees for savings account holders on a slew of activities involving cash. The Hindu Business Line

Why do retailers charge extra VAT after discount on MRP, was one of the top read posers on Quora. Outlook India

While the deal size is still being deliberated, the share sale is estimated to be more than Rs 1,500 crore (around $223 million) of primary market offering, two persons familiar with the matter told VCCircle. This would value Au Financiers at around Rs 8,000 crore ($1.18 billion). VC Circle

#general: Most deposited Rs 2 lakh or more, some used one PAN for 20 accounts: Govt

Over two-thirds of the demonetised currency deposited in banks has come in the form of deposits over Rs 2 lakh — totalling around Rs 10.38 lakh crore. Indian Express

There is a widespread belief that equity market returns are strongly correlated to the GDP growth of a country. Is there merit to this idea? Take a look at this quick data. Money Life

#general: Narendra Modi has made it extremely unappealing to be a landlord in India

The Narendra Modi government is set to club tax incentives for self-occupied properties by bringing them on par with rental houses. Under the new regime, the deduction limit on interest paid for home loans taken for houses that a buyer is already occupying, will be the same as for those bought with the intention of earning rental income. Quartz

#general: Centre tells SC it plans to verify all mobile subscribers within a year

More than 90% of the existing subscribers were prepaid users and the Centre would adopt a mechanism similar to the one it has in place for verification of new subscribers, says attorney general Mukul Rohatgi. Livemint

Suzuki Motor Corporation’s India outfit Maruti Suzuki which has a 50 per cent share in the domestic passenger vehicle market, will become the biggest beneficiary of this mega deal. Money Control

#general: Can you believe this? Indian Bank, a century-old state-owned lender, is Asia’s top-performing bank stock

Indian Bank, a century-old state-owned lender based in the country’s south, has emerged as Asia’s top-performing bank stock in the past year, driven by a focus on consumer loans that are less likely to sour than corporate advances. Financial Express