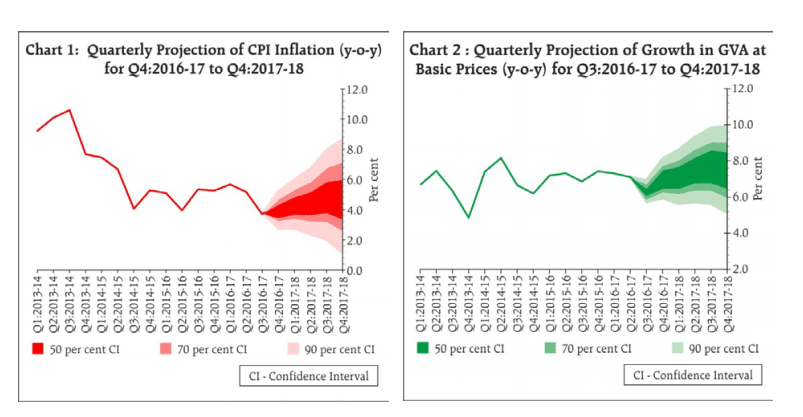 RBI leaves all rates unchanged, in a surprise move to remove the “accomodative” stance they had so far. They’ve moved to “Neutral” which could mean a change or end of the rate cut cycle.

Savings bank accounts still have a withdrawal limit of Rs. 24,000 per week. From Feb 20, this will be increased to Rs. 50,000 per week. And from March 13, there will be no limits.
This is pretty cool. There’s no change, however, in the limits for the Jan-Dhan account holders, we think, which still is a
This sounds convenient to the current election phases which will nearly be done by March 13. But it is likely a coincidence, and not really politically related.

Inflation Will Be OK, GDP Near Term Hit, Then Recovery

RBI believes we’ll be ok with inflation. They mention that they are quite unhappy about the fact that core inflation (minus food and fuel) is still not falling, and could be impacted by three things: Rise in crude prices, fall in the rupee and the increase of HRA under the 7th Pay Commission.
GDP growth (as measured by Gross Value Added) will be around 6.9% in Q4, and run up to about 7.4% next year, predicts the RBI.

The new 10 year bond (6.97%, 2026) saw its yield rise over 25 basis points in the course of the day. The price falls when bond yields rise, and that 10 year bond fell from 103.8 to 101.97, a near 2% drop.
Bond funds who invest in longer term bonds will see a fall between 1.5% and 3% today. This is likely to impact some balanced funds too.
Equities were “neutral” for the day. The market fell less than 0.5% and then recovered, and this is mostly noise. You can call it a crash and V shaped recovery if it makes life sound more exciting.

After revealing data every week in November on how much money was returned, RBI has turned mute on the note data since December 10. They now tell us that oh, there are so many currency chests in the country that reconciliation is difficult. This means one thing: they don’t want to tell us. It is unthinkable that the RBI does not already know.
The reasons why they don’t want to tell us are only conjecture, but it could simply be that the answers will yield way too many questions. Too many notes returned, and we will wonder what the demonetization drama was all about.

At this point there is just nothing to say. The RBI said nothing of substance.
There was a mention of bank NPAs being a problem. They are a huge problem, but there are no steps to mitigate.
There were no new measures announced. There is no progress on the setup of the India-wide factoring system that Rajan had spoken about. There’s no update on the Bharat Bill Payment System. There’s been no move to allow retail investors to buy government bonds either. There is definitely lesser transparency than earlier.
The RBI even decided to choose which reporters get to ask questions. This is also something strange, and reminds us of a yellow-haired president of a country who despises its media.
As much as I’ve been a fan of the RBI, the last few months have frustrated even the most staunch defenders of this institution. A rate cut or not is unimportant, but to have reversed the course of transparency is just disappointing.