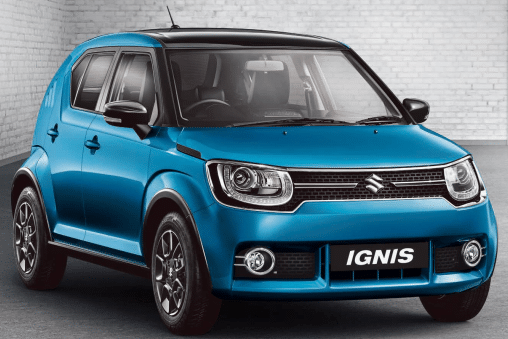 The 2017 Maruti Swift does remind me of many cars as the design of India’s best-selling hatchback gets evolved in its third generation. The front grille reminds me of the Jaguar F-Type while the hood is similar to the Fiat Punto Evo and the headlights have a similar flow as the Hyundai Elite i20. The side seems to be inspired from the MINI Cooper while the rear will surely confuse people with the Toyota Etios Liva but we can see the design has been influenced from Suzuki’s own Baleno hatchback. The design of the rear door handles are similar to the Chevrolet Beat. That’s a lot of cars in the all new Maruti Swift. Japanese version of compact SUV Suzuki Jimny will be christened as Gypsy in early 2018. The Gypsy would come with the 1.0 litre Boosterjet motor (same as the Baleno RS in 2017).  Also leaked stands WagonR and the WagonR Stingray will be launched in India by the end of 2017. 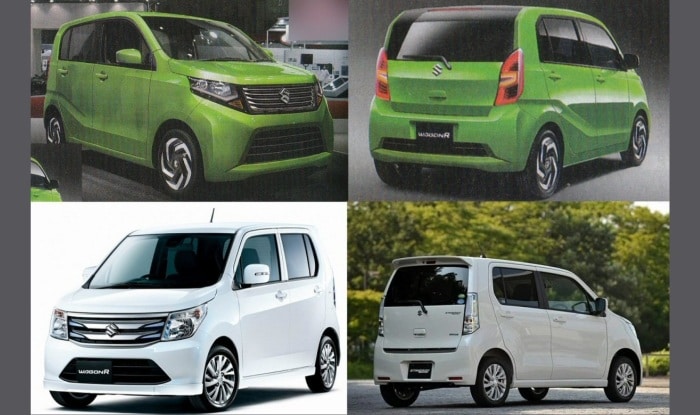 Maruti also reported that the company has posted highest ever retail sales in the month of December at 1.82 lakh units. This was confirmed by R S Kalsi, Executive Director, Sales and Marketing who said:

We definitely had the best retail sales last month backed by our efforts to counter the impact of demonetization and various schemes for corporates, rural areas etc.

Funky, fun, youthful, pricey…this is how Autocar India describes the car – something that isn’t expected out of a Maruti production line (The people at Suzuki New Zealand are describing the new Ignis as a super compact SUV). You can catch the in detail review of the new launch here by Economic Times, India Today, The Hindu.
Within a few days of the launch which took place on the 13th January, 2017 – Maruti received 6,000 bookings within 11 days of the launch which meant a waiting period in the range of 4-6 weeks. At 20 days since launch, RS Kalsi, Executive Director, Maruti Suzuki India said that the company has received over 10,000 bookings.
To be manufactured only at its Gurgaon plant, the model has been developed at an expense of at least Rs. 950 crore and has a 98.5% localization of parts. The car will be sold as part of the company’s premium dealership i.e. the Nexa Brand Outlet (which also sells the S-Cross and Baleno). Nexa is being built at a cost of Rs. 2,000 crore with each dealership contributing close to 5 crore in building the infrastructure, stockyards and promotion of the showrooms.
While the Ignis may improve the company’s market share in the sub 4 metre segment, the surging demand for Ignis will only strengthen the company’s books since this also puts pressure on the backlog of Baleno and Brezza which as of 25th January has a 24 weeks and 18 weeks respectively. On Ignis the latest backlog is for 8-10 weeks and Maruti is targeting 21,000 units to be produced until March. Catch all features and details of the car here. Ignis has also been launched in Australia as a “light SUV” as the company tries to attract first time buyers to its brand. Suzuki Australia anticipating sales of up to 400 units a month for the Japanese-built car.
Kenichi Ayukawa, Managing Director of Maruti Suzuki commented on the Nexa and Ignis:

Ignis combines unconventional design, seamless smartphone experience, auto gear shift, advanced safety features and personalization options. It will help us expand our presence in the premium compact segment. We are aware that the life and priorities of our customers are fast evolving. If we have to keep pace, we must demolish traditional categories and think afresh. Just like the customer is thinking.

Maruti Suzuki plans to expand the number of Nexa outlets to 250 by end of FY 2016-17. With regard to long term plan, by 2020 we are planning around 400 Nexa outlets. The new Baleno RS model would be introduced through the Nexa channel within this fiscal year.

Our own analysis of the list of showrooms published on the company’s site reveals that the company as of 31st January had a total of 196 showrooms including the above inaugurated 200th showroom with presence in 116 cities against the stated 121 cities. 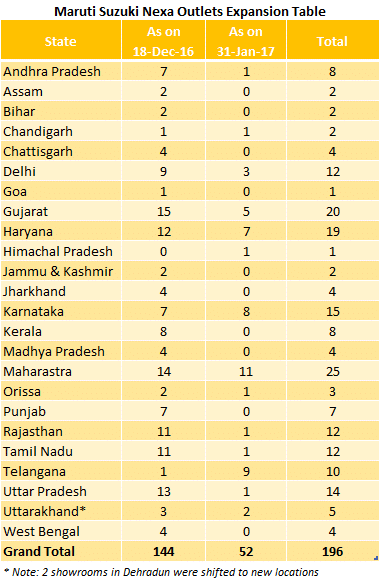 Here is how the company has spread it Nexa network in a span of a month and half: 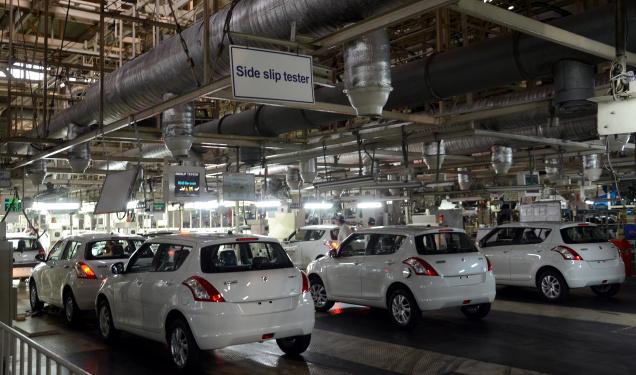 With 2 days to the closure of the month, Maruti announced a price hike that was pending for a long time since competitors had already raised their product prices starting January and Maruti confirmed the pinch due to hike in raw material prices during 3Q. Citing demonetization impact, the company had not found it reasonable to pass on the costs to the customer in November or December. The price hike which comes into effect immediately is in the range of Rs. 1,500/- to Rs. 8,014/- citing the reason “increase in commodity, transportation and administrative costs”. The previous price hike was in August, 2016 when prices were increased in the range of Rs. 1,500/- to Rs. 5,000/- with Baleno price hike by Rs. 10,000/- and Brezza by Rs. 20,000/-.
Maruti also launched the VXi+ variant of its Wagon R a day before the price hike. The WagonR VXi+ comes with Dual Airbags, Anti-Lock braking System with Electronic brake – force distribution system, as optional. 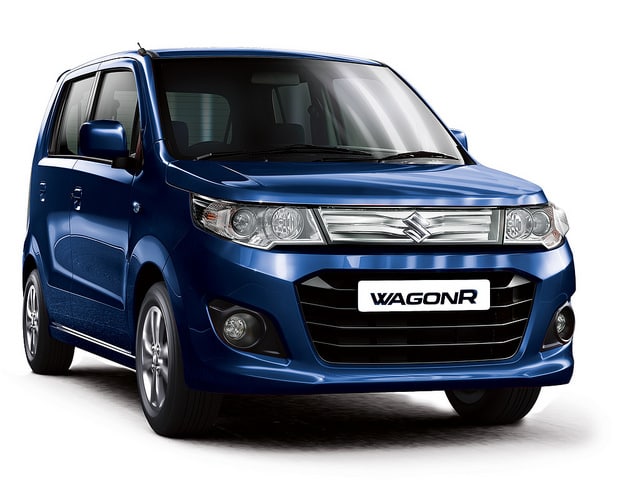 Rumors are also abound that Suzuki will launch the India made Ciaz as they have been recently seen in the Pakistan – mostly in February, 2017. Also due to low demand, Maruti is has discontinued sales of the premium crossover S-Cross in its lower variants. This was confirmed by the company’s spokesperson who said:

In this segment (1.6 litre engine), customers go for highest trim that has all the features. Therefore, it is business prudence to keep the number of variants at an optimum level in line with customers’ requirements. Every brand has a specific role in the overall portfolio. While some are mass models that sell in big numbers, others may not sell as much as a mass model but contribute to the overall brand objectives of the company for the medium and long term. 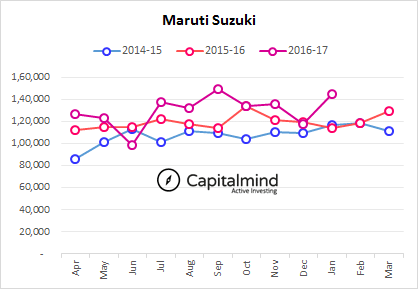 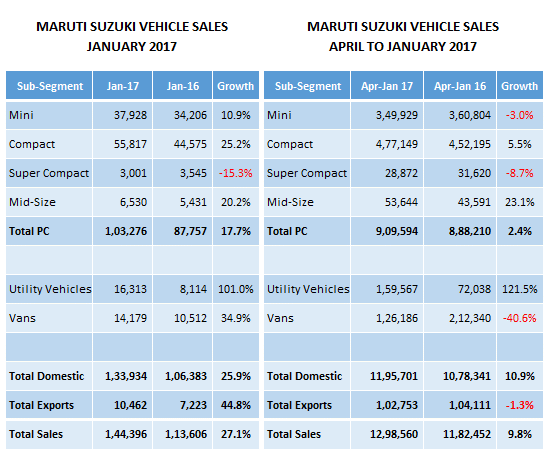 While our regular chart based coverage of Maruti’s Q3 results is awaited (we ourselves are waiting for some numbers from the company), here is a short summary:

Here are the excerpts from the Earnings Call: