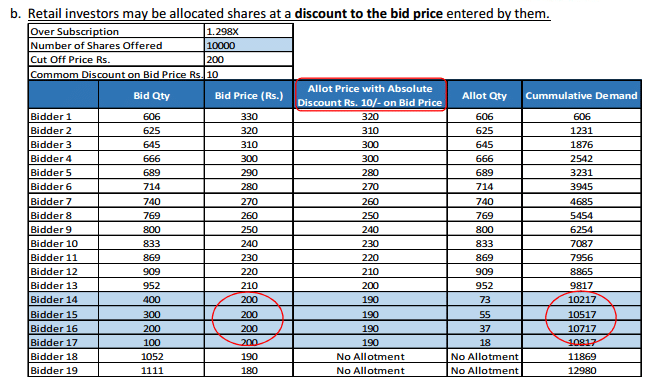 An Offer for Sale (OFS) is when an already listed company wants to sell new shares or its promoters want to decrease their holding in the company and offers for sale to the public.
In the recent past, most Offers for Sale have been from the Government of India which is divesting its stake in Public Sector firms by offering a part of its holding. The last Offer for Sale which closed was from Bharat Electronics Ltd where Government of India proposed to sell up to 1,11,68,139 equity shares.
How do you bid for such shares? Here’s the concept:
The floor price was set at 1498. The floor price is the base price below which they will not accept any bids. But where should you place the order at and at what price would you get allotted?
Unlike an Initial Public Offer where all the applicants get allotted shares at the same price, the case of OFS is slightly different. An OFS can be:

If you are a Retail Investor, you get a 5% discount from the price which applies to you.
A Retail investor is one whose cumulative bid amount doesn’t cross a sum of Rs. 2,00,000. I say cumulative since you can place multiple bids on the same ID. Think of it as placing multiple buy orders at different prices in the normal market. Only those orders where there is a price match will get traded while others get cancelled at the end of the day.
OFS generally follow either of the following two approaches. You can either bid for a price (above the floor) or a bid at “cut off” which is just saying that okay, find the best price people bid at and assume my bid is at that price.

In Single Clearing Price OFS (SCP), after the issue, the issuing company decides on a price which has enough total demand for all the shares on offer and then does a proportional allotment to all investors who fulfill the criteria.
Here is a chart from BSE showcasing how bids are treated and at what price the Investor is allotted shares. 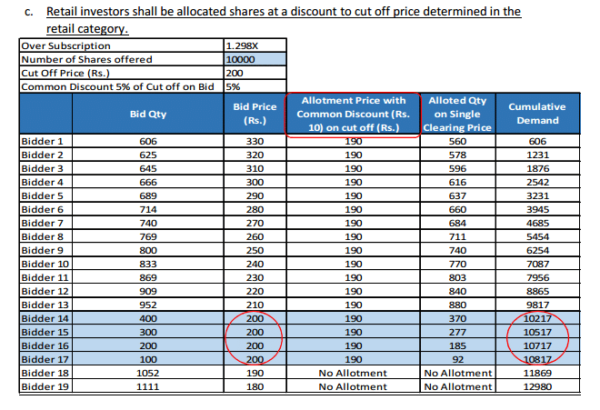 Basically they start with the highest price. Do we have enough investors to satisfy the OFS at this price? If so, that’s our price. If not, then we go one price band lower, and ask the same question – do we have investors at or above this price? They keep going until the answer is yes. The lowest price is the “single” price.
The above grid shows you that 10,000 shares are only available at price 200. Then all shares are sold at a price of Rs. 200. The “cut-off” price is Rs. 200.
As an investor, this is the simplest way given that you can bid at a higher price to assure yourself a allotment while still being sure that if the cut off is at a lower price, it’s the lower price that will apply. But hardly any company issues shares on OFS using this option! (regular IPOs use only this option)
If there’s an OFS using this option, you just bid at cut-off. Everyone gets proportionate shares. So even if they found 10,000 shares being bid at Rs. 200, and another 10,000 shares with bids at “cut off”, they might just say give everyone half the number of shares they bid. That way everyone gets a piece, just a smaller piece than their bid.
(In the example above, the guy who bid for 606 shares at Rs. 330 got allocated only 560 shares but paid Rs. 200 only)

Unlike SCP OFS, the key difference here is that the allotment price is different based on your bid, The priority for your allotment lies in the price you have bid.  Higher the price you bid, the more likely you will get allotment. But you will pay the higher price, even if the cut-off is a lower price.

Most Offers for Sale these days though this methodology. All valid bids are sorted from highest bid to lowest and cumulative demand generated. If demand exceeds supply, then all bids are transacted at the bid price itself. Meaning, if you bid at Rs. 400 even if the OFS demand is fully satisified only at a price of Rs. 200, you will still pay Rs. 400.

The investor will need to anticipate what the cutoff price could be and bid accordingly. If you bid too high, you may get allocated at the high price, but actual stock’s price will be lower in the market, so when you go to sell in the market you might have to take a loss.

But if you bid too low, the cut-off may be higher than your price and you don’t get in. You should look at the book (which is available to see on the NSE and BSE web sites) to see where bids are concentrated, and then make informed bids. 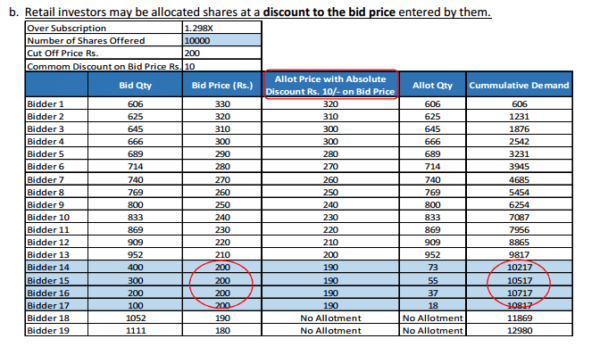 In the above example, assume the OFS was for 15,000 shares. Only 12,980 shares could be allocated in the book (all the way down to Rs. 180).  So that many shares are sold to those investors. So, about 2020 shares are left unallocated. Let’s assume there were about 3,000 shares that were bid at “cut-off”. These cut-off guys will be allocated the shares that weren’t bid at a price, and they will pay Rs. 180 (minus any discounts).
Strategy: Never bid at cut-off in a strongly subscribed issue. Find a price.

Caveat: In an odd case, there might be a situation where retail investors are allocated shares at a discount or at the cut-off price. This is a rare case, but has happened, where non-retail bidders will have multiple-prices, but retail gets a cut-off price. If you find such an OFS, bidding at a higher price is ok and you’ll pay a lower price. However such issues are NOT common anymore.

Good issues generally are oversubscribed and in those cases, those who have bid at cut off will not get any allotment. The saying is: If it’s good, you won’t get it. If it’s bad, you don’t want it.
Bad issues which aren’t fully subscribed will fulfill bids placed at cut off. But the investor is taking a risk since a bad issue means people want to jump off and sell. This could force investors to exit at prices well below the rates at which they were allotted.
Overall, the idea of bidding in an OFS scheme requires a knowledge of: