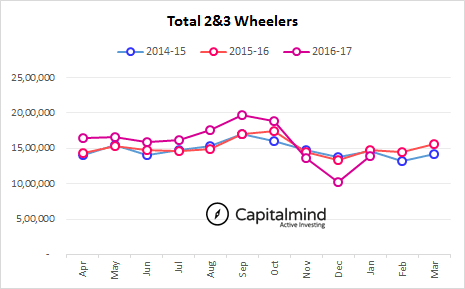 Sales of Two Wheelers and Three Wheelers stood at 13.85 lakh units in January, 2017 against 14.92 lakh units during the same time last year resulting in a contraction of 7.2%. 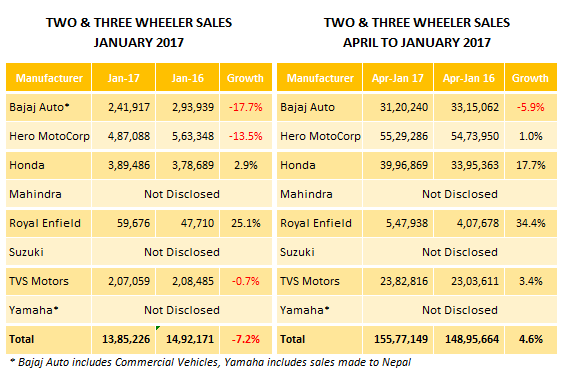 Honda unveiled its Riding Assist technology at CES 2017 – a self-balancing motorcycle through which the company envisions a future where vehicles will communicate with each other and infrastructure to mitigate traffic congestion and eliminate traffic fatalities. 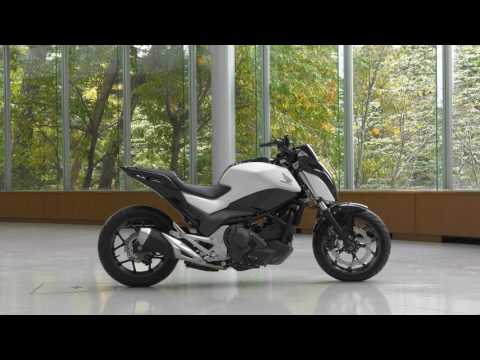 January 2017 saw customer sentiments improving at the onset of festive and marriage season. Growing even when industry declined, Honda has entered 2017 with all time high domestic market share of 29.2%. The impact of demonetisation was felt maximum on rural segment.

Budget 2017 presented today by Finance Minister has firm thrust on rural and agro-economy through farm credit, rural infrastructure, poverty alleviation, road construction and direct taxation benefits. With almost 50% of two-wheeler demand coming from rural and semi-urban India, Budget 2016 should have a positive impact for the industry going forward.

Yet to disclose sales for January.
Suzuki announced the exports of its flagship bike Gixxer to Japan. The first consignment consisted of 720 units.
Mr. Satoshi Uchida, Managing Director, SMIPL said:

It is a very proud moment for all of us as we send off our Indian flagship motorcycle Gixxer to Japan. We are already exporting Gixxer to other countries like Latin America and some surrounding countries. The export of made in India vehicles to Japan denotes the high quality benchmarks established by SMIPL and its expanding global role.

Exporting the Gixxer to Japan would also mean showcasing the advanced technology and superior quality standards within the competitive price range that have been developed by SMIPL in India. We are confident that the Gixxer will be well accepted by Japanese consumer as well.

Yet to disclose sales for January.
Setting huge goals for itself, Yamaha looks to sell over a million units in 2017.  The Indian arms sales for 2016 stood at close to 7.86 lakh units with over 50% coming from scooters alone (Premium Motorcycle sales stands in the range of 8000 – 9000 units per month). This also means that the production capacity at its plants in Chennai, Surajpur and Faridabad.
Roy Kurian, Vice President Sales & Marketing, Yamaha Motor India said:

After demonetisation the sentiments are low, last two budgets have been more focussed on production and infrastructure, this time I expect government to boost the sentiments by announcing incentives in tax structure which will give the consumers a confidence to spend money which is good for the market. 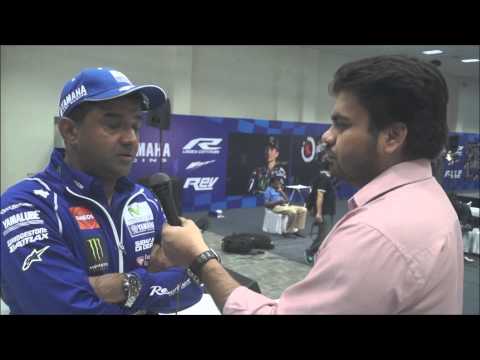 Yamaha also revealed the new R15 V3.0 in Indonesia and launched the FZ25 here in India.
Here are some excerpts from the interview with Yamaha’s Chief Executive Officer, Hiroyuki Yanagi: