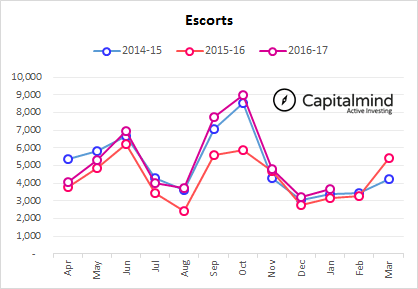 Here is Bharat Madan, CFO, Escorts sharing his views on the current and future demand as well as demonetization impact:

On the occasion of the founder H P Nanda’s 100th birth anniversary, Amitabh Bachchan endorsed the Escort brand. Here is the complete video released by the company.

The aim of the video was to explain how the identity of the family infuses itself in the business itself and also provide insights into the company. Read more here on what the company’s communication officer Sharad Gupta had to say.
Here is what Shenu Agarwal, Chief Sales & Marketing Officer, Escorts Limited mentioned about the impact of demonetization:

The cash crunch impacted demand and tractor sales in the industry dropped around 14% in November. Sales revived to an extent last month. We expect the market to improve and stabilise by the next harvest season. Monsoon has been good this fiscal, sowing has gone up and prices are holding well. Despite demonetisation, the industry should grow 18-19%.