The largest pigment producer in India with a 35% market share reported 4.09% growth in Net Revenue with Profits plunging 7.53% from Rs. 13.15 crore to Rs. 12.16 crore. The company also announced a dividend of Rs. 2/- per share with the 24th February, 2017 considered as the record date to be paid before the 11th March, 2017.
The management blamed the drop in sales as an effect of demonetization while slower demand was blamed for fall in exports.

Here is what the management said in the earnings call:

The stock has jumped to nearly 300, and we’ve entered at around 100, which is a decent return in two years. Results indicate that the best may still be ahead of us.

The chemical arm of the Tata Group with interests in businesses that focus on LIFE —Living, Industrial and Farm Essentials reported consolidated Revenue of Rs. 3,495 crore generating a PAT of Rs. 264 crore.

This quarter registered good performance across businesses in India, as well as other geographies, in spite of challenges faced on several fronts.

The recent products launched under the umbrella brand of Tata Sampann have also received a very encouraging response and are being made available across regions in the country. However, there has been a short term impact on performance post the government intervention on capping prices of pulses.

Here is what Vayu Garware, CMD had to comment:

The third quarter performance was good in light of a downturn in domestic demand due to demonetization. However, the team was able to counteract this through a good growth in export sales and improved mix of our value added products in the overall product basket. With signs of domestic demand picking up and coupled with a strong export order pipeline, we should see the company continuing its past growth trend.

Reporting a -8.3% drop in domestic automotive sales during the third quarter while witnessing a positive growth of 2.1% in export sales, M&M cited the demonetization effectas the reason for the bad quarter.
However, its Farm Equipment division fared better with a 21% growth in volumes leading to the company’s highest ever market share at 44%. Even exports of Farm Equipments went up 43.1% in Q3 at 4,123 units from 2,881 units. Consolidated Revenue stood at Rs. 11,826 crore generating a Profit of Rs. 801 crore.
Here is what the company said in its press release:

The auto industry was adversely impacted in Q3 F2017 due to demonetization with all segments of the industry showing significant drop in demand in the months of November and December 2016. This was in contrast to the overall positive sentiment and demand that prevailed in the period April to October 2016.

Industry growth for Cars + UVs dropped to just 1.1% in the months of November and December as against 11.4% for the period April to October. This sudden drop in demand had an adverse impact on the Q3 F2017 industry volumes which de-grew by 1.4%. The festive season in October helped in boosting demand for tractors but overall Q3 saw some pressure on volumes because of demonetization.

The Rabi sowing this year has exceeded the overall sown area from previous year and there is also an increase of 10% and 14-16% respectively in MSP of oilseeds and pulses. This together with continued rural thrust in the union budget will bring some cheer to the farming community.

They have something new coming up in the Jun 2017 quarter – a plant in Mexico that intends to serve the US, Mexico and Brazil. There could be a Trump impact to this, but we aren’t sure yet. There’s also a new plant and expansion of an existing in Hungary for door panels and bumpers, targeted for the March 2017 quarter. India’s Sanand plant for wiring harnesses comes online in the same quarter.
MSSL Chairman Vivek Chaand Sehgal said
The company has shown exemplary growth in all areas and has achieved highest ever revenues and margins in a quarter. This is the reflection of hard work put in by all our teams from around the world.
Here is what the management said in the earnings call: 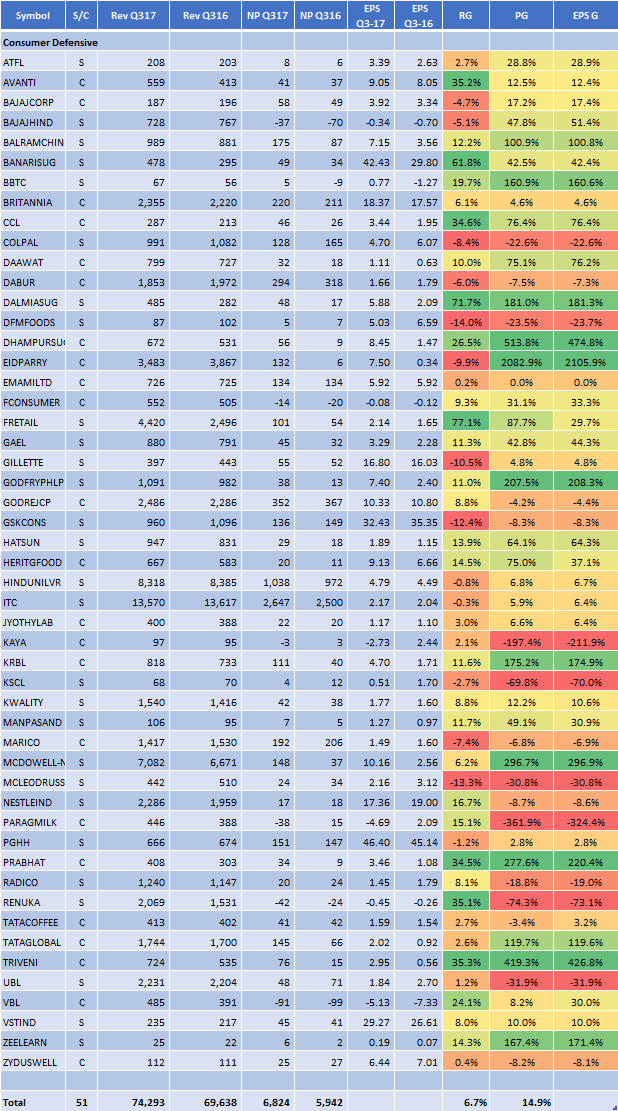 The world’s largest tea growing company reported a PAT of Rs. 23.62 crore against Rs. 34.14 crore in Q3FY16. The company also received Rs. 15.04 crore (Rs. 35.90 crore was the total other income earned in Q3) from the Government of Assam towards compensation for land acquired from the company.

Here is a short summary from PMFs call on demonetization held on 28-November:

Tata Coffee continued its strong performance in the instant coffee business with a 11% increase in Standalone Revenue of Rs. 189 crore from Rs. 170 crore resulting in a Profit of Rs. 28 crore.

Here is what Sanjiv Sarin, Managing Director of Tata Coffee had to say:

We will have to carefully observe coffee prices and Indian coffee production due to monsoon deficit. Also the company is setting up a freeze dried coffee plant in Vietnam to further strengthen its global foot print in the premium instant coffee segment.

Note that coffee prices are continuing to hit multi-year highs internationally. However, pepper prices have come down somewhat, in the south. 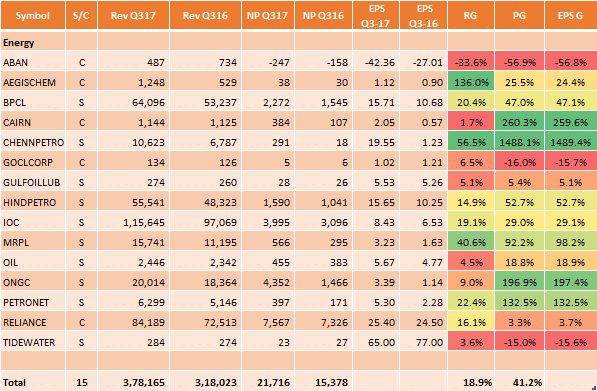 In summary, management expects Q4 to be driven by LPG growth in volumes, major projects coming on stream will be a big boost for generating revenues in FY2018. 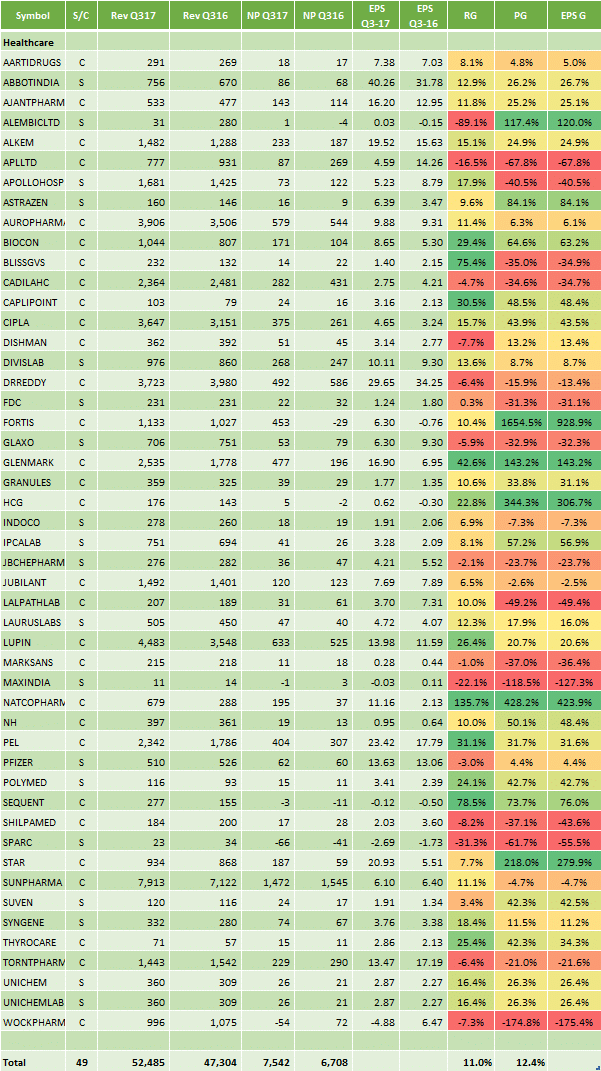 You can catch the Q3 results here. In addition captured below are the activities that took place at the company between Q2 and Q3 results:

With no clear visibility over the Halol plant clearance from the FDA, the management team confirmed that they are still “implementing corrective steps” and are hopeful the problems can be resolved over the next few quarters (we will have more on this once the transcript of the earnings call is made available). You can catch our earlier detailed coverage of the Halol issues here:
Tracking The Sun Pharma Halol Plant US FDA Inspection
Exclusive: We Reveal The Observations Made By US FDA’s Inspection Of Sun Pharma’s Halol Facility
Here is how the company performed in Q3:

While we continue to focus on growing our existing business, we are happy to invest our strong cash flows in enhancing our specialty pipeline, though currently without commensurate revenue streams.

During the quarter, we commercialized BromSite, our first specialty ophthalmology product in the US. Post the close of the quarter, Ocular Technologies, a company which we had recently acquired, announced positive results for Seciera Phase-3 trials demonstrating a rapid onset of action at 12 weeks of treatment for dry eye disease.

We also made an announcement for acquiring Odomzo, a branded oncology product indicated for the treatment of adult patients with locally advanced basal cell carcinoma, a type of skin cancer. Odomzo is approved in 30 markets including the US, Europe and Australia.

Here are the activities that took place at Sun Pharmaceutical Industries between Q2 and Q3 results:

Acquisition of 85.1% of JSC Biosintez, a Russian pharmaceutical company. The transaction is expected to be completed by end of 2016 and is subject to approval of the Russian Federal Anti-Monopoly Service and other closing conditions.

Launches first branded ophthalmic product, BromSite™ in USA. The product will be marketed by Sun Ophthalmics – a subsidiary of Sun Pharmaceutical Industries.

The company mentioned that the drop in sales was attributed to a conscious decision to reduce exposure to low margin business including stand-alone transportation. PAT was down mostly on account of higher interest and depreciation.
Snowman is also setting up a temperature controlled warehouse at an investment of Rs. 30 crore. While the first phase will involve 5,000 pallet positions, eventually this can be expanded to 10,000 pallets.
This is what the Chairman, Prem Kishan Gupta said:

While sales and EBIDTA improved QoQ, the company under performed as compared to the corresponding period of last year. The market scenario last quarter for the industry has been a challenging one with several of the dependent industries reporting drop in business. However, we see this as a temporary phenomenon as signs of recovery are already visible in the current quarter. 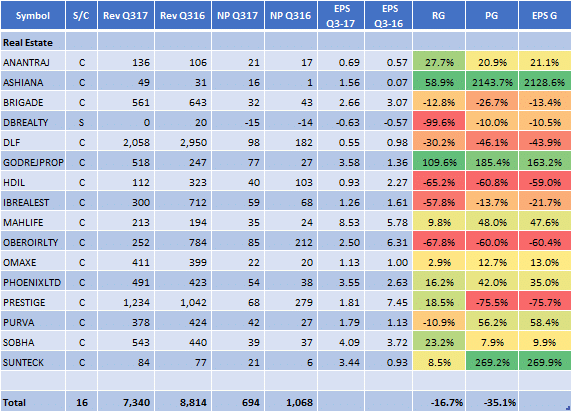 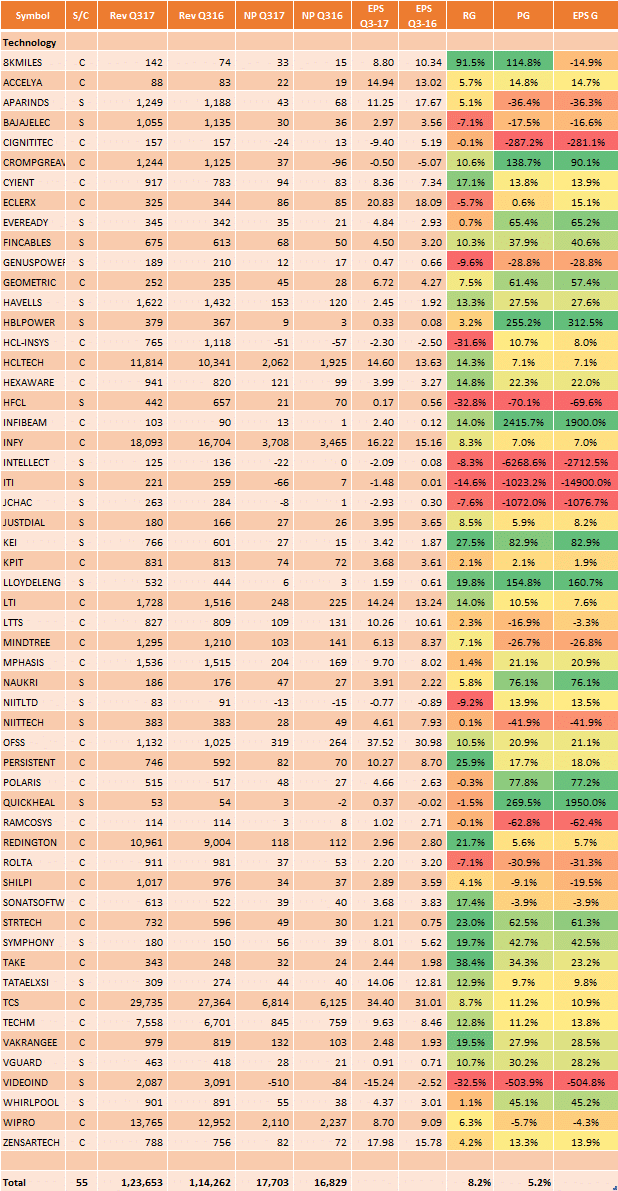 Declaring an interim dividend of Rs. 2/- per share, Redington reported a strong sales performance both domestically and in international markets. The company witnessed a 22% jump in consolidated revenue at Rs. 10,960 crore which resulted in a PAT of Rs. 118 crore against Rs. 111.9 crore during the same time last year.

Here is what the management said in the earnings call: 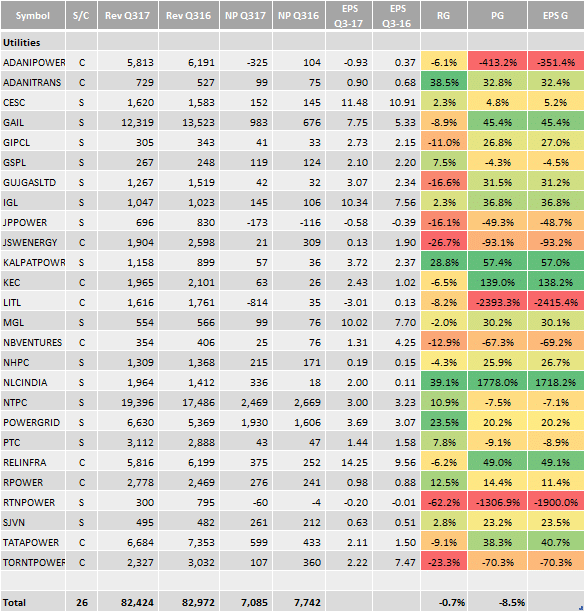 • All figures in Rupees Crore except EPS

• EPS = Earnings Per Share (Adjusted for Bonuses and Splits)

• If we have published an incorrect data set here, do let let us know.

• Where earnings go from profit to loss or vice versa, things go a little crazy with the profit and EPS growth percentages. Please ignore them.