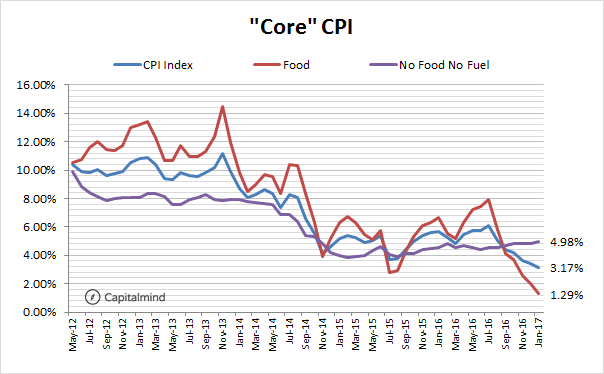 The RBI was right in worrying about core (“non-food, non-fuel”) inflation. The worry is that this number is rising, and it’s come about as the highest since October 2014, more than two years ago.

Core inflation is sticky. Think of food inflation as the price of onions and paneer, and core inflation as the price of a paneer masala dish in a restaurant. The former will keep fluctuating in price and even if it went up, the restaurant might not increase his dish prices because they might go down. It’s after a sustained upmove that the restaurant will increase the cost of the dish, and then, it doesn’t go down easily.
Core inflation is sticky. It moves slowly, and reversing it takes a lot of longer term effort.
However, CPI headline inflation is at a multi year low. (Because of low food inflation, and food is 50% of the index) 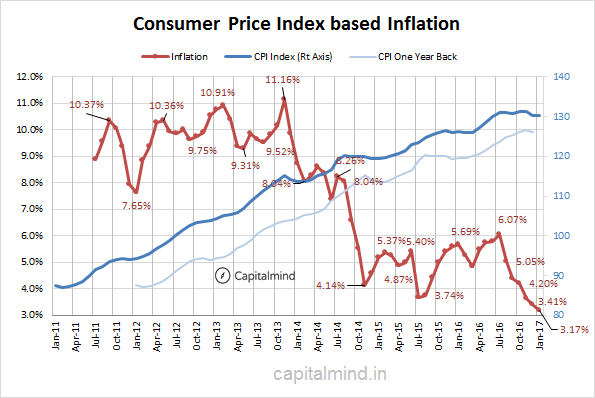 The components show you how skewed it is. While inflation in food is less than 2%, we are seeing a rising trend in fuel, Education and Transport. Housing costs will increase on April 1 when the adjustment for higher rents of government employees (due to the pay commission changes) will take shape.
Cost of clothing, Household items and Personal care are still subdued. Our View: Rate cycle will see a turn

If core inflation keeps going up, the RBI might have to consider raising rates. Much about the demonetization process is inflationary too, because much more money can now be created by banks. If lending suddenly starts increasing, then we might see the easy money cause inflation – this is what the US and European easing has wanted to do (push money so that inflation can increase). India however is a different beast with a problem of too much inflation, not too little. So the RBI is more likely to want to control inflation than to let it go.
The new 10 year bond is at 6.86%, the highest yield in a few months. Rates are firming up even for corporate borrowings. This inflation data might look good on the headline numbers, but the internals tell us a different story altogether.