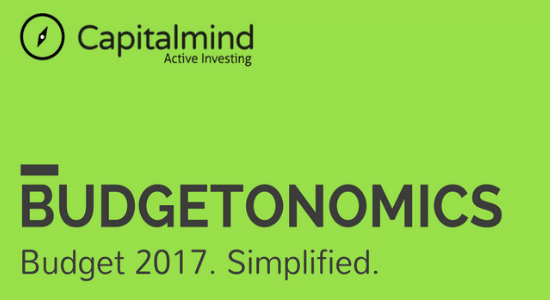 Our annual budget book, Budgetnomics is here! In there are all the posts we have written on Budget 2017. Links below!

Our View: Balanced but Boring

It was a budget you won’t remember. Nothing much really happened, other than the lower slab coming down to 5% and some new taxes on higher slabs. On the government expenditure front, there’s some focus on irrigation and rural development, but nothing much for most other places including defence.
What was attractive was that they didn’t do certain things people thought they might do. They didn’t introduce a cash transaction tax for banking. So you can still use cash without a penalty, except with certain limits now.
They didn’t introduce a long term capital gains tax for equities, but they did change the law so that such a tax will come back for a few people.
Markets have cheered the budget. And markets are doing their own thing, regardless of any macro overhang – we have low credit growth, still subdued profit growth and a change in global macro expectations of interest rates and policy, and yet, markets don’t think this is a problem. The thumbs up they have given the budget might well be the market ignoring negative factors as it’s prone to do in a euphoric period.
The boring nature of the budget is that it’s without a strong direction. While business growth has been slowing, the government isn’t making a push to increase spending dramatically – just a 6% increase.
However, this budget points to one thing: That big spending decisions might have to come along the way, rather than at a budget many months in advance. The dynamic nature of life means that things will change rapidly, and even more in this connected world. To wait till the budget, or to have to predict at budget time, is a convenience we can hardly afford.
Even if the budget gets less relevant, it will still be where tax changes come across and thus, always be a source of interest. This time, tax changes were the only thing that mattered. And the rest of the budget looks good on paper. Let’s hope reality doesn’t change things for the worse.
Every year as part of the Budget exercise, we release a book called Budgetonomics – It’s about the What, the Why, the How of the Budget. We hope you enjoy reading it.
This book is free for all readers on Capitalmind. Click here to download Budgetonomics 2016.