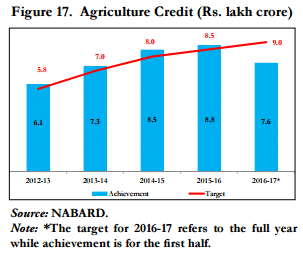 Agriculture has always been the priority of most governments and there isn’t much change in Budget 2017. Budget has come up with various initiatives for farmers as well as agriculture and allied activities. The allocation for Rural, Agriculture and allied Sector in 2017-18 is at 1,87,223 Crs which amounts to an increase of 24% in budgetary allocation!. Lets take a look at they key numbers.

Agriculture credit saw an 11% increase in its allocation. Last year, the allocation stood at Rs 9 lakh Cr, out of which 7.6 lakh Cr has already been achieved (For H1FY17). Historically credit lending to agriculture has exceeded its allocation every year. Considering the previous years data, the lending for current year might reach at 9.5 lakh Cr.

The new Rs 10 lakh Cr is not a big thing for the next year. It just follows the previous years trend line.
Computerization and Integration of 63,000 credit societies will take place with core banking system and co-operative banks. This will be a 3 year process supported by Rs 1900 Cr funding.

Well this is the one to reckon with. Though announced way back in Dec 2016. This still makes a point that the government is trying to compensate the demonetization trouble the farmers have taken by waiving off 60 day interest. This is valid for all the loans taken in the rabi season in co-operative banks.
The government has said 40% of the agricultural loans are via co-operative banks. So the farmer community is bit relieved with interest payments. Though farmers need to pay the full interest first and later the 2 months interest will be credited back to their account.

Government has allocated Rs 5500 Crs in 2016-17 covering 30% of the cropped area. The estimates have been revised to Rs 13,240 Cr. to settle the arrears claim. The Fasal Bhima Yojana will be covering 40% of cropped area for 2017-18. Current allocation under Fasal Bhima Yojana is at Rs 9000 Cr, an increase of almost 47% in budgetary allocation compared to last year. The coverage area will be scaled up to 50% in 2018-19.
The sum insured for Kharif crop will go up from 69,000 Cr in Kharif 2015 to Rs 1,41,625 Crs in Kharif 2016. What we don’t know is how far this scheme has been successful given that not much data is available to analyse. Also unknown is data on how much farmers have been paid in case of crop failures.

Yield per Acre in India is pretty low with one big cause being plantation of crops that aren’t suitable for the soil. In an attempt to boost productivity and boost production, government has come up with soil health card for farmers. Every farmers will be given soil health card which will contain the nutritional content of soil. This helps in selecting crop and manure type for the farmland.
To support this initiative, government is proposing to set 648 soil testing centres  at Krishi Vigyan Kendra. Apart from this, their will be 1000 more centers funded by small entrepreneurs for soil testing.
To increase the productive use of water, government is trying to increase the irrigated land. Under this scheme the government has allotted Rs 40,000 Crs. An upside allocation of 100% more compared to last year. Also a micro irrigation  fund of Rs 5000 Crs has been set aside.

Online Integration of APMCs via e-NAM And Dairy Processing Units

As a pilot project, government had introduced the online agricultural produce trading platform at 250 APMCs (Agricutural Produce Market Committee). Now this has been expanded to 585 APMCs. In addition, Rs 75 lakh  will be provided to every e-NAM for cleaning, grading  and packaging facilities.
Assuming every district requires an APMC, 585 APMC will still be a minute part of the Indian markets and Rs 75 lakh is a very negligible amount allocated for an individual e-NAM, taking into account the quantity of produce sold via individual facility.
Dairy industry will get a infrastructure boost in terms of diary processing. NABARD will be setting up a corpus of Rs 8000 Crs over three years to promote enhance diary processing in the country. The scheme will start with initial funding of Rs 2000 Crs.
Rashtriya Chemicals and National Fertilizers have increased their internal and extra budgetary resources (IEBR) to Rs 2042 Cr and 872 Cr respectively. An increase in of 15.69% for RCF and 185% for NFL compared to revised 2016-17 revised estimates.
Note: IEBR is part of the Central plan of the Government of India and constitutes the resources raised by the PSUs through profits, loans and equity.