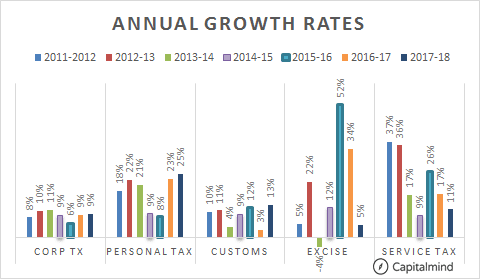 The budget threw up some interesting changes this time. Firstly, here’s how the revenues of the government look next year: We have total revenues of the government go up by about 10% in the year ahead. Tax expectations are highest from individuals as personal tax – the estimated growth is 25%. Plus, Excise duty is only expected to see a 5% growth, while Service tax is just increasing by 11%.

And the fiscal deficit remains roughly the same absolute amount, with a 2% increase from last year. 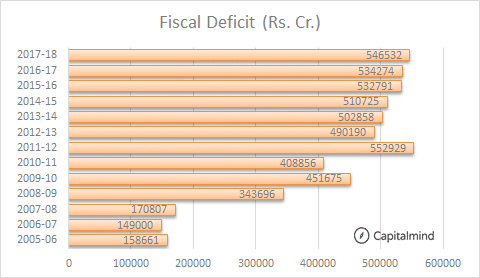 The bond markets didn’t really believe the speech, because bond yields went up (and prices went down) after the speech. The point is that the borrowing for funding the deficit remains the same even through the fiscal deficit looks lower (3.2% of GDP, and lower in percentage terms because GDP is expected to be up 12%).

Total expenditure is up just 6%. This sounds very strangely low because that’s mostly inflation plus a little bit here and there. What’s the deal? 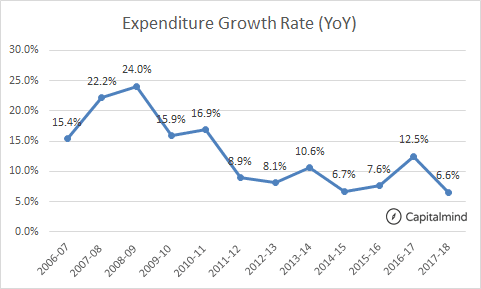 For one, the government has cut the recapitalization of PSU Banks to Rs. 10,000 cr. (from 25,000 cr.) In a year when NPAs are likely to peak, and many PSU banks have 20% Gross NPAs, we find this surprising. Undoubtedly this figure will need an upward revision; even if such banks merge, they will need large capital infusions.
State share of taxes grows only 10.5%. This is strange, because they expect tax collection to be up 12%+. Are they going to reduce the amount shared with states, even marginally?
Disinvestment is up from Rs. 45,500 cr. to Rs. 72,500 cr. This involves a strategic disinvestment of Rs. 15,000 cr. which might come through selling shares of BEML.
There’s no consideration for changes with GST. Many states want full compensation of their losses, and while the government thinks it will not lose revenue, we believe that this will surprise us later.

A budget in Feb for April to March of next year is tough to adhere to, because too many things can happen. Government expenditure will need to change and perhaps we’ll see very different revised estimates and actual spends. New concepts such as a guaranteed pension scheme, farmer loan interest subsidies etc. were announced in this budget, but they were already introduced in the previous year.
Things will change, and we should expect to be more dynamic. Much of what happens in the next year will be determined by events on the ground. A changing monsoon, change in crude prices, rise in global interest rates or a protectionist trade regime abroad will alter these numbers substantially.
For now, though, it’s a smart budget on paper. We expect that the metrics on total borrowing and expenditure will go up. Watch the RBI meet on Feb 8 for the next trigger. 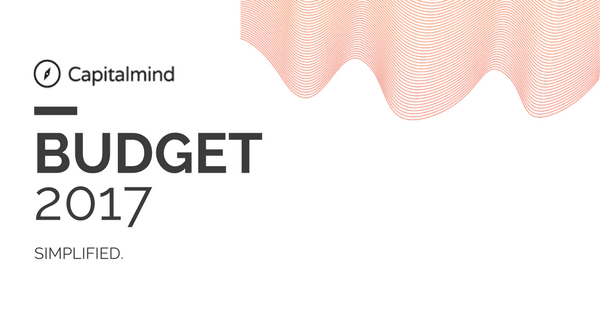