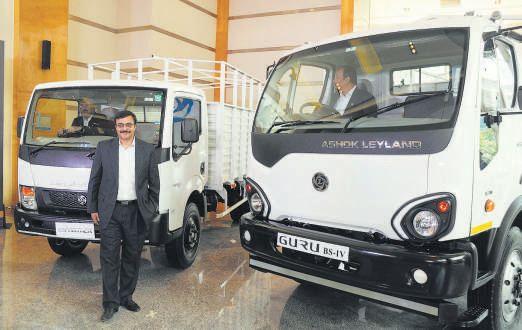 Following other auto makers but in a delayed mode, AL announced a price hike of Rs. 60,000 to Rs. 1.25 lakh during the first week of January. This was followed by another positive for the company as its Managing Director Vinod Dasari earned the title “Autocar Professional’s Man of the Year 2016”. Here are some excerpts from an interview following the news:

We identified six regions in the world, which were India-like in terms of road conditions, load conditions and which are also growing. They are SAARC, ASEAN, Middle East, Africa, Latin America and CIS. The second step of the strategy was how we compete in these markets. Today about half of our bus sales happen outside India, not many don’t know that. The entire BRT system in Lagos is run by Ashok Leyland. Ninety-five percent of the buses are Sri Lanka are Ashok Leyland buses. So we first enter (a market) with buses.

10% to 15% currently which we want to move to about 25-30% in another 4-5 years.
AL inaugurated a new outlet in the Eastern India at Dimapur – a facility spread over 30,000 sq. ft. The facility has been placed strategically at 7th Mile on Asian Highway 1 and will cater to all the vehicles of Dimapur, Kohima, and other floating population.
Here is what R. Nagarajan, Vice President-Global Service, Ashok Leyland said:

Nagaland is a very important market for us and we are very pleased to inaugurate this facility in the state. With this new outlet, we look forward to increase our market share in the North East region from the existing 21%. The major drivers of economy in the region are road construction, agriculture, tourism, and trading. We are confident that this new outlet will further strengthen our strategic presence in Nagaland. On new commercial vehicle launches, AL launched the ‘GURU’- the latest Intermediate Commercial Vehicle (ICV) and the ‘PARTNER’ – a modified and completely home-built 3-litre engine vehicle with improved fuel efficiency and ALs air-conditioned LCV goods vehicle. Also launched was ‘GURU’ (BS-III and BS-IV variants) to address its weaker presence in the Intermediate Commercial Vehicle segment. AL is looking at close to 10,000 annual unit sales for both these trucks combined and ICV is one of the key focus areas for the company as it looks increase its market share in this segment.
Here is what Vinod Dasari, Managing Director said:

We want to get to a position where we will have a 30% market share across segments in the industry. We are targeting an export ratio like one export for every two domestic sales. With these launches, we have strengthened our position in the market and are closer to our vision of emerging as one of the top 10 truck makers, globally, by significantly increasing the market share in ICV and LCV segments.

The new launches address the two segments between 5-tonne and 12-tonne range where we were weak. Guru has been developed in 18 months as against a normal time frame of three-four years.

AL is also planning to incorporate a left-hand drive for this newly launched model and pitch it for exports to Africa and West Asia. For now it is looking to export the left hand drive units to Gulf Cooperation Council (GCC).
All these new launches come after the company divorced its partner Nissan and has decided to widen its product range. Now it is working on the new strategy which involves reviving two brands that we due to be launched this year. Here are the details shared by Nitin Seth, President (LCV & Defence), Ashok Leyland:

On the Bharat Stage-IV emission norms set to kick in from April 1, 2017 – ALs Anuj Kathuria who heads the trucks division is banking on pre-buying in Q4 since vehicle prices are set to rise from April, 2017. Here is what he said:

ALs finance arm – Hinduja Leyland Finance was in the news as it raised Rs. 250 crore via a Right issue. The investors including Hinduja group entities and private equity investor Everstone Capital. The reason cited behind this fundraising was due to the delay in the IPO process along with the demonetization effect
The rights issue was necessitated because of a delay in the company’s initial public offering (IPO) of Rs. 700 crore in view of the impact of the government’s move to replace high denomination currency notes.
AL also released its third quarter results on the 25-Jan-17 which stood as follows:

Q3 has been quite challenging, for the industry, primarily due to the steep increase in material cost. Demonetisation had an impact but the Industry is recovering from it. Despite these challenges we have maintained healthy operating margins. Pre-buy in Q4 owing to BS-IV implementation in FY 2017-18 along with our recent introductions in the ICV segment – Guru (Truck) & Sunshine (Bus) and LCV segment – Partner (Truck) and MiTR (Bus) expected to have a very positive impact on our volumes in the current quarter.

Here are the some of the points from the earnings call:

ALs Bangladesh partner – Ifad Motors will soon start off its assembling plant at Dhamrai which will has a capacity of 10,000 vehicles per year. Here is what the Managing Director of Ifad Autos Taskeen Ahmed said:

The plant will assemble around 7,000 trucks of various ranges as well as around 3,000 buses each year, making it the largest commercial vehicle assembling plant in Bangladesh. In addition, we will also build around 3,000 truck and bus bodies from the same facilities each year.

Assembling these vehicles locally will reduce the burden of import tax and other expenditures which will enables us to sell the Ashok Leyland vehicles at around 15% less price. Local assembling will also enable us to use locally produced automobile components which, in the long term, will help to flourish the domestic manufacturing of various auto part.

Our target is to grab the bulk of the market for medium and heavy commercial vehicles of the country within the next four years. Currently, the body building segment for buses and trucks in the country are run in a very unstructured manner. This also increases the risk of road accidents due to poor compliance and quality assurance.