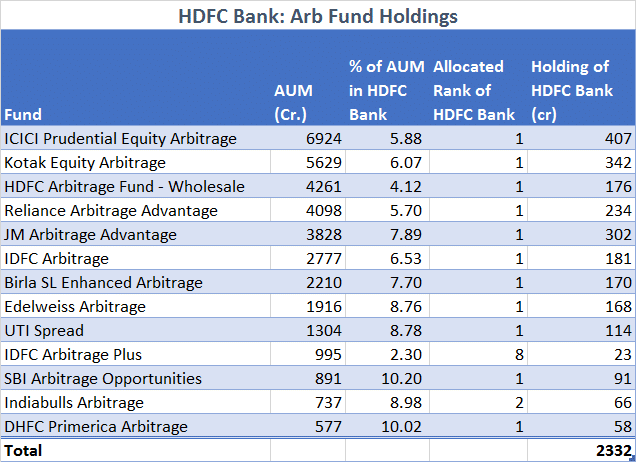 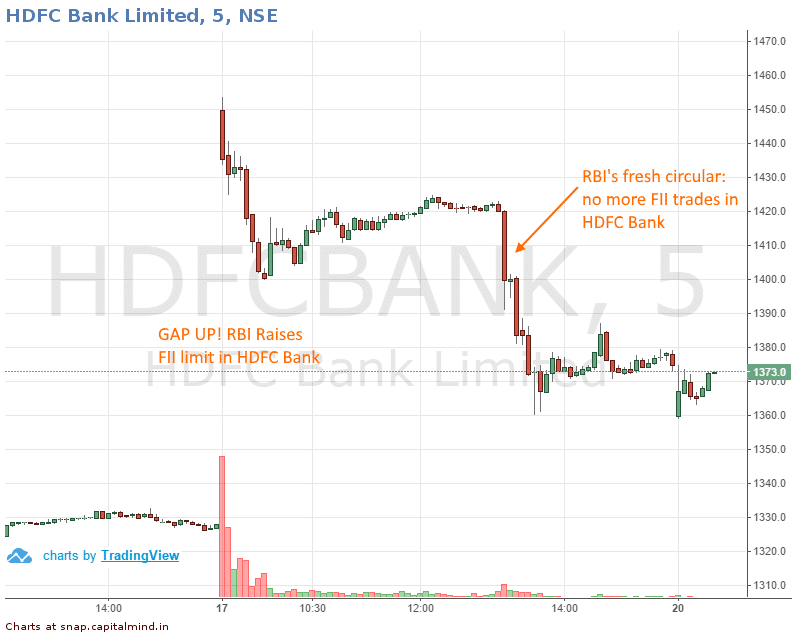 Why did this happen?

Who Gets Hit? Brokers and Arb Funds?

One thing that was constant all day was that HDFC Bank Futures traded consistently about 2%-3% lower than the stock. That is a huge advantage to arbitrage funds – who typically buy a stock and sell the future and try to lock in the difference.
In such a situation the stock traded higher than the future, so any open positions (long stock/ short future) could be reversed at a reasonably big profit!
And HDFC Bank is a super favourite among arb funds. Here are all the arb funds with over Rs. 500 cr. in AUM (as of Jan 31) and their holdings of HDFC Bank. They hold over Rs. 2300 cr of the stock:

It’s the top holding of most funds, and some hold over 10% of their AUM in that one stock. They also have to sell futures of equivalent amounts, so that the arb is maintained.
We don’t know right now, but it’s quite likely the arb has been unwound on Friday. (Who wouldn’t?) So the arb funds would have sold the stock and bought back the future. It’s figured in their NAV’s too – most arb funds made over 0.15% on Friday alone, which is a massive return for one day.
Any impact of a reversal or a lack of a settlement can mean multiple things:
Brokers may have to settle on their own. Meaning, they sell the purchased shares when delivered, and if there’s any loss, the FIIs must pay. This is probably optimal.
Exchanges may cancel the excess trades. Arb funds and other arb based sellers will need to figure out what to do with the positions now that they still own the stock but don’t have a corresponding offsetting future. This is what would happen if the seller was you or me, because we can’t do anything. However this time the other side is also big institutions, so this isn’t as likely to happen.
The Excess shares sold can be put into a pool that is sold over time, with loss guarantees by the FIIs or such. This requires some institutional support, and is super unlikely.
The impact of this will be known after the decision by custodians and exchanges. But such things shouldn’t happen in a seamless market. RBI rules should be clearly to require, say, hourly monitoring or such. And because this time was so ad-hoc, they should just make this a learning experience, and not do things like cancel settlements.