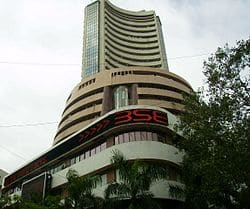 Bombay Stock Exchange is the oldest stock exchange not just in India but in Asia as well having been established in 1875. It’s also the exchange with the world’s largest number of listed companies and India’s largest when it comes to total market capitalization.
A few updates have been made with respect to the figures and some elements after discussions online.
While today most people don’t remember much less care about regional stock exchanges, India for a long time had a large number of exchanges (generally one or two per state) totaling more than 30. Post the arrival of NSE and the 2000 crash, most exchanges other than Mumbai closed down operations and instead launched subsidiary companies which took membership of the two exchanges that survived – the Bombay Stock Exchange and the National Stock Exchange. While Calcutta and Delhi continued to trade, the volumes became minuscule over time.
Stock Exchanges in India for long were owned by brokers with the only exception being the National Stock Exchange (NSE) which was incorporated in 1992 as a Corporate Body. This conflict of both being the owner as well as the player was finally ended by SEBI when it forced the stock exchanges to corporatize themselves and sell shares to ensure that a minimum of 51% of the exchange was held by the public shareholders.
Bombay Stock Exchange completed its demutualization in May of 2007. Among the buyers were Deutsche Boerse and Singapore Exchange. While Deutsche Boerse continues to hold onto the stake, Singapore Stock Exchange is one among the sellers in the IPO.

Digging In: The IPO

But as an investor, should we apply to the BSE IPO? Let’s find out by digging into the Prospectus and see if it makes sense.
The IPO is open between 23rd and 25th Jan 2017, for Rs. 805-806 per share. Only existing shareholders are selling, and there are a total of 5.3 crore shares that will exist after the IPO, valuing the BSE at about Rs. 4,200 cr.
Bombay Stock Exchange derives its Income from 4 major heads – Securities Services, Income from Investments and Deposits, Services to Corporate’s and Data Dissemination Fees. 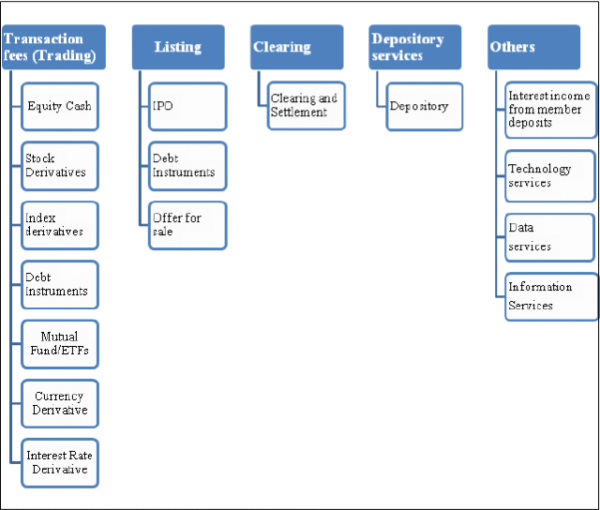 Securities Services is primarily income generated by charging brokers a fee for transactions that are carried out through the exchange. With it contributing nearly 39% of the revenue for last year, it’s important that volumes of the exchange keep growing. But as the chart below showcases, volumes are trending lower and this in a market which has been bullish for the last couple of years.
Income from Investments and Deposits contributes a major chunk to BSE’s Net Income but given the fall in interest rates, the results become a bit oversensitive to any falls in yield which cannot be easily replaced by other income streams.
The third highest revenue generator is Services to Corporates, which primarily consists of listing income. Given the huge number of listed stocks, this has been pretty substantial. And finally we have Income from selling of Data feeds / services coming in pretty low at 4%.
The arrival of National Stock Exchange spelled the doom of regional stocks exchanges over the next decade. The only survivor was Bombay Stock Exchange thanks to Mumbai being the financial hub as well as the network affect it had created over the years.
Over the last 16 years, net of deletions, BSE has seen an addition of just 110 securities. For now, BSE still is an exchange almost all new companies coming up with a public offer hope to list though going forward this could change.
While NSE has literally monopolized the Equity Derivative Market, in Currency Derivatives, BSE despite its late launch still remains a player with a market share of 37% as of January 2017. While the amount of trading in Corporate Debt has risen, BSE still has a very small market share with the majority being garnered by National Stock Exchange.
All in all, while not yet a fringe player, BSE has let go of its humongous advantage and brand equity that has been build up over a century.

Take a look at the chart below showcasing the market share in the Equity segment of the exchange. BSE has been losing market share with the trend steadily and clearly heading lower. 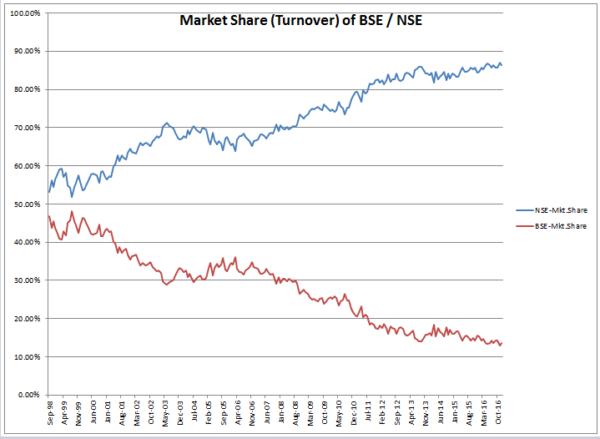 Despite the overall growth in Indian Economy and the growth of Turnover / Market Capitalization, BSE is at the same level as it was a decade back

The consolidated numbers are nothing to write about with the EPS going through a slow but steady decline even as the Income from Corporate Services has increased tremendously over the last couple of years.
Even revenues are flat in FY 2016, and we only have three months of FY2017 which isn’t worthy of a comment. Even Profits are flat at around 122 cr. in FY 2016. FY2017 looks better but the numbers seem like an aggressive jump, typical of a time before an IPO.

With lower interest rates, we are already seeing pressure on Income from Investments which could continue for the near future. (Income from investments was at 189 cr. in FY2016, about 28% of a total revenue of 658 cr.)
The only other listed exchange on the Indian Markets is MCX which came out with a Public Issue in 2012. While the NSEL / FT issue was a big dampener on sentiments. The issue was sold at a price of 1032 per share and as of today trades at 1200. Not a great return given the 4 year time span that has been spent.
Currently MCX sells for around 45.60 times its last four quarter earnings.
BSE is expecting  at the upper end of the range to sell at 37.90 times based on FY16 PE earnings and 28 times based on FY17 Annualized EPS .
There’s also investments on the balance sheet of around 1000 cr. (quoted) and about 300 cr. in a subsidiary (ICCL) which is unquoted. Considering the IPO is at a valuation of Rs. 4300 cr. and if we eliminate the investments and a potential valuation of Rs. 450 cr. for CDSL, we get a value of Rs. 2500 cr. for a Rs. 100 cr. profit (post CDSL divestment) or a 25 P/E on a business that’s hardly growing.
The good part about exchanges is their high return on equity or capital employed, since they are supposed to have a captive business. BSE has about 2550 cr. in shareholder equity, and makes around 122 cr. per year – which is just 5% ROE.  Again, not very exciting.
Finally, unlike most IPO’s where companies raise cash for business / expansion purposes, here it’s the existing shareholders who are selling out.

Our View: Not That Exciting

BSE is a waning exchange and has been losing marketshare steadily over the years. With volumes being stagnant and derivatives almost non-existent, the exchange is in an obvious second place to the mighty NSE. If you wanted to bet on an exchange then the NSE is likely to be a better bet, as a business that is debt free and cash flow generating.
Update: a short term kicker might be in the offing with the sale of CDSL shares, and some of it might be paid out as a dividend. But this is a one timer.
While the Exchange shall continue to exist for the foreseeable future. from an investing point of view given the bleak prospects, we would rather wait for the National Stock Exchange IPO to hit the market.
(Thanks to Nitin from Alphaideas for pointing us to the CDSL extras)