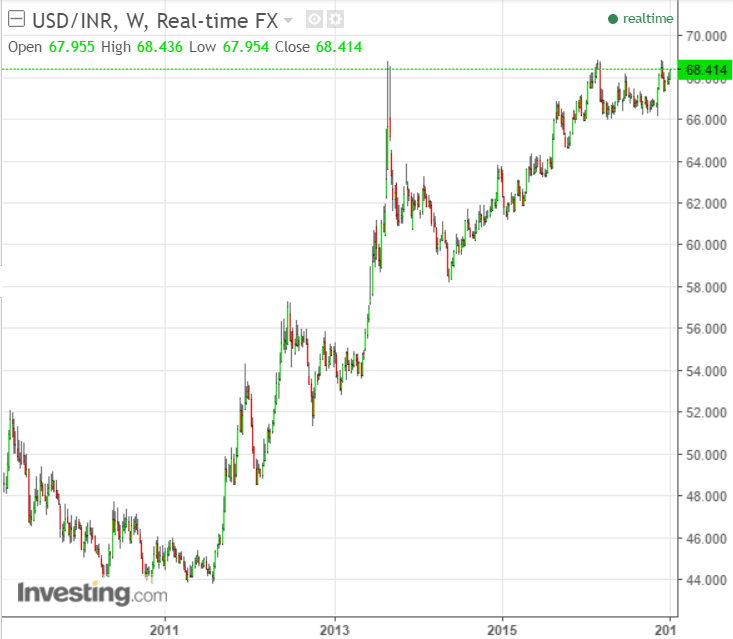 From all of us at Capitalmind, here’s wishing you a very Happy New Year 2017!
This will be a very eventful year for markets. Donald Trump will take over the US Presidency on January 20. Going by the way he’s handling international relationships so far, the next four years promise some entertainment, horror and outrage, not necessarily in that order.
The Demonetization impact will be heavy on the Q3 results that start mid-Jan and gOno on through February. And in Feb there’s the Union Budget which is well awaited, largely for the reward of standing in line for your own money in banks.
And the international story will see action in terms of US interest rate hikes, a rising LIBOR, a faltering China, an inflation ridden Japan, a few surprises from the EU and much more. A few of the stories we are going to track:

The Donald Trump Impact on IT

Donald Trump takes over as the US President in March 2017. One of the things he said he will do in the first 100 days is to crack-down on companies that send jobs overseas. A recent tweet even threatened GM for building the Chevy Cruze in Mexico and selling them tax-free to dealers in the US. He said there could easily be a border tax, if they didn’t start producing the cars in the US.
That kind of action will hit a lot of companies in the IT space in India. These companies take US jobs and replace them with cheaper Indian labour. The work is actually moved out of the US, and people in India do the actual work, and there is no “border” to cross since everything is on the internet. But this can also be somehow taxed. India has in fact taken the first step here by asking US companies to charge Indians a service tax of 15% if they buy “downloadable” items from websites (and it’s not just the US, it’s from any non-Indian site). This kind of rule can easily be applied to payments made by US companies to Indian companies. That will hurt their revenues substantially.
Another threat is to reduce immigration and make visas difficult. This is something Brexit will also do in the UK. And this hurts IT companies because, let’s face it, they do want cheaper Indian labour to work in the US at low rates as well, and many of the H1-B visas are granted to people who don’t get paid a larger amount of money compared to a US resident of similar caliber. There is a proposal to change the way H1-B visas are given – that is, to give them first to the people who are offered the highest salaries, and to then work it downwards. That would definitely do more justice to visa applicants who are super-qualified but don’t get through because they are too late. But it will hurt the likes of Infosys and TCS who tend to take as many US H1-B visas as possible.
Either ways, the Trump administration will not be kind to the likes of TCS and Infy.

There are some really bad Italian banks. The bad loan ratios in Italian banks have hit 16% to 18% – meaning, one-sixth of the amount lent is in trouble. One such bank, Monte dei Paschi di Siena (MPS), is the world’s oldest, and is tottering on the brink of existence. The government in Italy is looking to bail it out with 8.8 billion euros.
The bank wanted to get private investment, but that fizzled out after political issues like the resignation of Matteo Renzi, their Prime Minister. That meant their taxpayers get to step in now, and put up capital. One of the key problems here is that many depositors chose to buy subordinated bonds (or were mis-sold them) in lieu of deposits, to get a higher interest rate. If the bank were to be “bailed out” according to regular ECB rules, then such subordinated bondholders would simply get bank shares and no money. With the stock having fallen 84% in the last year, and looking to fall more, this might not be acceptable to the retail investor. And retail investors, apparently, owned 65% of all such subordinated debt, and they vote, so the politicians will protect them.
So the “bail-in” will happen only to institutional investors, who will get shares, but retail investors in such bonds will get their money back.
The 8.8 billion is a pretty big amount. That’s Rs. 60,000 crores. Italy’s GDP is 10% below India’s. And Rs. 60,000 crores would be a lot of money to bail out an Indian bank. MPS isn’t even the biggest – the largest Italian bank, Unicredit, needs 13 billion euros or more.
We think they will all be bailed out, of course, because the ECB is not going to let them fail. But the bailout will have ripple effects based on who gets “bailed in”, especially institutions.
In India, this is a warning for investors in recent bank bonds that are “perpetuals”. They offer a higher rate of interest, but they can be hit if the banks see a major capital problem. While India isn’t (yet) as bad as Italy, remember that some banks are in a horrible situation: IOB, for instance, has a gross NPA ratio of 21%, and total deposits of Rs. 208,000 crores, which makes it a large bank that’s on the edge.

And then, India’s Evolution

We have to keep a close watch on the scene in India. Already, two wheeler sales are down by 30% in December. Then you have results coming around soon, which will tell us the market impact of demonetization.
Soon, we’ll see some election results. And the budget on Feb 1. And so much more.
India might take a completely different path to the western economies. And it appears that foreign investors don’t like where it’s going either. The rupee doesn’t seem to be doing that well, and is slowly inching up to the 69 level.

It’s isn’t just India, of course. The Chinese Yuan has seen a decline too, with the USD-CNY trading at levels last seen in 2008, after which the Yuan strengthened considerably. Still, the drop in the rupee means, to some extent, a drop in investor sentiment towards India.

We could go on, of course. There’s the trouble brewing in China. There’s geopolitical issues. There’s going to be more drama as bank withdrawal limits continue in India. There’s going to be some other complication we haven’t predicted.
But in all of this madness, our goal at Capitalmind will be to keep you informed and educated. We’ll bring some of this together in different ways – videos, webinars and posts. We hope to do even greater things at Capitalmind Premium. It will be a great time to invest, but then for us, all times are great times to invest. We’ve seen our premium portfolios make fabulous returns in the year recently, from 28% in options to 30%+ in stocks – no matter what happens, there will be opportunities.
Let’s leave you with that. Tomorrow is always the beginning of the rest of your life. May 2017 bring you loads of joy and wealth. Only don’t buy those Italian banks just yet.