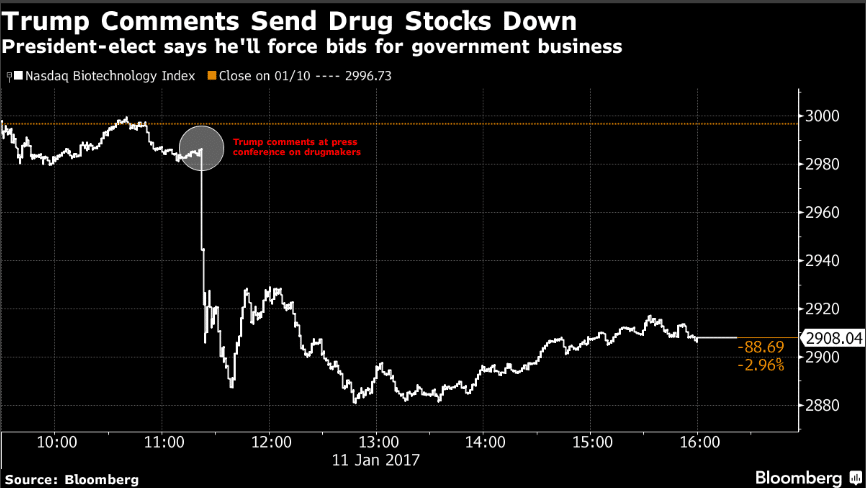 How do you make a first impression? Something like what the American President-elect Donald Trump did in his first press conference since being elected the Leader of the Free World. Here is what the Trump said:

1. We have to get our drug industry coming back. Our drug industry has been disastrous. They’re leaving left and right. They supply our drugs but they don’t make them here, to a large extent.

2. We have to do is create new bidding procedures for the drug industry, because they’re getting away with murder. Pharma has a lot of lobbies, a lot of lobbyists, a lot of power. And there’s very little bidding on drugs. We’re the largest buyer of drugs in the world, and yet we don’t bid properly. We’re going to start bidding. We’re going to save billions of dollars over a period of time.

Historically companies have consolidated, merged or acquired and shifted their tax bases outside the USA. They’ve moved manufacturing facilities out of the US. Which meant they were and are paying a lot lesser taxes than they would have paid having their bases within America. This means higher executive remuneration outside the US by outsourcing manufacturing to countries and plants in Asia, Africa and Europe. And lower R&D investment in the US. The US gets lower tax, and lower employment due to the loss of production.  Trump has recently made Carrier and Ford recently reverse their Mexico production plans while GM and Toyota have had to move their painstakingly planned production base.
There is also the issue of higher drug prices. This is mostly in relation to Medicare costs. Trump suggests competitive bidding and direct price negotiations, as Medicare is the biggest purchaser of drugs and medical services in US. This is a policy that even the Democrats are in for. How soon will this happen? – A vote on an amendment to the 2017 budget resolution backing the government’s ability to negotiate drug prices on behalf of Medicare will be put to vote shortly.

What was the impact of this blip?

This is how Fortune put it: The NASDAQ Biotech Index is down 3.5%; S&P’s biotech ETF is down 3.7%. Big cap biotechs like Biogen, Celgene, and others are all down anywhere from 2% to 3.5%.

Much about the impact, they say, is negative for biotech, which expects to be able to price drugs at high levels to recover their costs of research. If there’s a price cap or bidding, it hurts the players who like the current system of contracts to continue.
The Nasdaq Biotechnology Index of 164 companies was down 22% in 2016, the first year long losing streak since 2008 and the worst year since 2002.

What did the Industry say?

Brad Loncar, who runs a Nasdaq-traded fund focused on immunotherapy:

His choice of words in saying that this industry is ‘getting away with murder,’ I think, is a cheap shot. A sound bite like that has the potential to scare a lot of people away from investing in this industry.

The drug industry is saving lives not getting away with murder. Drug pricing abuses need to be fixed, but that’s a shameless soundbite.

Heather Bresch, CEO at Mylan NV said on the lines of the JP Morgan 2017 HealthCare Conference.

It would be premature to respond to any one thing. The pricing model has got to change. I know that scares a lot of people. If anyone is walking away from the conference, thinking business as usual, that’s a mistake

Washington-based Pharmaceutical Research and Manufacturers of America (PhRMA) – one of the largest lobby groups for Pharma Companies said:

Biopharmaceutical companies invest more than $70 billion a year in research and development in the United States – more than any other industry in America – and are responsible for 4.5 million American jobs. Breakthrough medicines are revolutionizing how we treat disease, saving patient lives, reducing health care costs and improving public health. Today, medicines are purchased in a competitive marketplace where large, sophisticated purchasers aggressively negotiate lower prices. We look forward to working with the new administration and Congress to advance proactive, practical solutions to improve the marketplace and make it more responsive to the needs of patients.

PhRMA is also planning an expensive ad campaign to take on the negativity the industry has faced on drug pricing (meaning to show how tough it is to take new ideas from the lab to the drug store).

A refresh on private negotiation in #Medicare #PartD & why interfering w/ it could negatively impact beneficiaries: https://t.co/uEyC2lzYSv

Pharma needs to figure out how to regulate itself before the government steps in and tramples on its beloved incentive structure. If we don’t have that, then our leadership role in producing more drugs than anyone else in the world will fall. We’ll fall under our own weight if we don’t reform pricing practices.

This was not something that the Industry expected Trump to talk about since this was something that the Democratic campaign spoke about. This can be clearly seen from the fact that Biotech and Pharmaceutical stocks rallied since November and yesterday was the first big fall since then – wiping out all the gains made from the thoughts of an advantaged industry from the Trump win.

What actions have some already taken?

Mylan which had to write down its forecast due to the EpiPen saga has released at half of the cost of its original – a generic version of Epipen while Brent Saunders, CEO of Allergan who pledged to hike drug prices by less than 10% tweeted

For the Indian Pharmaceuticals companies, and in other Asian countries (Generics are largely manufactured in China and India while Singapore and South Korea rule the higher-end of biologic drugs) the implications are mixed. The cost of manufacturing in India or China are in many cases 1/5th of developed markets. This new trade policy would mean shifting of bases to the US or to FTA countries, which would bump up costs. (Singapore, South Korea, and Australia all have free-trade agreements with the US that insulate them somewhat from import taxes)
Will this happen? Depends on the disincentive. If import duties are too high, India and China will see an exodus. Still, the “Make in India” campaign that the Narendra Modi government is riding on, saw Drugs & Pharmaceuticals attracting $452 million – it would be tough for the government to let go of this easily.
South Korea is another giant with massive growth in biologic manufacturing. The country’s Finance Minister Yoo Il-ho has vowed to go against the irrational demands of the US on trade. UK and Europe which are already waging their own war may come together and oppose this demand, after the issues with Brexit.

What do we watch for now?

As David Sabow, Managing Director at Silicon Valley Bank put it “The smartest money in this space is watching the first 100 days” of the Trump administration.
How will biotech and pharma respond? The answer depends on whether Trump’s bite is as big as his bark.
Of course, words are just words, and implementing price negotiations and competitive bidding is no easy feat in a GOP-controlled Congress. But it seems biopharma’s post-election sigh of relief may have been premature – @ Sy Mukherjee.

If the US Government wants cheaper drugs, India will benefit. Any bidding that allows Indian drug cos to bid, India will benefit.
If they insist that drugs be manufactured in the US, and even the API (the active ingredient) should be from the US, then Indian drug manufacturers will hurt.
If there are larger import duties on drugs, Indian manufacturers will hurt.
There will be a new FDA chief soon, who will be appointed by the Trump administration. That person’s views on regulation and FDA policy will also impact Indian pharma stock potential.
Overall, pharma has been reeling from the impact of FDA action in the last year. The closure of the TPP is a positive for them, since it expands the market for Indian-made drugs to countries that would otherwise not be possible if the TPP (Trans Pacific Partnership) was signed. Trump has said he will walk away from the TPP, which basically ends it.
While the market seems to have taken a hit, we think that the impact is evenly distributed on either side, good and bad. Before we speculate about actual impact, let’s wait for some actual action – Trump has been notorious in saying a lot but not doing quite that much, and the first 100 days will show us what he really will do.
Love it or hate it, do leave us with your reviews in the comment section below!