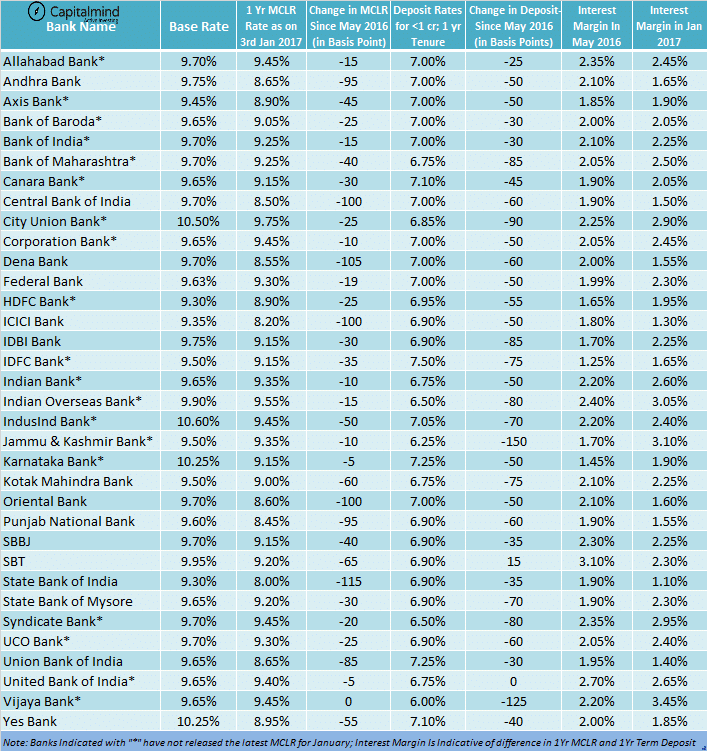 But do you get the benefit?

If you already have a loan, don’t jump in joy just yet!
Because your rate isn’t coming down. Loans will only be cheaper for new customers.
New loans are cheaper because they get the new MCLR. That’s how it goes – you go take a loan, and they’ll give you a spread on the MCLR right now. Currently in Jan 2017, a home loan from SBI is at 8.65% (0.65% above 1 yr MCLR) where as it was around 9.80% in May 2016.
What about existing customers? Existing customer have their floating loans linked to either base rate or MCLR. For those who are linked to base rate their is no relief in near term as the base rates have not changed much.
Meaning: Base rates haven’t changed. If your loan is linked to the base rate (most loans pre-April-2016 were linked to the base rate), your loan interest rate will remain the same.
And for the loans linked to MCLR, its a delayed cheer as their interest rates are not reset until their reset period is completed.
Here’s how MCLR works. You take a loan. It’s given at MCLR + a spread. So if the MCLR, on the day of your taking the loan, was at 9% and your spread was 0.7%, you pay 9.7%. But then that rate is fixed for a “reset period”.
The reset period can be anything – from a week to three months to a year. The 1 year MCLR will typically be used in housing loans and will reset after one year. So if you took your MCLR linked loan in April 2016, you won’t see a reduction in rates until April 2017, three months later! You pay the higher interest rate for three more months, and then the rate resets.
Note: Kotak bank has a 6 month reset period.
Please read our original post on MCLR here.

Why the reset period?

Banks complain that when lending rates fall, the base rate means every borrower, including existing borrowers, get the benefit. But banks can’t do the same thing to existing fixed deposits for which they have to pay the higher contracted interest rate all the way to maturity.
But when rates rise, depositors take out their deposits (even at a small penalty) and re-buy them at higher rates. So the bank loses in both cases.
Which is why the RBI allows them a reset period in which they can adjust their input and output rates.

What happens if my new reset interest is lower?
If post resetting your interest rate, effective interest rate comes down. Ideally your EMI should also comes down. But under MCLR, EMI’s are not getting reduced but the loan tenure will be coming down and you will be paying same EMI as earlier (with negligible variations). And these are not hard and fast rules, you can negotiate with the bank to reduce the EMI as well. In earlier cases (when linked to base rate) the banks would not change the lending rates, even when base rate was cut. They would simply say the risk profile has changed, so the spread. Now with MCLR in place they need to provide risk profile review for the customer, if they are changing the spread.

What to do? Can I Shift to the Current MCLR Rates from my Existing loans?

If you are on the base rate, move to the MCLR. This will cost you around 0.5% or so but in a falling rate environment you need to do this.
But for a loan already linked to MCLR, if you want to shift to new MCLR before an interest reset date, then you need to pay a penalty to change it to current rate. Some banks permit and some banks do not. For example if you have taken a home loan in May 2016 in SBI, your effective interest rate would have been  9.80%. Your next interest reset date will be May 1st 2017 (one year later).
Even though SBI has reduced their MCLRs in Jan 2017 by almost 1.15% (since May 2016), your loan pays the higher 9.8% rate till May 2017.
If you want to have the new rate from Jan 2017 itself, you need to pay a penalty of 0.5% on the outstanding loan amount. This is SBI’s policy, other banks may charge differently. 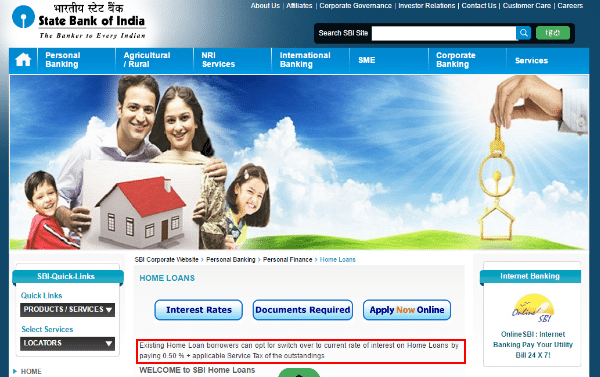 Should I Shift to the New MCLR Rates?

If your loan is linked to a base rate, it makes sense to shift to MCLR rates as they are comparatively cheaper then the loans linked to MCLR. The current base rate of SBI is 9.30% where as its one year MCLR is at 8%. A small penalty now will save you a huge amount in the future.
Customers who have taken loans post April and have their interest rates linked to MCLR, It depends on the loan size and loan disbursal time to decide whether to shift to new rates or not.
Lets take an example:
Example : We assume you have taken a home loan of Rs 25,00,000 in May 2017 (or later) for a period of 15 years in SBI. The effective 1 year MCLR rate in May 2016 was at 9.15%. Considering a spread of 0.65%. The effective interest rate applicable for the home loan would be 9.80%. Your EMI will be set at Rs 26,560. Your interest will be locked in till April 31st 2017. Your next interest will be reset on 1st May 2017.
Here’s what happens, depending on which month your loan was taken. (We even change the interest rates according to the MCLR drops by SBI)

The last column tells you the story. If you’ve taken your loan in May or June, the difference in interest won’t cover the cost you pay to shift now, so you might as well wait.
If you took your loan later, you will save some money by shifting now.
The calculation

Moving home loans is easier now than earlier. Banks can’t charge you a pre-closure fee. However, most other banks, even if they are cheaper, will charge you 1% of a loan as a processing fee – which means it’s probably better to pay a penalty of 0.5% instead.
However, some banks will get enterprising and hopefully, remove this fee.

What Base Rate? I have BPLR!

If you took a home loan from, say HDFC Bank, you don’t get a base rate. Or an MCLR. HDFC bank doesn’t even sell you home loans.
It’s sold to you by HDFC, the parent company which is a home finance company. Many other banks do this too, because home finance companies have some advantages.
The main problem here is that any lower rates won’t apply to you. HDFC has cut rates by 0.9% but have taken special care to ensure their current customers do not benefit. (Again, they will pay a penalty). Plus, the way they have done is to lower the spread for new customers, keeping the BPLR (their version of a floating rate) constant.
Worse, you can’t even shift out of a housing finance company to another bank easily. They charge a pre-payment fee. (They are allowed to. Banks are not.)

The Era of Falling Rates: Getting The Lowest Cost Loan

If you are in the market for a loan, this is a good time. A car will cost less in terms of interest, and so will a house. But try to get an MCLR that resets every three months or so.
If you already have a loan, then your choices are:

The Impact on Banks: New Loan Push, But Mostly Negative

Loan growth is the lowest in 23 years. And banks need more loans to be given. So the hope is that lower rates means new loans and higher growth.
But the difference is this: bank borrowing rates are down already. Their borrowing from wholesale markets has been down for a year now. From retail deposits, rates were cut two quarters ago. So what this rate cut will do is to reduce their effective margins.
If a bank has Rs. 80,000 cr. as current loans that will drop by 1% in interest payments in say three months that’s a loss of 800 crores in interest. For that to be offset, they will need new loans of approximately 10,000 crores, or a 12% jump in credit growth, for them to just be in the same place in terms of interest income.
So in the near future, bank interest income is likely to fall. And that’s one reason why you shoudn’t blindly buy a highly priced private sector bank – high valuations require high growth, and growth in credit won’t necessarily raise earnings.