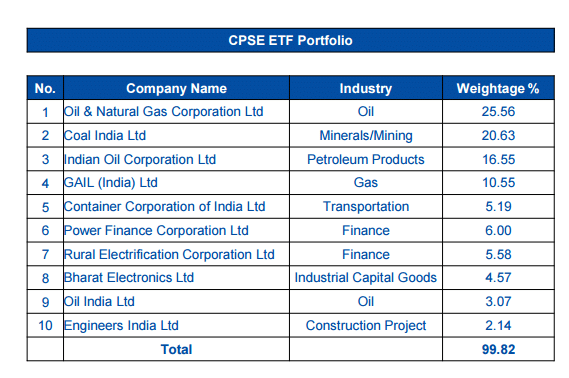 Would we apply for the CPSE ETF IPO in the next few days? The Government offers a 5% discount on shares bought in this IPO. Capitalmind gives you an in-depth analysis.
The Reliance CPSE ETF goes on a new IPO between Jan 18 and Jan 20. The CPSE ETF has 10 public sector stocks in it, and allows the government to sell those stocks without actually losing control. Effectively the ETF unitholders (as a mutual fund unitholder) own the stocks. And after a very successful listing in March 2014.
The earlier edition created the ETF, with retail applicants being given units at a 5% discount. The ETF listed at Rs. 19 or so, and has done reasonably well with a 30% return in about three years. But it’s done even better than the underlying index! Here’s a comparison: 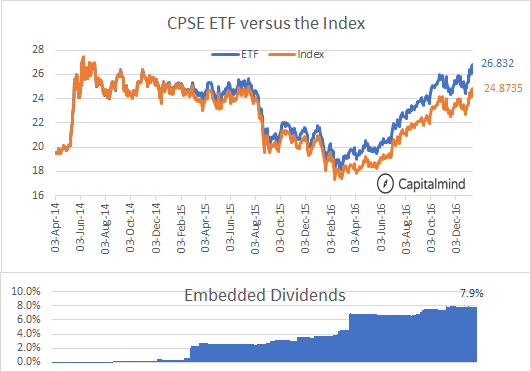 The reason the ETF is quoting at higher than the index (it’s supposed to be 1/100th the index) is that it gets dividends and reinvests them.
The dividend yield is about 4%, so in two years or so, the ETF has an 8% value higher than the index. The dividends seem to have been reinvested into stocks.
Typically ETFs don’t directly buy stocks. But in the face of redemptions, they might redeem units from Authorized Participants for cash. Usually when a market participant (a big player or broker that buys units in the market) gives units to the ETF, the ETF gives it a basket of stocks. But sometimes in a heavy redemption scenario, they could give cash instead, so that the participants don’t have to dump shares in the market. This is what is likely to have happened.
In the NFO in March 2014, the CPSE ETF retail buyers were offered a 5% discount on purchase. They bought Rs. 3,000 cr. worth units (and it was further oversubscribed). The current AUM is Rs. 2,280 cr. which is much lower than the AUM on the IPO! Why?
That’s because people have sold units in the market. When you give people a free 5% they are likely to take it rather than hold on to the shares for a long time. When they sold, Market Participants bought (they take the other side). These participants then give the ETF the units and take back shares or cash, and the AUM reduces.

There’s a 5% Discount Now Too! Would We Buy?

The product note says so. But it says this: A discount of 5% will be on the FFO Reference price of the underlying shares of the CPSE Index.
What does that mean? Here’s our reading of it:

There is one caveat. A retail applicant will get a minimum of 5000 units if he applies for them. If the total applications for 5,000 units are so much that they cross the IPO limit, each investor gets equal shares, using a similar calculation. (Read the full document)
You might say hey, why not just buy? Take the 5% discount and sell! That’s a neat profit?

Reasons Not To Buy: Price Risk

You’ll put your money now. You will get allocations around February first week or so. If in that time there is a crash of the stock price, you will get the January price which can be higher. So you have the price risk for a few weeks.
Secondly, look at the CPSE February Future price. It’s at a Rs. 44 discount to the stock price. (Index at 2489, Feb future at 2445). They actually expect the index to dip after the units are allocated – precisely because people will sell.
That means even if you got the units at a 5% discount, you carry the price risk till the ETF units are given to you. And then, when you sell, hundreds of people like you will also sell, bringing the price down further (as the future price seems to expect).
Also note that there are some transaction charges of Rs. 100 to Rs. 150 per application that will apply anyhow.

Portfolio: Heavy on Energy/Oil and Gas

The CPSE Index is 1/4th ONGC. And then, 1/5th Coal India. It’s got one logistics company (Concor), two engineering companies and the rest are in the energy or power sectors.

While the ETF has done reasonably well with a return of 30% in nearly three years, you should understand that most other indexes have done even better. The CPSE index hasn’t even crossed its own high in 2014!

Our View: Not Worth The Arb Risk, and Boring Portfolio

Carrying price risk for a few weeks is not very useful. You can’t even hedge using futures, as the future seems to quote 2% below current levels (this may change in this week). Plus, with a budget in the middle (Feb 1) it’s not great to keep unknown risks on.
Another reason you can’t hedge is that you can’t easily be assured of Rs. 500,000 worth units, which is how much you need for one future to properly hedge.
A 5% cushion is nice, but not nice enough unless you love the underlying stocks.
The portfolio isn’t very interesting to hold for the longer term. The ETF mechanism ensures that the stock ownership isn’t easily privatized so the government isn’t actually freeing these companies. But if you like them, then using the ETF may be a better way than buying each one individually.