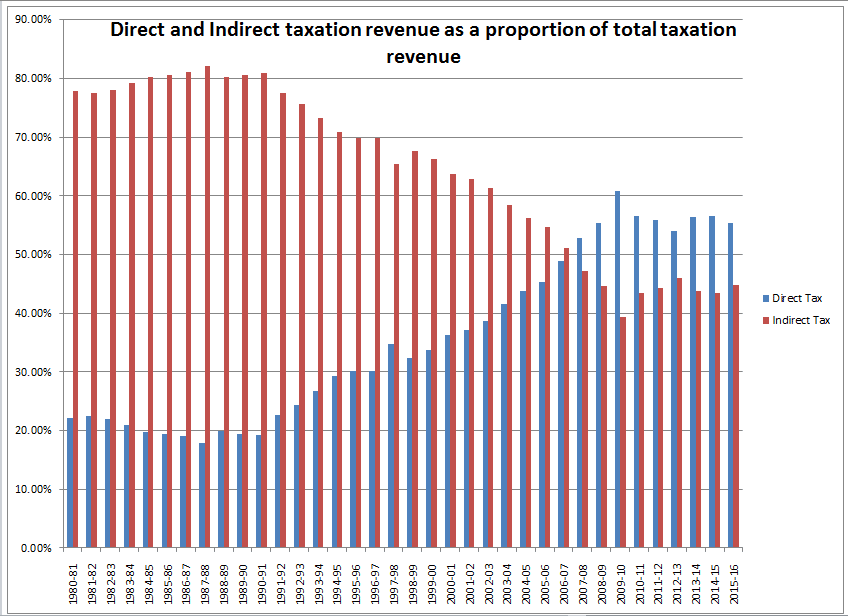 “It’s impossible to be sure of anything but Death and Taxes” wrote Christopher Bullock in his book The Cobbler of Preston, a quote now often referenced to Benjamin Franklin.
No one likes paying taxes, given that most of the time the majority of us feel shortchanged in terms of the services and comforts we expect from the government. Yet, since centuries the only way any Kingdom / Country has been able to run is by collecting taxes – both Direct  as well as Indirect.
In India, Income tax on Individuals was first introduced by the British in 1860 and while there have been changes along the way; the idea of taxing the citizens based on their Annual Income has stayed over time.
One of the recent (actually not too recent given that this has been proposed by various persons over time) trends to emerge was to totally abolish Income Tax and instead collect revenue by levying a small fee for every transaction carried out through a bank.
While the idea seemed far-fetched earlier, given the speed at which we went through the demonetization process, we would like to take a cursory look to understand the unique distinctions between these two forms of taxation and the Pros and Cons and whether it makes sense for India to move towards a style of taxation that is not implemented elsewhere in the world.

The Tax system we currently follow is a Progressive Tax System. Those with lower income pay a smaller percentage of their income as tax, and those with larger incomes pay a greater part of it. This is a fair system that is prevalent in major countries across the world.
But Direct taxes cannot be too high since high taxation actually leads to people trying their best to avoid  them(legal or not). So governments also tax Goods and Services which are also known as Indirect Taxes and which aren’t so easily avoided.
In India, for long, Indirect Taxes were the bread and butter though in recent times, the proportion of direct taxes has climbed substantially above the contribution of Indirect. 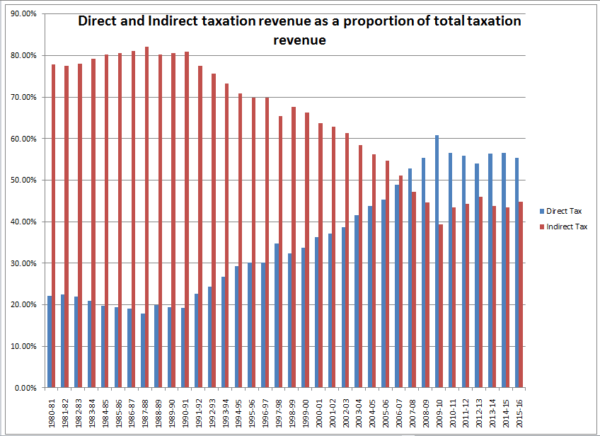 In fact, with GST being a reality in this year, the ability to avoid payment of taxes on goods and services will be further reduced. As the picture above showcases, India has seen a growing amount of taxes coming in from Indirect vs. Direct.
But if you compare our Tax Revenues as % of GDP, India remains far behind the advanced countries which isn’t much of a surprise but showcases how the trend going forward could emerge. 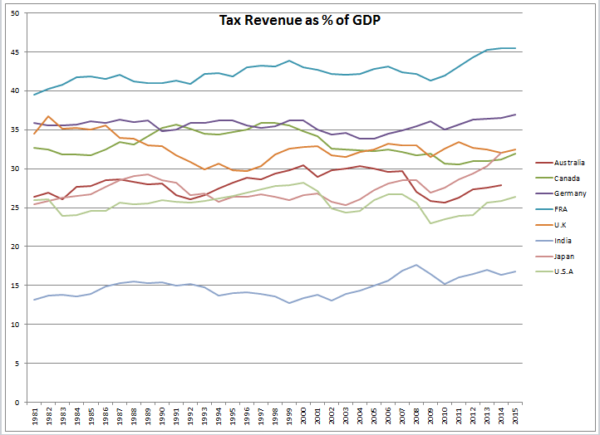 Advocates of Banking Transaction Tax claim that by moving away from the collection of Income Tax and instead charging a percentage based fee, the government could collect way more and hence reduce other forms of taxation.
The government has been in an overdrive of sorts to push people to opt for digital transactions versus usage of physical currency. Is that a precursor to push for a fee for every transaction while at the same time reducing Income tax rates or expanding tax brackets before finally discarding a tax on income?
That question has no answer today. But look at what the finance minister said when addressing Bank heads in November  makes for interesting reading (between the lines if you wish).
He said:

Indians are big users of currency and this is also reflected in Notes in Circulation as percentage of GDP. As the recent demonetization episode showed, lack of currency notes literally halted much of the country with the total impact yet to be fully known. While Direct Tax collection is rising, the tax rates themselves have seen an overall downward trend with the exemptions rising by an average of 10% annually over the last 30 years. With average inflation being at 7.75% over the same amount of time, this means that tax payments, for those who qualify at the entry level are lower than what a person would have had paid 30 years ago. 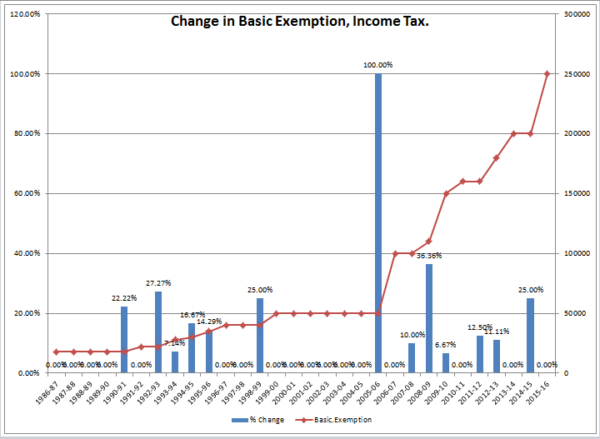 Given the trend of small changes, we believe that expectations of a doubling of minimum exemption to 5 Lakh is doubtful. It’s more of a case of small moves over time.
At the higher end, taxation of those who qualify for the highest slab has reduced from a peak of 50% during the late 80’s and early 90’s to 30% today. (Of course the net effective rate, after surcharge has been as high as 97%!)
There is a huge expectation of basic exemption to be raised from the current 2.5 Lakhs to 5.00 Lakhs especially given the trouble people faced during the demonetization exercise, as well as the fact that basic exemptions were not raised during the last budget.
But such a move would be a 100% hike, something we saw only once earlier. This looks doubtfule. On the other hand, a small increase in basic exemptions would not satisfy citizens,  with major elections round the corner. The middle ground the government may instead take, is to hike the basic slab to 3.5 to 4 Lakh while at the same time cutting down on a few exemptions.
Either way, those who earn less would end up paying a lower amount of tax or none at all.

A Regressive Tax on Banking Transactions

A regressive tax is the opposite of a progressive tax. While in parogressive tax we noted that tax rates move higher with income, in a regressive tax people pay the same percentage of tax regardless of how much they earn. A bar of soap has sales tax+excise duty at 28%, which is the same amount no matter how much you earn.
While most countries of the world follow a system of progressive taxes, we do have a few countries, mostly those in the Middle East, who have a zero income tax structure. But as we noted above, every country requires tax income for building infrastructure, providing for education and health of its citizens, cost of defense and so on.
Given that there is no tax collected individually, the secondary way many countries choose is to tax everyone by hiking the cost of services that are provided. This means that someone earning a low income would pay a very high percentage of his income to get basic services while the percentage drops down in a linear fashion as the Income climbs.
The Banking Transaction Tax that is being talked about has never been implemented anywhere worldwide and in that sense, it’s a unknown in terms of both the cost of implementing such a rule and the impact it makes on the total economic cycle.
Before the 2014 elections, a tax research think tank suggested that taxing every transaction at 2% would yield anywhere between Rs 14,00,000 crore to Rs 40,00,000 crore which is way higher than Centre’s total tax revenue which was about Rs 10,38,037 crore in the year 20013 – 14.
We think this is near impossible, because this will kill online or banking transactions.
Take a look at the chart showcasing the amount of transactions that are carried out by cheque alone (as% of GDP). 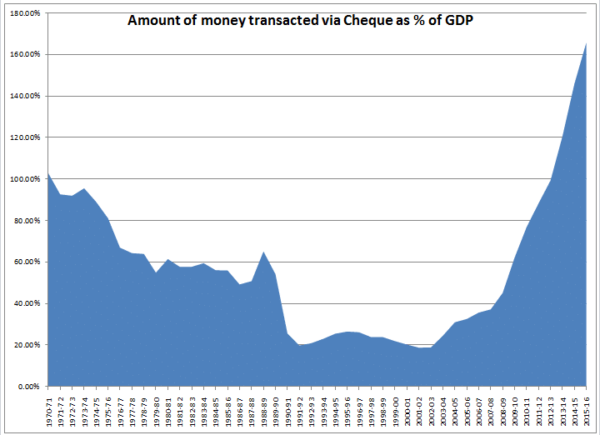 RTGS, for instance, is much higher. Nearly 100 lakh crore rupees is transferred each month through RTGS (which is about 70% of GDP, each month!).
Taxing each such transaction at 2% will just kill the entire transaction process. Would you transfer money to a mutual fund if you had to pay 2% to the government each time? And you may only be parking money for a short period – would a round trip cost of 4% be okay?We don’t think even a round trip cost of 0.5% will be okay, regardless of how low income tax is. Imagine a company that has to pay and receive money constantly and will “rotate” the working capital around a few times a month – they will simply have to shut shop.
Finally consider the impact on credit, especially short-term. You pay back a loan, and you will pay 2% more each time you return money. Overdrafts, where you take money and return it in very short periods, will have a 4% higher cost.
With lower credit and investment, the economy gets hit hard.
Taxes are friction and if we were to implement a tax that were to collect a small fee for each and every transaction, that would doubtless lead to the kind of slippage that can derail the economy at large and lead to large scale barter / off the books transactions. Why transact through a bank and pay 2% if you can just give someone currency and pay 0%?
But worst affected will be those with small income as he regardless of how small he earns, he will pay a tax. Even Service Tax which is collected on a host of services is not required to be collected / paid if the provider doesn’t make Rs. 10 lakh a year. A tax that is compulsory for everyone who transacts through a bank will defeat the whole process of trying to move people to Digital to ensure better compliance.
As Manu, the ancient sage and lawgiver, says in the ‘Manu Smriti’ “As the calf and the bee take their food little by little, even so must the king draw from his realm moderate, annual taxes”. A regressive Banking Transaction Tax would neither be small nor moderate. To tax every transaction is hugely regressive, and would result in total chaos for investments and credit.