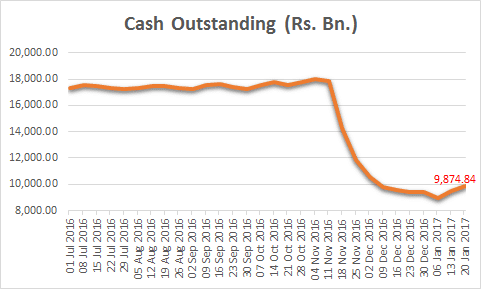 RBI has removed withdrawal limits on current accounts and overdrafts, and all ATM limits it had placed. Notification:

This is a good thing.
What it means is:

A Relief, at last, if Banks have cash

With oncoming elections, the need for cash must have been rising. Additionally, companies see the need to draw and deposit cash as their customers need it.
This will be a welcome relief for them.
However we expect ATMs to continue to run out of cash at a higher pace than pre-demonetization. This is largely because the return to cash – even if not a 100% return – has been stifled by restrictions on amounts per day.
The system Has Rs. 9.8 trillion rupees of currency in circulation now, and the RBI seems to be printing furiously.

Is this enough? The RBI is seeing an increasing amount of cash being moved back, which means people are withdrawing in reasonably large numbers. We’ll have to see how much things change after the limits are eased completely.
The incentives for cash based transactions still remain. Apart from being simple, easy and fast, cash is also very reliable unlike our current banking networks. However, there is the added factor of “will not pay tax on it” for merchants who may not declare such transactions at all, and thus create more black money.
We should hope that some transactions have moved from cash to electronic mode, forever. But if it’s only a stop-gap arrangement, then it’s debatable what good has really come out of all this.
We also don’t understand why the RBI would still stifle savings bank accounts. Our guess is that we’ll know soon in the budget, or with a subsequent clarification from the RBI. Looking at the data, we should have all limits removed by the end of March.