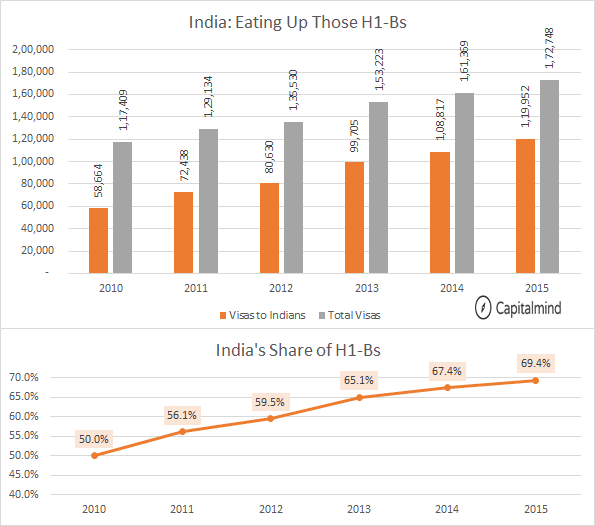 The US H1-B program is a non-immigrant visa issued to people that are well qualified and where, for a job, a company couldn’t find an equivalent US worker. But it’s been abused for many years as a mechanism to bring cheaper labour into the US, and the US administration under Trump is widely believed to restrict the issuance of such visas. The feeling is that the abuse of such visas can be reduced if, for instance, visa issuance is only to people getting $100,000 per annum or more.
Indian IT companies should be a worried lot. They send a lot of people to the US on such visas, which allows a person to work in the US. They need to: most of the business they get involves having some people “onsite” and others offshore in India. They should technically hire the “onsite” folks from the US, but there is a significant bias in using people from India instead, because they are more likely to help offshore more work and of course, are cheaper.
Data from the US government shows that India has been the biggest receiver of H1-B visas since 2010, and that share has gone from 50% to 69.4% in 5 years:

H1-B visas are one big incentive to the Indian employee too – it allows them to go to the US, get what seems to be a better salary and lifestyle, and perhaps helps them in a process to get a green card too.
H1-B is also a big thing for students, who go on an F-1. China commands about 33% of all F-1 Visas now, and India about 12%. Once students finish their education, they need an H-1B to work in the US.

The Typical Use: Process Capture, Shady Ads and Reuse

There’s a lot of things that Indian companies do well – and one of them is to get the process right. The H1-B application is a mega-checklist. You have an opening. You need to advertise somewhere for it. People should apply. You need to have rejected local candidates. Then you say ok, I’m going to look outside the US. You find a candidate, and you apply for the visa.
The process opens April 1, and all applications are taken in. Typically nowadays it takes less than 15 days for the visa quota to get full.
Indian IT companies have mastered the process. Appropriately, positions are created, ads are placed somewhere, and either no responses are received or candidates are rejected summarily. Indian candidates are miraculously found. And the entire application file is ready on April 1 – not just one, but thousands of them.
Obviously, if they meet the checklist, there’s no real reason to refuse visas. While this isn’t fraudulent – it sometimes does reach into fraud territory (one case here). But it does deny US workers a chance at the same job, which is usually by design. For one, the Indian companies want to offshore more work, which would be a concept well understood by someone from India. For another, the Indian IT worker who probably makes about $15,000 a year in India will think that $60,000 a year is a great deal in the US. (Which it may be, but an equivalent US worker may charge higher)

If the new lower limit is $100,000 per year, that will kill the outsourcer’s margins. They can’t charge more, at least not 50% more. They can’t send lower skilled employees to the US. They won’t be able to do the same kind of business they currently do.
There will be a significant problem for Indian outsourcers – with more than 100,000 of such visas given to Indians every year, we have to expect that any move to increase costs will hurt them substantially.
I would expect that top and mid-tier IT firms who have mastered the “process” will face challenges in sending people to the US, and in the short term, win business. In the medium term, they might have to live with lower margins and higher US costs by hiring local and trying to offshore more work. (And if there are transfer taxes, as trump has suggested, that story gets hit too)
The biggest loser is the Indian H1-B worker who’s currently in the US, at a lower salary. Any renewals will not happen, and the H1-B expires in about 6 years. People with an H1-B buy houses, pay taxes and social security, and expect to live in the US for longer – and that expectation has to change. Such people should start looking for alternatives outside the US as soon as possible, in my opinion.
69% of all visas is near-total capture and when anyone gets that kind of marketshare, they should worry that the rules of the game will change. And it has.