The fiscal deficit is the difference between government expenditure and receipts (non-capital entries) and one of the most important numbers one looks at in the budget document. It tells you what the government spends above what it earns. For long, the number was at the mercy of the government whims and the stage of the economy.
But a growing revenue deficit means that the government needs to continuously keep borrowing to keep the car running. This is easy when the economy is growing, but if and when it falters, the whole system comes crashing down like a pack of cards.
To ensure some responsibility, the government in 2003 passed the Fiscal Responsibility and Budget Management Act (FRBM) which targeted the fiscal deficit and planned to eliminate the revenue deficit by 31 Mar 2008.
And then 2007 / 08 happened and the FRBM act was quickly suspended as the government went into a spending drive to make up for lost private investments. The act had stipulated a target of 3%, but in 2008 – 09, the deficit rose to 6.2%.It has steadily fallen since.
Here’s how we compare now, with other countries: 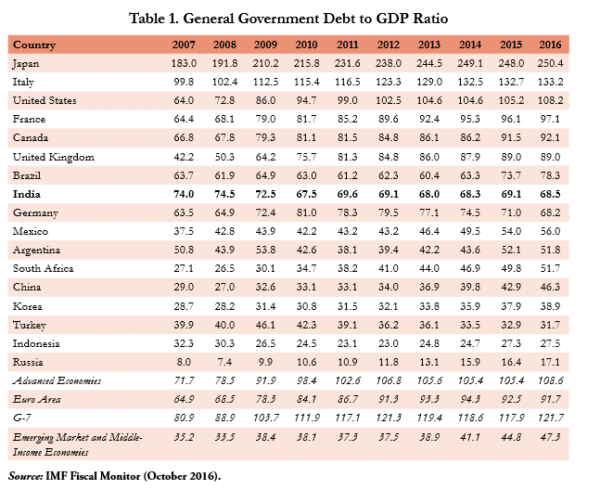 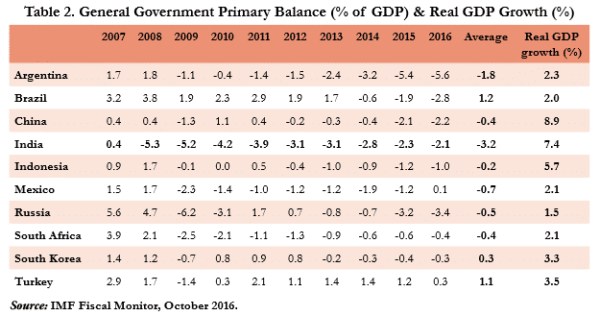 India has seen a falling primary deficit, from a 5%+ in 2009 to 2.1% in 2016.   (Primary level indicates the deficit not including interest payments). However the same IMF monitor says that the overall balance, including interest payments, sees India at 6.7% fiscal deficit, second only to Brazil’s 10% among large emerging economies. Both Brazil and India have high interest rates, which hurts their fiscal deficits.
However, India still has the highest average primary deficit in the last 10 years, compared to other developing nations. Brazil, Russia and China have seen higher deficits in the last two years as global trade and crude prices have fallen, which has helped India’s fiscal situation. That, however, can’t be expected to last.
Despite the steady and strong growth, India has a high Debt to GDP ratio. At 68%, we come just behind Brazil (78%) but are higher than China (46%) and Indonesia (28%). This is largely because India borrows a large amount and revenues aren’t quite high enough.
Having said that, a low Debt-to-GDP number isn’t itself a guarantee of a better run nation. Turkey for example has a fiscal surplus (as against a deficit that most nations including India has), but it can hardly be called “well run”. A couple of days back, Fitch cut the ratings of the country to “junk” category. S&P too has lowered its outlook for Turkey from “stable” to “negative”.
Japan is at disastrous levels,with 250% debt to GDP, but they get by with extremely low interest rates. (If Japanese interest rates ever touch 3%, the current debt levels would render the whole country insolvent)
There will be a new FRBM for India. The economic survey suggests that we shouldn’t let the fiscal deficit increase, even though we lose some of the benefits of lower crude prices going forward.