In the Economic Survey Report of 2016-17 is out. we have data on banking NPAs.

According to the Economic Survey 2016-17, Indian Banks 9.1% of the loans are considered as NPA. Which is the similar to current Russia and Korea during early 2000’s (East Asian Crisis). The major reason: a drastic increase due to over expansion of corporations during an earlier economic boom. This was majorly supported by bank loans. This was all good till input costs started increasing and revenues started falling, coupled with higher financing costs. NPAs should have been recognized long back, but it happened only when RBI pushed for an Asset Quality Review. 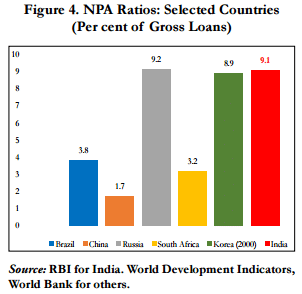 India’s private sector banks are doing better than PSU banks. The Gross NPA of PSU banks stands at roughly 12%, where as that of whole industry is at 9.1%. 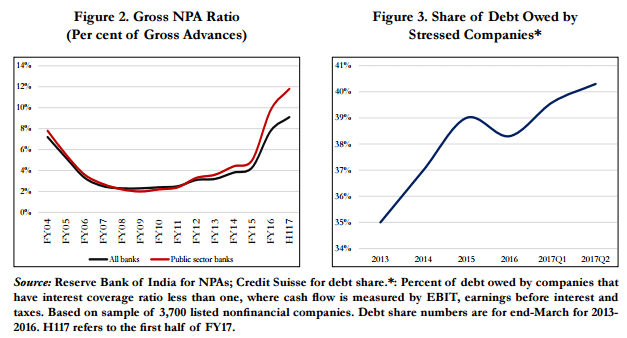 Roughly 40.3% of the debt is owned by stressed companies. Stressed companies are the ones which have interest coverage ratio less than 1. That means they don’t earn enough as EBIDTA to even cover their interest payments.
That further means 40% of all of India’s corporate debt doesn’t have enough incoming profits to even pay for the interest on the loans they’ve taken. (They end up taking more loans to pay up, or just get marked as “stressed”).

The top ten stressed corporations owe Rs 7.52 trillion of debt. That’s a significant part of all debt of banks, a very high high concentration.
While the report doesn’t name the stressed corporate groups, it surely points to conglomerates like Adani, Reliance, Vedanta, Videocon etc. These conglomerates were present in an earlier list reported by Credit Suisse.

There’s More:  5% of Advances Needs to Be Classified Under NPAs 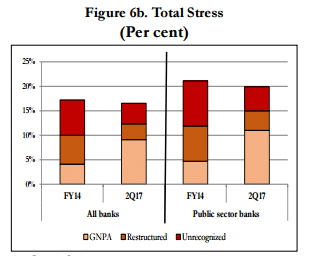 PSU Banks Are not Making Any Returns on Assets

While the international banks maintain a standard return on asset of 1.4% – 1.6%, Indian public sector banks aren’t there at all. Indian PSU banks have an return on assets of  below 0.5%. SBI which has a market share of roughly 20%, if excluded, the return on assets drops below 0%!

The Solution: A Bad Asset Bank

Though the report doesnt suggest any out of the box solution, it is of the opinion that a Public Sector Asset Rehabilitation Agency (PARA) might reign in the problem.
PARA, it suggests, should be an independent agency (just like GST network) with government owning 49% stake. This will be like a government backed ARC, which will take out all the bad debts from the banks and will maximise the recoveries or if necessary convert debt to equity and sell the stakes in auctions or grant debt reductions, depending on professional assessments.
According to the report, capital requirements for PARA can be funded via Government (issuing securities), Capital markets (private sector to take up equity share), RBI (transfer some of government securities to PSU Banks). The third part is crazy – why the RBI should do anything like this is not clear. (If anything, they should pay the government a dividend and the government should do something).
The obstacles may vary from favouritism, political influence and inflated bad debt pricing by banks. Plus, if you are able to get rid of your “bad assets” just like this, what’s to stop banks from building more bad assets similarly? With the political outrage against any bad loan being forgiven, it’s unlikely a PARA will come about.