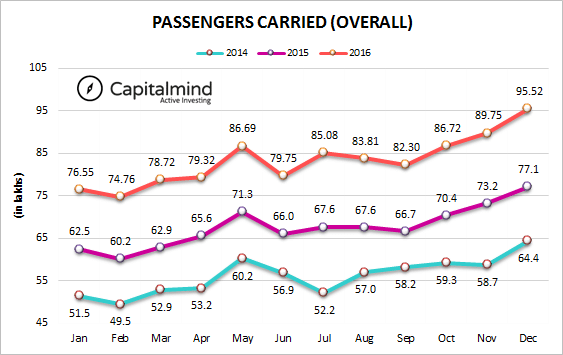 We bring you the “Domestic Airlines Report Card for India” for the month of December, 2016. We take a look at the Number of Passengers carried, Market Share of Each Carrier, Passenger Load Factor and others. (Here is the Report Card for November, 2016).
Here is an interesting TED-Ed Talk wherein Nina Klietsch explains: Why do airlines sell too many tickets?

“Have you ever sat in a doctor’s office for hours, despite having an appointment? Has a hotel turned down your reservation because it’s full? Have you been bumped off a flight that you paid for? These are all symptoms of overbooking, a practice where businesses sell or book more than their capacity. So why do they do it? Nina Klietsch explains the math behind this frustrating practice.“ 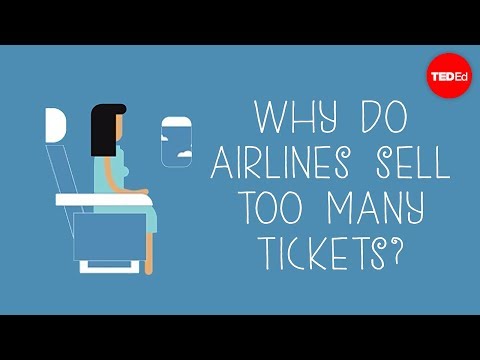 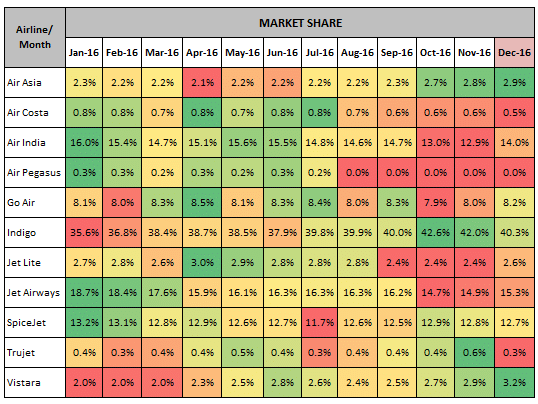 Indigo Airlines  – lost close to 2% market share to rival Air India and other airlines. Its new reduced market share for December stood at 40.3%.

Indigo has now received a total of 14 A320 neos (with 2 coming in during December). With this, the order book now has an outstanding 396 A320 neos and 20 A321 neos.
In December, Indigo issued a press release as it took delivery of its 13th Airbus A-320 Neo ‘VT – ITH’ aircraft to join its ever growing fleet on 27th December, 2016. With this aircraft, the airline now has a 125 aircraft fleet in its 125th month of operation.

A Christmas to remember 🙂 Santa made sure that our fleet is 125 planes strong in our 125th month of operation #gratitude pic.twitter.com/iBQnB1yKvu

The delivery of the 125th aircraft in the 125th month of our operation is indeed a landmark occasion for us. It reinforces our commitment towards the industry and living our promise of providing the best flying experience to our passengers. The entire IndiGo team has worked extremely hard to reach where we are today and we are raring to go. 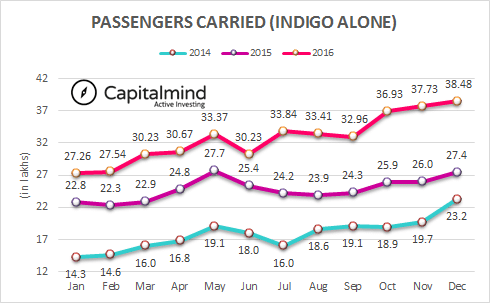 Indigo’s arch rival Spicejet was not far behind. On the 13 January, 2017 – SpiceJet signed a mega deal with Boeing (arch rival of Airbus to which Indigo has placed an odder with) for up to 205 jets making it the biggest order in airline’s history.

737 MAX will deliver 20 percent lower fuel use and the lowest operating costs in its class: CMD Ajay Singh #SpiceJetBigOrder

SpiceJet enhanced its existing order of 55 aircraft with additional 100 firm B737-8 MAX and 50 purchase rights for B737-8 MAX and wide-body aircraft. With this, the total order of 205 aircraft is valued at $22 billion (Rs. 150,000 crores) at list prices.
Ajay Singh, Chairman and Managing Director, SpiceJet said:

The Boeing 737 class of aircraft has been the backbone of our fleet since SpiceJet began, with its high reliability, low operation economies and comfort. With the next generation of B737 and the B737 MAX we are sure that we can be competitive and grow profitably.

We are honored to build upon more than a decade of partnership with SpiceJet with their commitment of up to 205 airplanes. The economics of the 737 MAXs will allow SpiceJet to profitably open new markets, expand connectively within India and beyond, and offer their customers a superior passenger experience.

Well, even Air India managed to make it to the news section this time. For the first time in the world, Air India becomes the airline to reserve seats for women passengers. Six seats in the front rows of plane will for women only.
Air India chairman and managing director Ashwani Lohani sid:

We will be reserving the third row — six seats — in the economy class of the aircraft for female passengers travelling alone. We feel, as national carriers, it is our responsibility to enhance comfort level to female passengers. There are a lot of female passengers who travel alone with us and we will be blocking a few seats for them.

Passenger load factor, or load factor, measures the capacity utilization of public transport services. It is generally used to assess how efficiently a transport provider “fills seats” and generates fare revenue.
Worth mentioning the fact that 5/10 airlines witnessed their best load factor in December (compared to the whole year). Indigo breached the 90% mark with 91.4% load factor, Jet breached the 85% mark at 86.1% and Vistara for the first time leapfrogged from 74.4% in November to 85.1% in December. 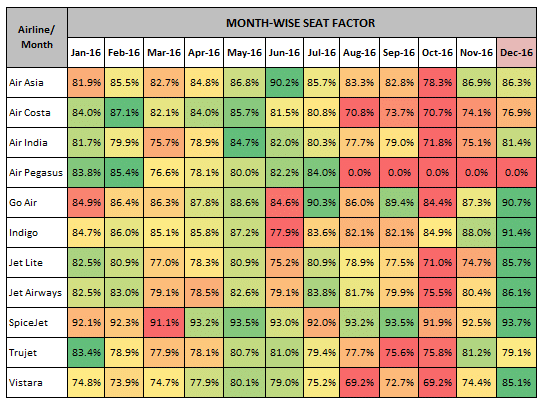 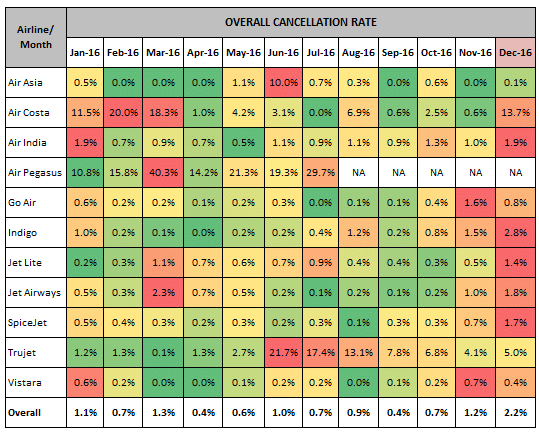