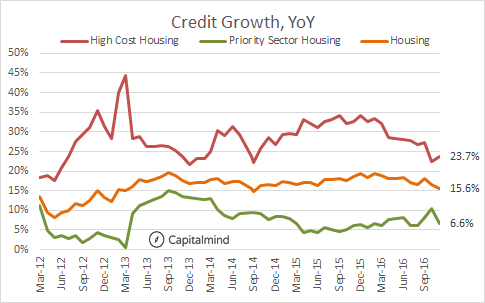 As we get more data on the demonetization, the hit in November comes to light. The November credit data shows how the situation has changed. 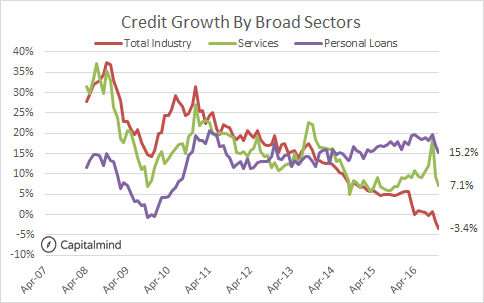 While credit growth in Industry is below zero (it’s contracting) there is still growth in Services and Personal loans. (Agriculture is growing at 10% too, not shown in the graph.

Credit to Industry – larger, medium and small – is contracting. Large Industries, which borrow over 21 trillion rupees (the largest single borrowing category) has been seeing credit growth percentages fall over time (it used to grow at 20% five years back).
The recent recovery in credit in MSMEs and Medium industry has reversed substantially in November. 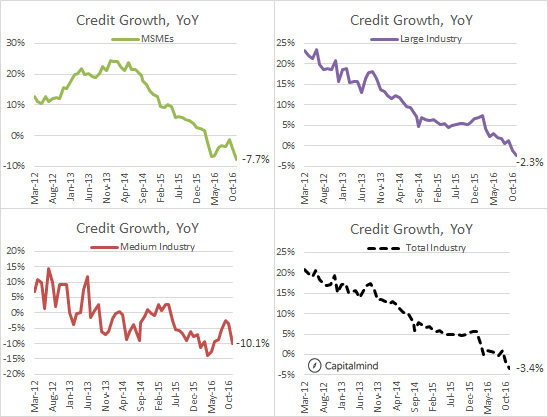 Housing Keeps Its Head Up. But Not Low Cost Housing

Credit to housing has been steadily growing around 15% to 20% and that continues. However priority sector housing credit – typically to smaller, cheaper houses – has fallen in terms of growth, to just 6.6%. Meanwhile Higher cost housing grows at more than 23%.

Both wholesale and retail trade reduced their borrowing in November (compared to October). Year on year growth is still positive. December figures might change as the recovery unfolded a little. 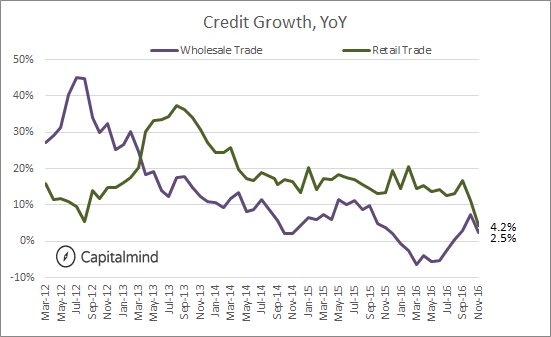 Where banks can borrow from deposits, most NBFCs take loans from banks. That dropped sharply in the last two months and credit has now been flat in November.
NBFCs include Housing Finance Companies, Microfinance institutions, lenders like Bajaj Finance and so on. Our View: Lousy. December Should Be Better

Banks have been busy exchanging notes. There’s been very little time to push credit.
And then industries have been on the backfoot, as has trade. No fresh commitments, no new investment.
This could change as the situation stabilizes. However, some of the drop in credit growth could generate NPAs as some of the businesses that run on thin margins and rapid cash flow will probably have died. Jobs have been lost. The retail default situation is low in India, and that might be about to change.
December data is likely to be more cheerful, but the impact of demonetization has been heavy, on nearly all the large sectors of the economy.